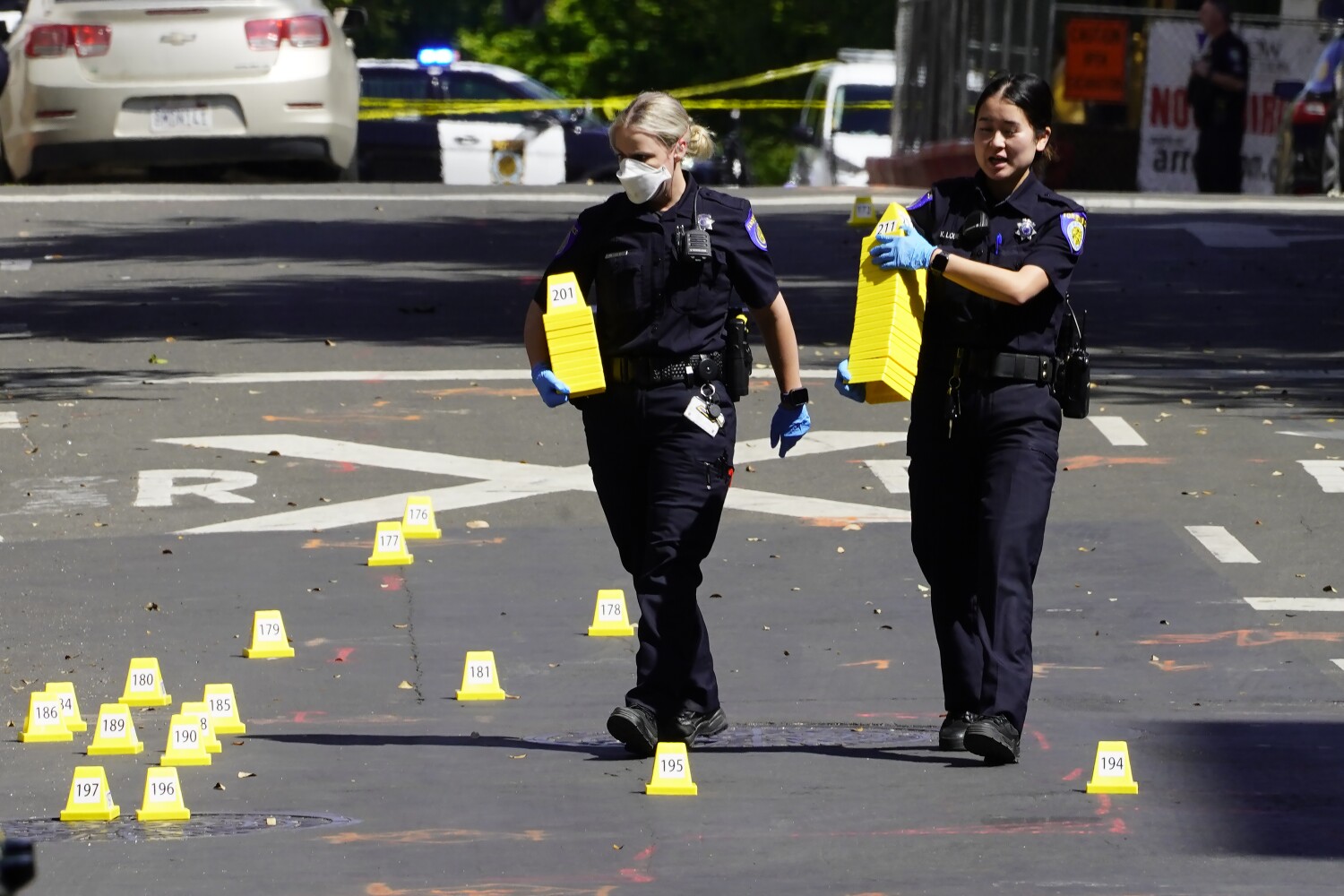 Three people who were killed in the April 3 downtown Sacramento shootout that left six dead and a dozen others injured were associated with gangs and involved in a conflict that preceded the deadly incident, Sacramento County prosecutors allege.

A court filing reviewed by the Sacramento Bee details new information on the timeline of events leading up to the early morning shooting, when an estimated five suspects opened fire down the street from the state Capitol as nightclubs emptied about 2 am

Prosecutors said three men killed that night – Joshua Hoye-Lucchesi, Devazia Turner and Sergio Harris – were linked to gangs, and that tension was brewing between two rival groups in the minutes before the shooting, the Bee reported Saturday.

Officials in the Sacramento County district attorney’s office said Sunday that the filing should be made available by Monday.

Three suspects named so far include brothers Dandrae and Smiley Martin and Mtula Payton. Dandrae Martin, 26, was booked into Sacramento County Main Jail and charged with being a felon in possession of a gun. Smiley Martin, 27, is hospitalized and recovering from injuries sustained in the shooting. Police are still searching for Payton, 27, who is wanted on multiple felony warrants.

According to the 13-page filing, an Instagram video posted before the shooting showed the Martin brothers and Hoye-Lucchesi, 32, posing together with several firearms, the Bee reported. In the clip, “both Joshua Hoye and defendant Smiley Martin discuss going to downtown Sacramento while armed to loiter outside nightclubs, display gang hand signs to the camera, point firearms at the camera, openly and repeatedly state their allegiance to the Garden Blocc Crips ( ‘GBC’) and boast about shooting rival gang members, ”the filing says.

The filing alleges that the three then traveled to Sacramento. Later, surveillance video captured a person in black clothing standing next to Smiley Martin on K Street and, just before 2 am, that person “raised their right arm parallel to the ground while pointing northbound on 10th Street in the direction of Mtula Payton and Devazia Turner. ”

Turner, 29, and Payton are allegedly members of the G-Mobb gang. Joined by Harris, a 38-year-old identified as a member of the Del Paso Heights Bloods, Turner and Payton then started moving toward the corner where the Martin brothers and Hoye-Lucchesi were standing.

Shortly after, Turner and Smiley Martin allegedly began exchanging gunfire. It’s unclear why the two groups of men were fighting.

Hoye-Lucchesi, Turner and Harris died in the shootout, along with two women, Johntaya Alexander and Yamile Martinez-Andrade, both 21. Melinda Davis, 57, a homeless woman well known along the downtown corridor, was also killed.

The district attorney’s office filed the documents on Friday in Sacramento County Superior Court requesting that Smiley Martin be ineligible for bail release after he was booked into jail, alleging “clear and convincing evidence” that he “intended to engage in armed criminal action with an illegal firearm. ”

Police said on April 5 that once Smiley Martin recovered, “he will be booked at the Sacramento County Main Jail for possession of a firearm by a prohibited person and possession of a machine gun.”