Manchester United could look at Juventus’ Paulo Dybala in the summer. The forward is out of contract in June and the Serie A side have confirmed he will leave them as a free agent at the end of the season.

Inter Milan and AC Milan are the two Italian clubs credited with an interest in the 28-year-old. The Red Devils, on the other hand, are named as one of his suits from the Premier League, by TuttoMercatoWeb.

Manchester United are set to appoint Ajax boss Erik ten Hag as their next manager, after already reaching a verbal agreement with him. As part of the Ten Hag revolution, the Argentina international could become a ‘hypothesis’ in the next window.

TMW states: ‘It seems a plausible path, with the Red Devils who will have to change in front and not just in front: the Argentine, for a team that wants to play the ball on the ground, with men of great imagination, can be one of the most credible goals. ‘

Friday’s edition of Corriere dello Sport explained ‘there is also Manchester United’ as they are ‘still on the horizon’ for the former Palermo man.

It’s claimed the Manchester club were the latest top European side to move for the player. The intermediary working on behalf of the South American for the past few weeks had a meeting in England with the Old Trafford club.

This is a ‘significant appointment, because it is dictated by the future strategies of the Red Devils, who are close to announcing the new coach’.

The report adds Ten Hag ‘greatly appreciates the quality and class’ of Dyabla and referred his name to Manchester United officials. The Dutchman is ‘the key’ for them to have any chance to sign the Argentine on a free transfer in the summer. 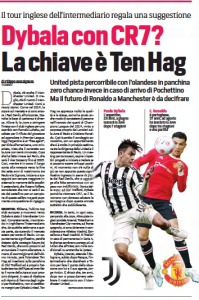 If United end up appointing Mauricio Pochettino as their next manager, then there is ‘zero chance’ for the attacker to join them.

As per the newspaper, the meeting between Dybala’s agent and the Premier League side took place at the beginning of this week. This was done to ‘get to know each other, understand their respective projects and begin to see if there can be positive developments’.

Despite the meetings between Manchester United and the player’s camp, Corriere make it clear ‘there is nothing more than a significant entry’ from the Old Trafford club in the chase for Dybala.