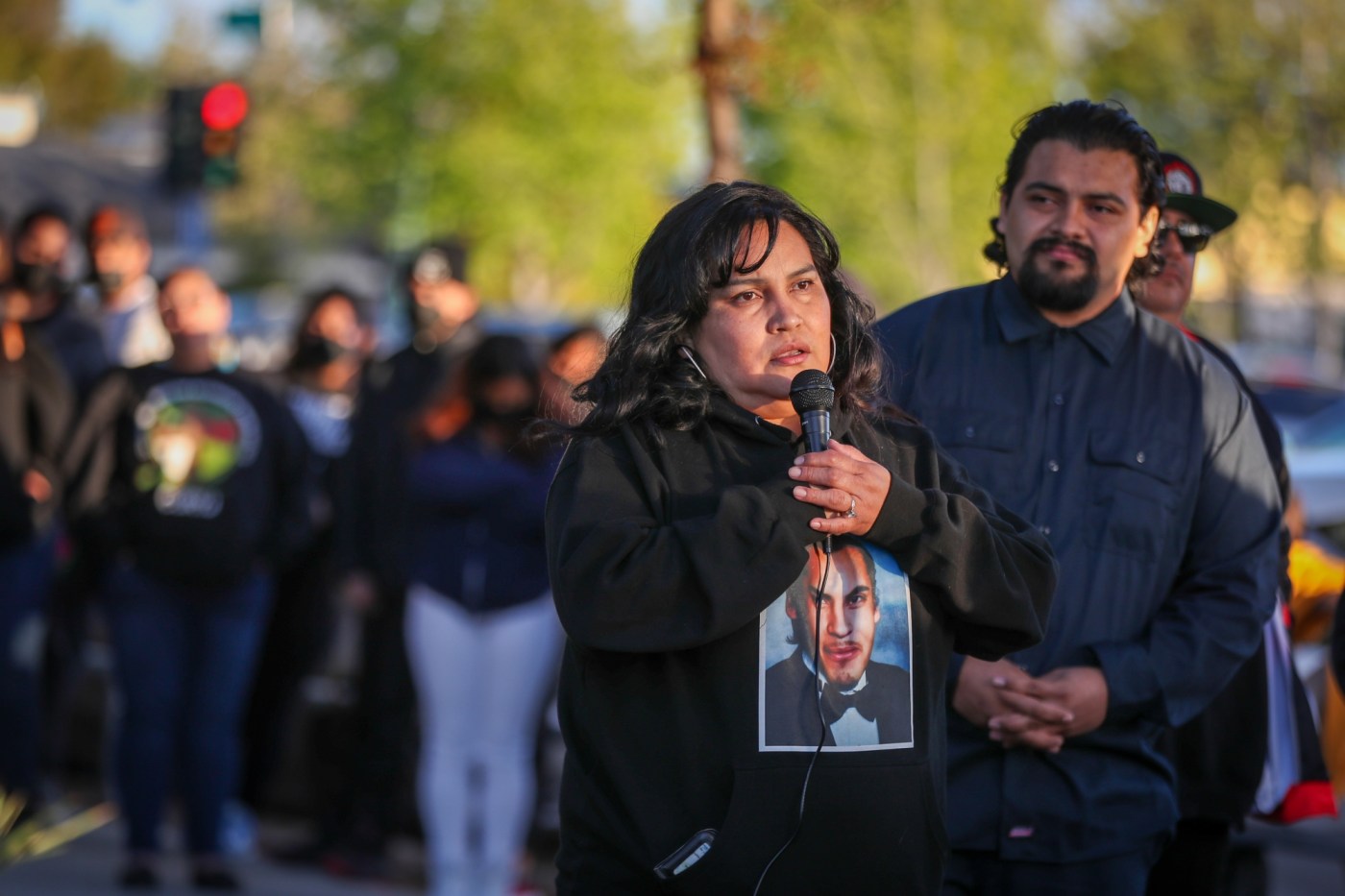 ALAMEDA – Under trees bearing a banner with Mario Gonzalez’s face, more than a hundred people gathered Tuesday to share grief over his death in police custody a year ago, as well as resolve to seek justice in his name after the Alameda County District Attorney’s decision not to pursue criminal charges against three officers.

After songs sung and played by mariachi musicians, dances and ceremonial salutations performed by a troupe, sage smudging and flowers and balloons offered in every hue and shade, family members, community activists, friends and residents filled a small park just off the city’s Park Street corridor Tuesday night and listened as speakers sought to ground yearning and loss with beauty and ceremony.

Ericson Amaya, a Deep East Oakland resident and lead organizer with 67 Sueños, joyfully remembered Gonzalez: “Man, if you knew Mario, he would put you up. He would put a smile on your face. If you had a bad day, he was there for you. I went to school, just like many other folks that are here today attended school with Mario Gonzales, and we believe the decisions that the DA made are completely unjustified. ”

“It’s been a long year, and just the way we’ve been treated, not just by the legal process, but just how we get to know certain information, like we found out through the media that they were not being charged, ”Geraldo Gonzalez said.

“We just felt like we’re being overlooked in a way […] we’re just showing that my brother was a human and he needs to find his justice, one way or another. ”

“You know, it’s one year,” Edith Arenales said in part. “All the time when I come to this park, you know, I remember feeling broken, you know, I can not even talk […] It’s hard to say something right now, but the only thing I can say is thank you for coming. ”

Members of other families still reeling from the loss of loved ones at law enforcement’s hands came to offer solidarity and support. Amanda Blanco, the sister of Erick Salgado, said that “just like Mario’s family, I also found out through the media about the DA’s decision, and we are very much kept in the dark about a lot of things. We feel helpless at times. I know at least I do. ”

Addie Kitchen, grandmother of Steven Taylor, echoed Blanco’s sentiments. “My grandson’s first anniversary was the 18th of April of 2021. And we celebrated his death on the 18th. And then on the 19th, we heard about Mario, ”Kitchen said.

“There’s a lot of disappointment and frustration with the legal process as relating to these officers not being criminally prosecuted,” said Adanté Pointer, a civil-rights attorney representing Gonzalez’s mother in one of the suits against the city and police department.

“But there’s just as much of a commitment and resolution, if you will, to make sure that the truth comes out in justice, whether that be in the civil process, or trying to make sure these officers never patrol the streets, in the name of the public.

“You know, a 26-year-old young man should not be dead when the police come out to investigate. So that means that there’s a lot of failures, if you will, in the training, in the way the training has been implemented, and also in the way in which the officers are supervised. That needs to be corrected, so that there’s not a single family that has to go through this again. ”