A report into Alec Baldwin’s fatal shooting of Halyna Hutchins on the set of Rust has found management “knew that firearm safety procedures were not being followed”.

They said it “demonstrated plain indifference to employee safety by failing to review work practices and take corrective action”.

Cinematographer Hutchins died after a prop gun held by Baldwin was fired during rehearsals in October 2021.

The actor was one of the film’s producers, as well as its star.

“This is a complete failure of the employer to follow recognized national protocols that keep employees safe.”

The report included testimony that managers took limited or no action over two previous misfires.

It also documented safety complaints that went unheeded and said weapons specialists were not allowed to make decisions about extra training.

The company’s documents indicated it would follow guidelines but it failed to do so, added the Occupational Health and Safety Bureau (OHSB) report.

Not bringing live ammo onto any studio or lot; holding daily safety meetings; and that staff “refrain from pointing a firearm at anyone” except after consulting the armourer or other safety rep.

Rust Movie Productions said it disagrees with the findings and plans to appeal.

“Our thoughts and prayers remain with Halyna’s family,” it said.

Lawyers have said the gun fired after Baldwin pointed it out to Ms Hutchins during a scene set-up. The film’s director, Joel Souza, was also injured.

Baldwin has said he was pointing the gun at Ms Hutchins at her instruction, and that it went off without him pulling the trigger.

He is currently facing several lawsuits, including from script supervisor Mamie Mitchell and head of lighting Serge Svetnoy, as well as Ms Hutchins’ family.

A separate criminal investigation is ongoing.

In a December interview, Baldwin said that while he “would go to any lengths to undo what happened”, he does not feel guilt over the fatal shooting – saying that while “someone is responsible for what happened … I know it’s not me “. 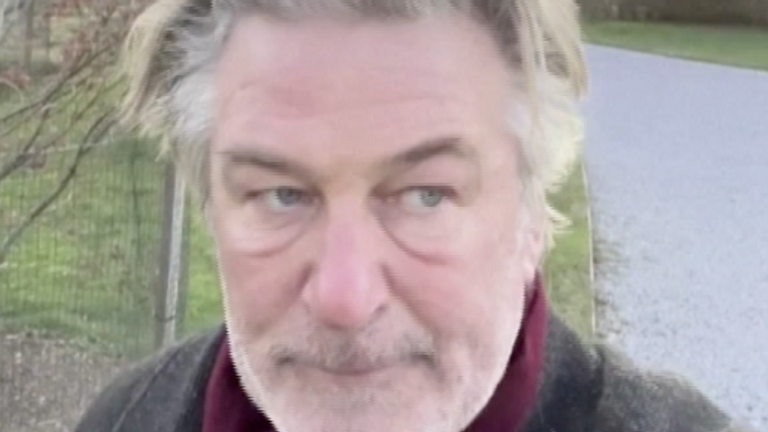 December 2021: ‘Hutchins’ death will never be behind us’

The incident also resulted in calls from politicians for increased state-sponsored firearms training.

Hutchins, 42, grew up on an army base in the Russian Arctic, where her father served in the navy, before moving to Los Angeles to study film.

She was considered a rising star in her field.