The Duke and Duchess of Cambridge’s private photographer has offered a behind-the-scenes look at the couple’s recent royal tour of the Caribbean.

Prince William, 39, and Kate Middleton, 40, paid to have photographer Matt Porteous join them in Belize, Jamaica and the Bahamas, inviting him to capture some of their most intimate moments, including their private scuba diving trip.

Matt, who has worked with the Cambridges for years and was Pippa Middleton’s wedding photographer, said it was a ‘true honour’ to photograph the couple as he shared a selection of his favourite snaps on Instagram yesterday.

The private album includes previously unseen snaps of William and Kate disembarking their private jet and greeting well-wishers on walkabouts. 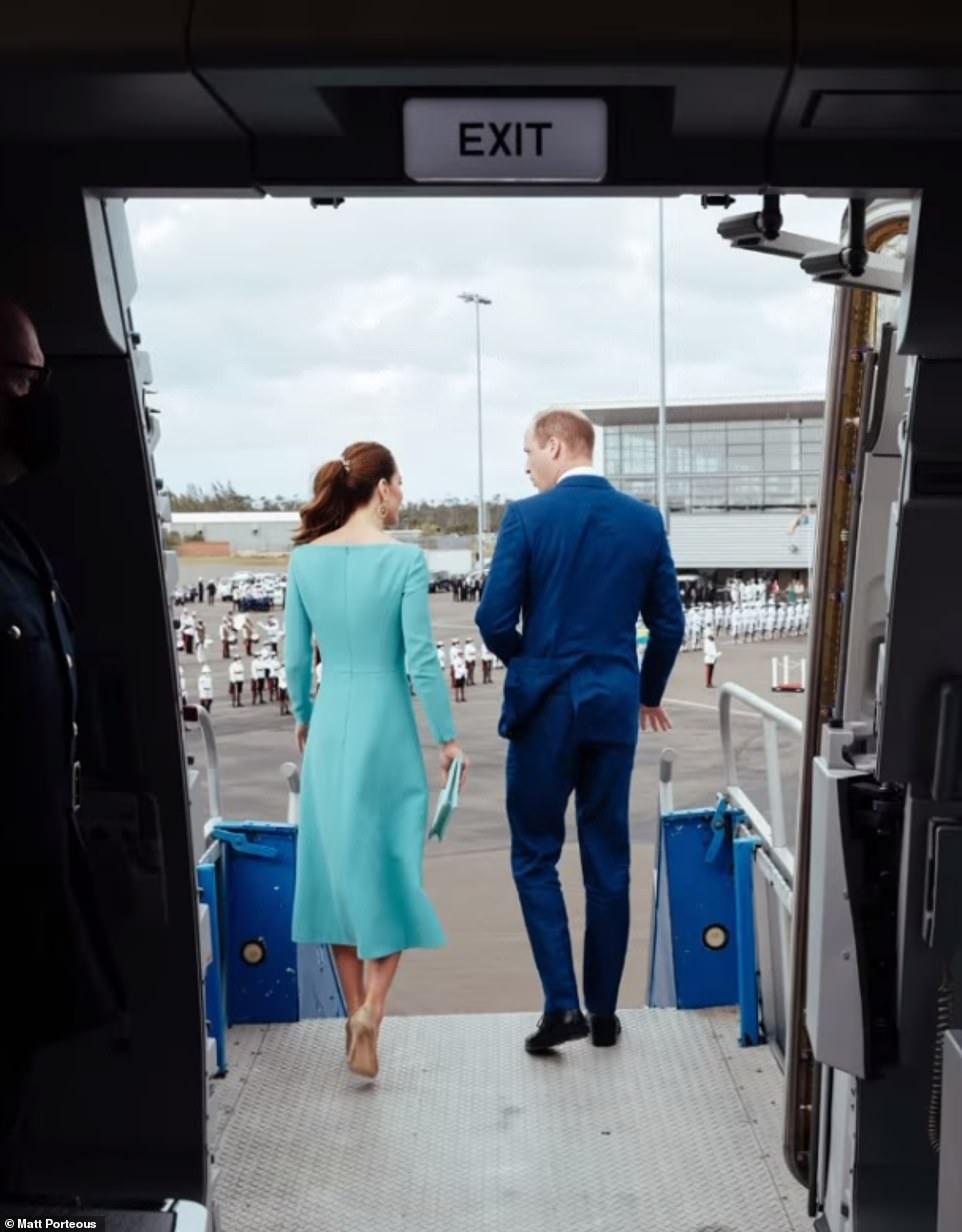 Unseen snaps: The Duke and Duchess of Cambridge’s private photographer has offered a behind-the-scenes look at the recent royal tour of the Caribbean, including this unseen photo of the couple disembarking their plane in the Bahamas 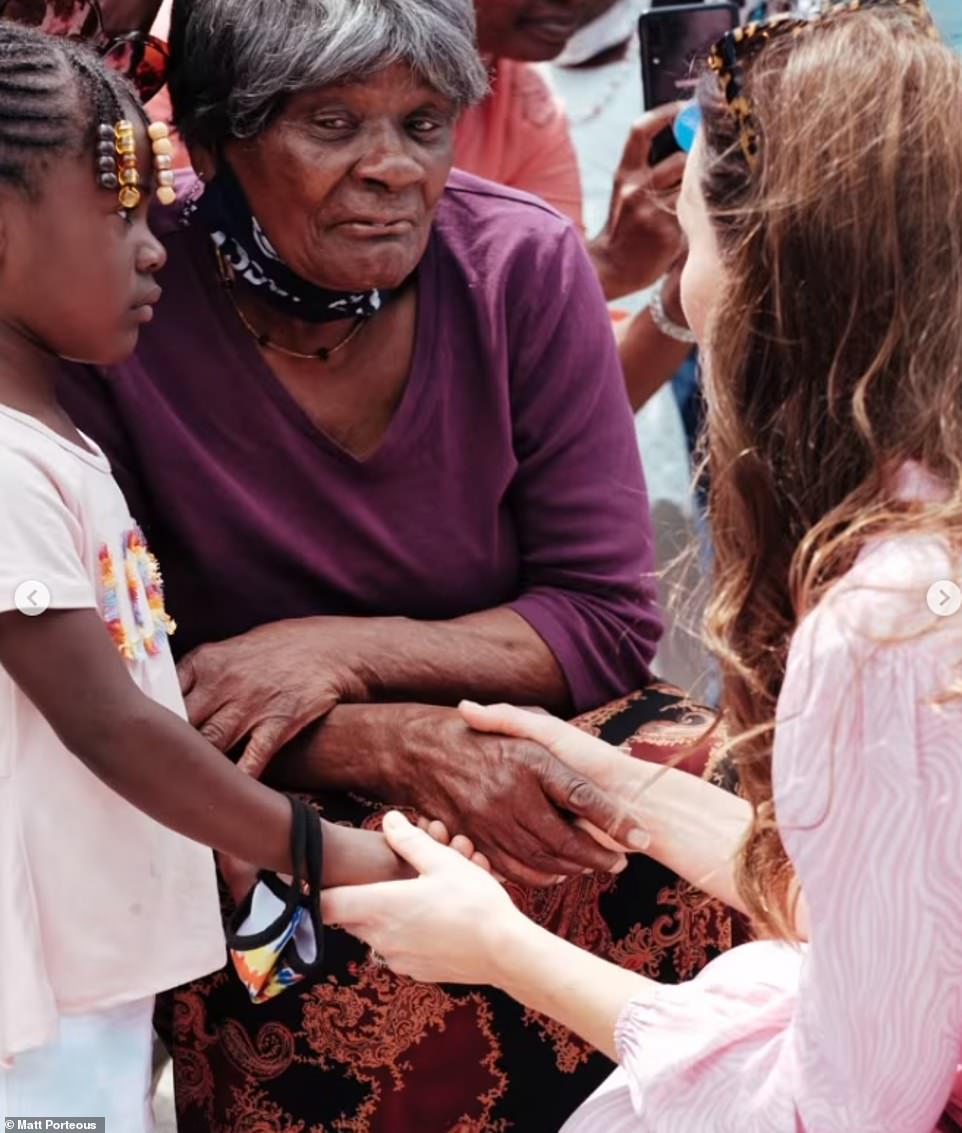 Royal walkabout: This photograph, which has never been seen before, shows the Duchess of Cambridge holding hands with an elderly woman and a young girl in the Bahamas. It was taken by their private family photographer Matt Porteous 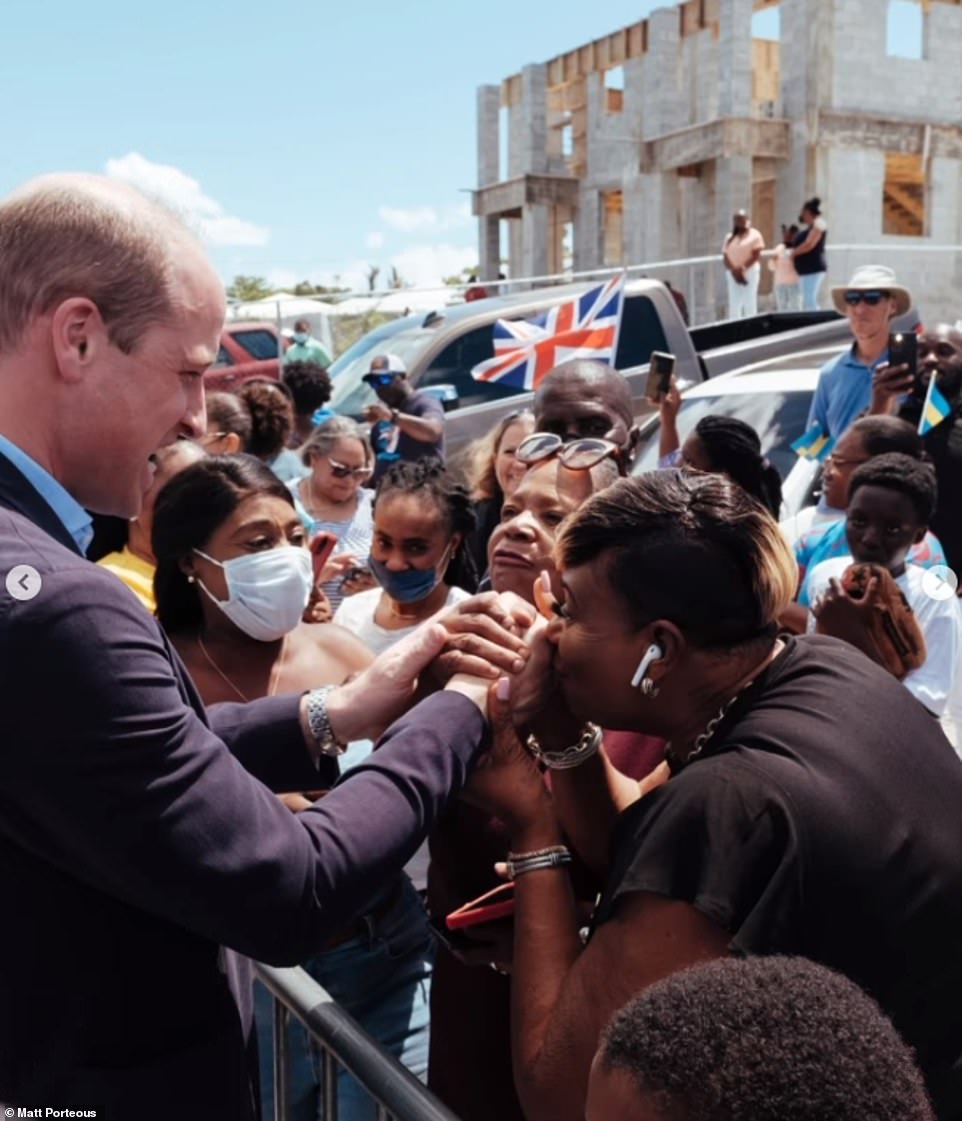 A kiss for the prince! In this playful snap taken in the Bahamas, a well-wisher leans in and kisses the Duke of Cambridge’s hand. It is among the unseen photos that was shared by Matt Porteous on Instagram yesterday 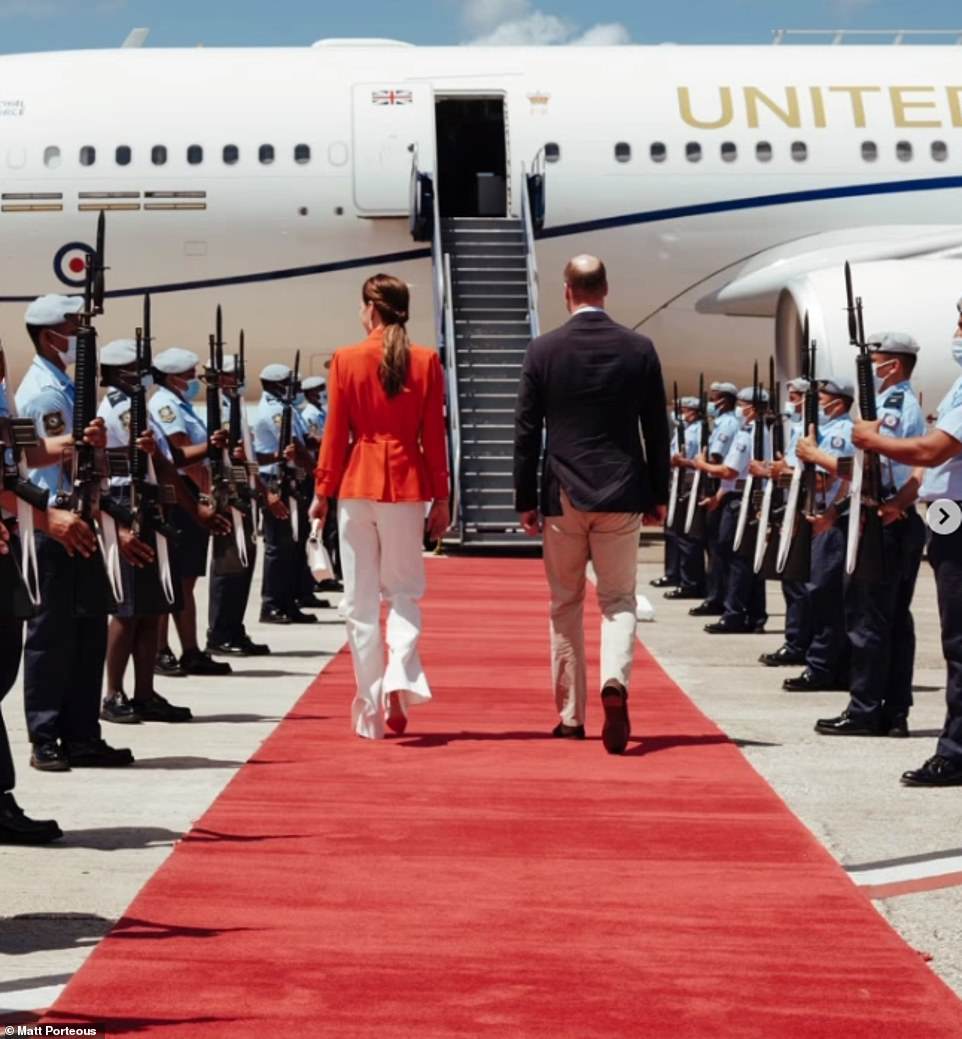 Boarding their plane: Matt, who was given exclusive access to the couple, captured this atmospheric shot as they boarded their private jet in Belize. It is one of the never-before-seen photographs he shared with his Instagram followers yesterday

Matt wrote: ‘It was a true honour to document The Duke and Duchess of Cambridge on their week-long tour of the Caribbean last month.

‘Here are some highlights of the beautiful people, friendly smiles, breathtaking landscapes and pristine oceans we saw along the way.’

The photographer has worked with the Cambridges on a number of occasions.

He was invited to take photographs at Prince Louis’ Christening in July 2018, as well as photographs released to mark the Duchess of Cambridge’s birthday. 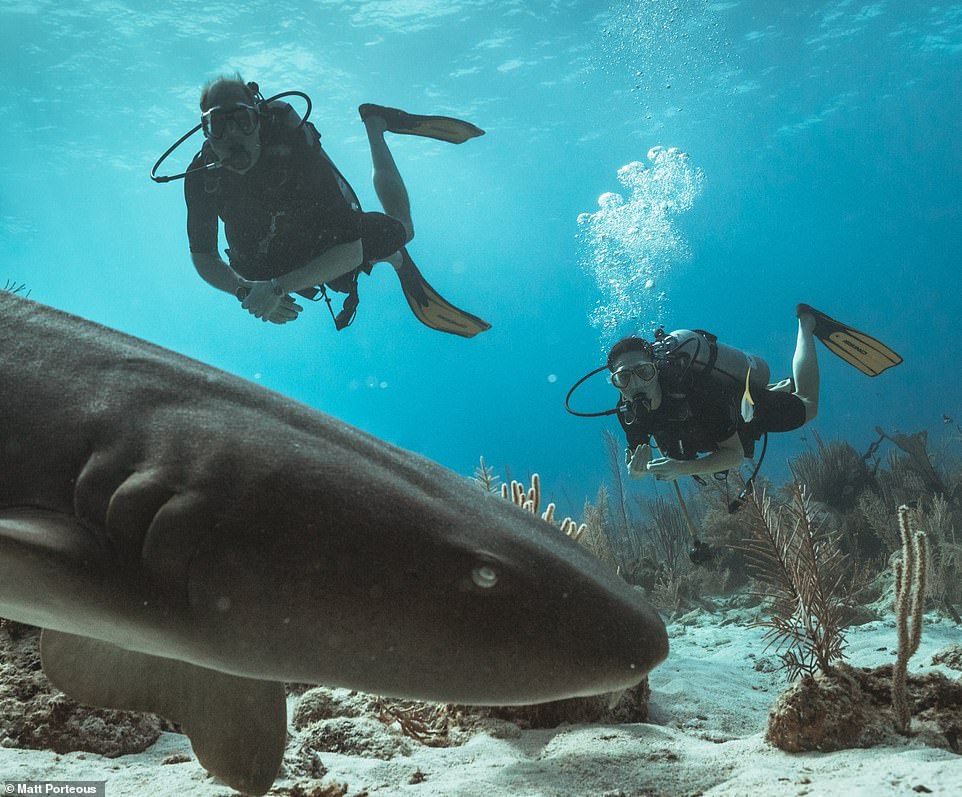 Intimate look: Matt was also responsible for capturing the couple on their private diving trip off the coast of Belize, pictured 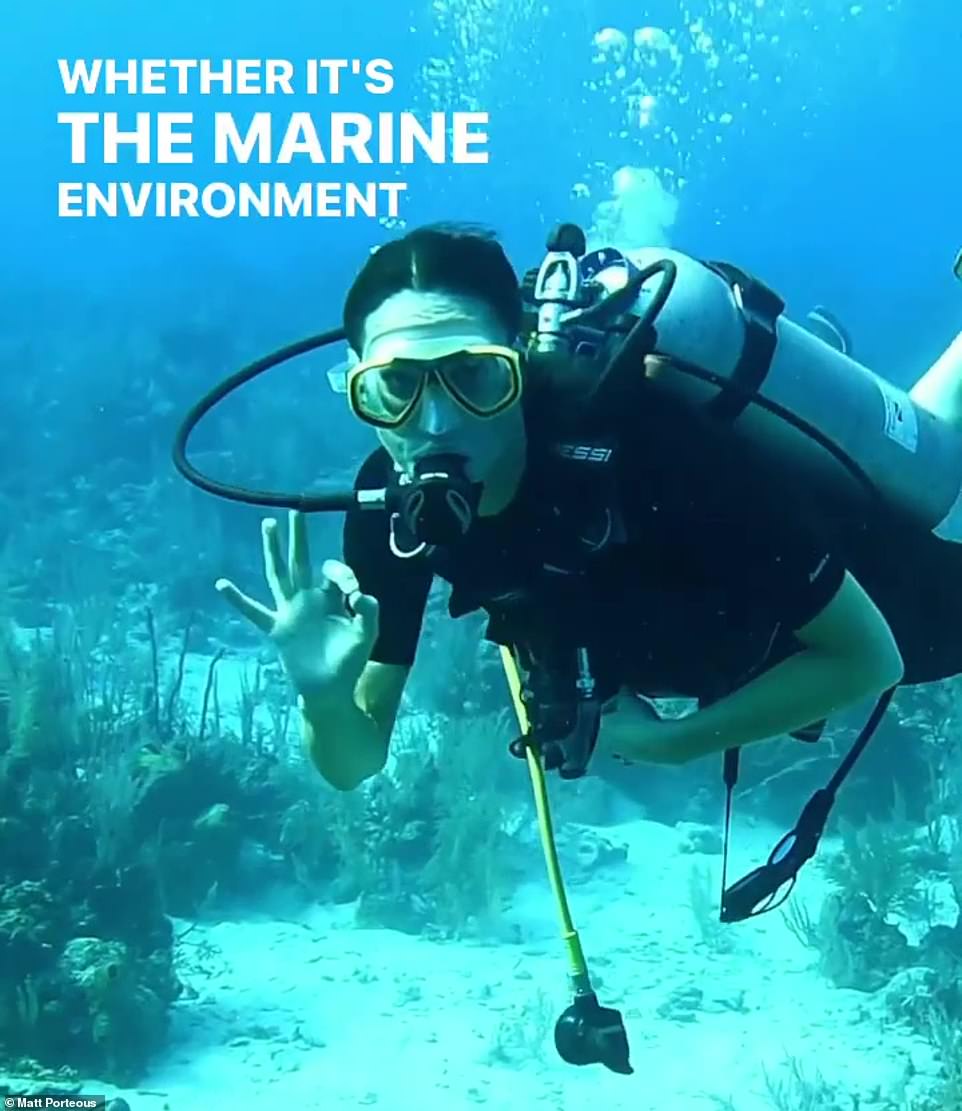 Environmental focus: Matt, who is founder of underwater community group Oceanculture.life, captured a film of the couple

One of his photographs was selected for the Cambridge Christmas card.

Matt joined the Caribbean tour in a private capacity, meaning the couple paid for his services out of their own accounts rather than the public purse.

He accompanied William and Kate as he carried out their engagements and was granted access not given to other press photographers on the tour.

Matt’s photographs were shared on the Duke and Duchess of Cambridge’s Instagram page throughout the tour as a way to keep their 13.5million fans updated.

One striking unseen photograph shows the Duke and Duchess of Cambridge boarding their plane in Belize, taken from behind on the tarmac. 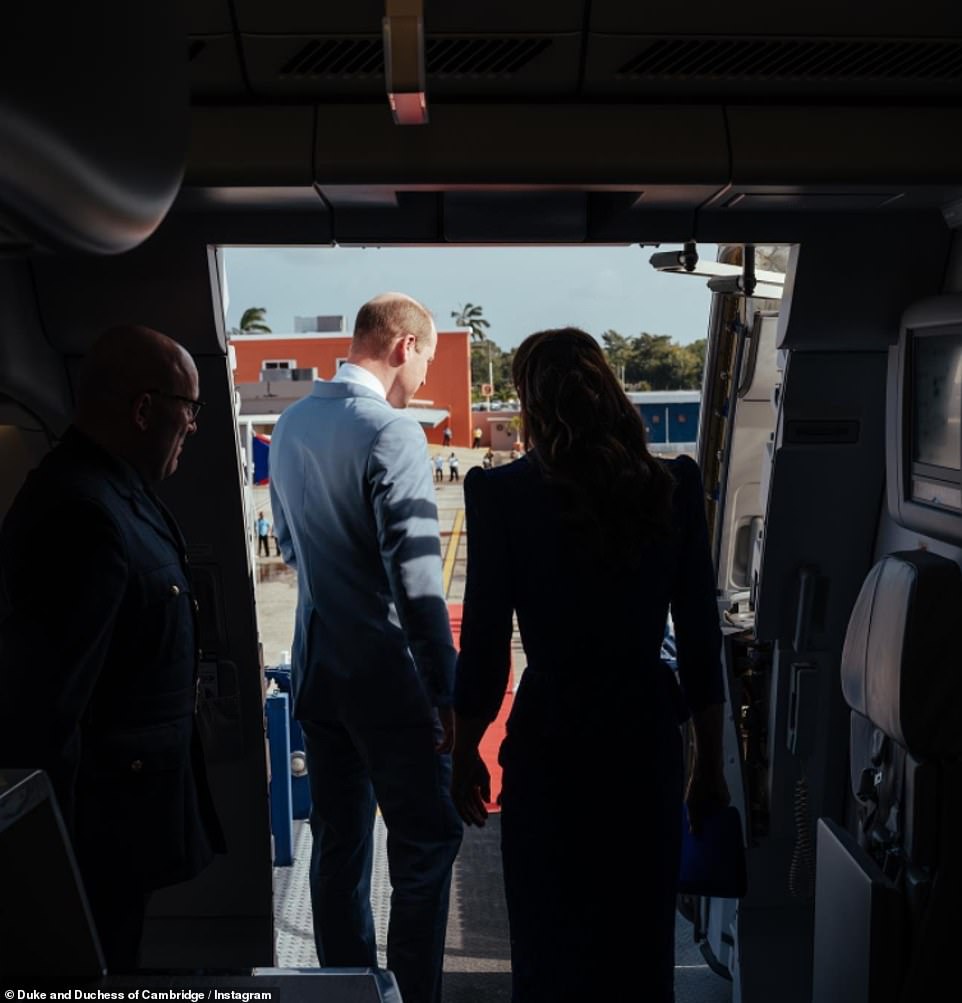 Movie star edge: The Duke and Duchess of Cambridge shared Matt’s photos throughout the tour to keep their 13.5million Instagram followers updated on every step of their journey. This photo showed them stepping off the plane in Belize 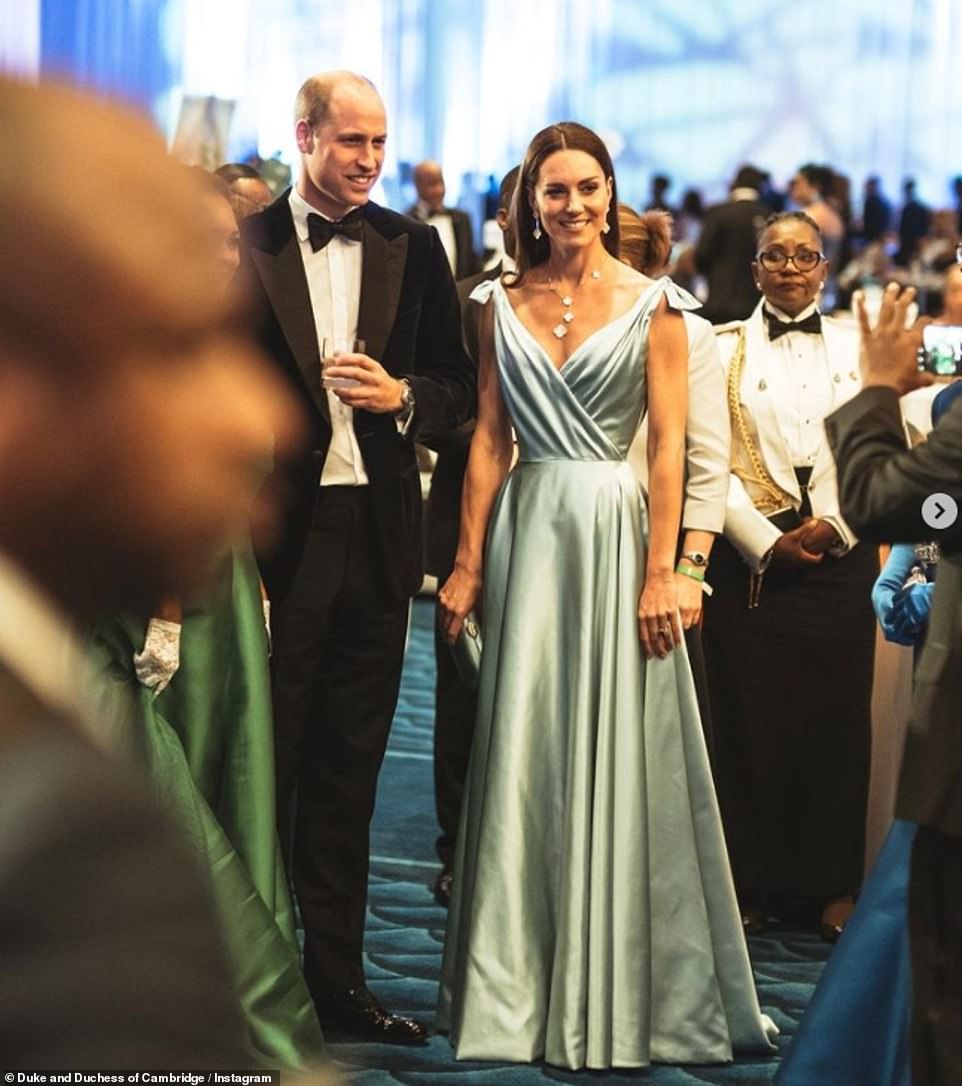 Black tie brilliance: Matt joined the couple at a glittering reception held by the Governor General of The Bahamas 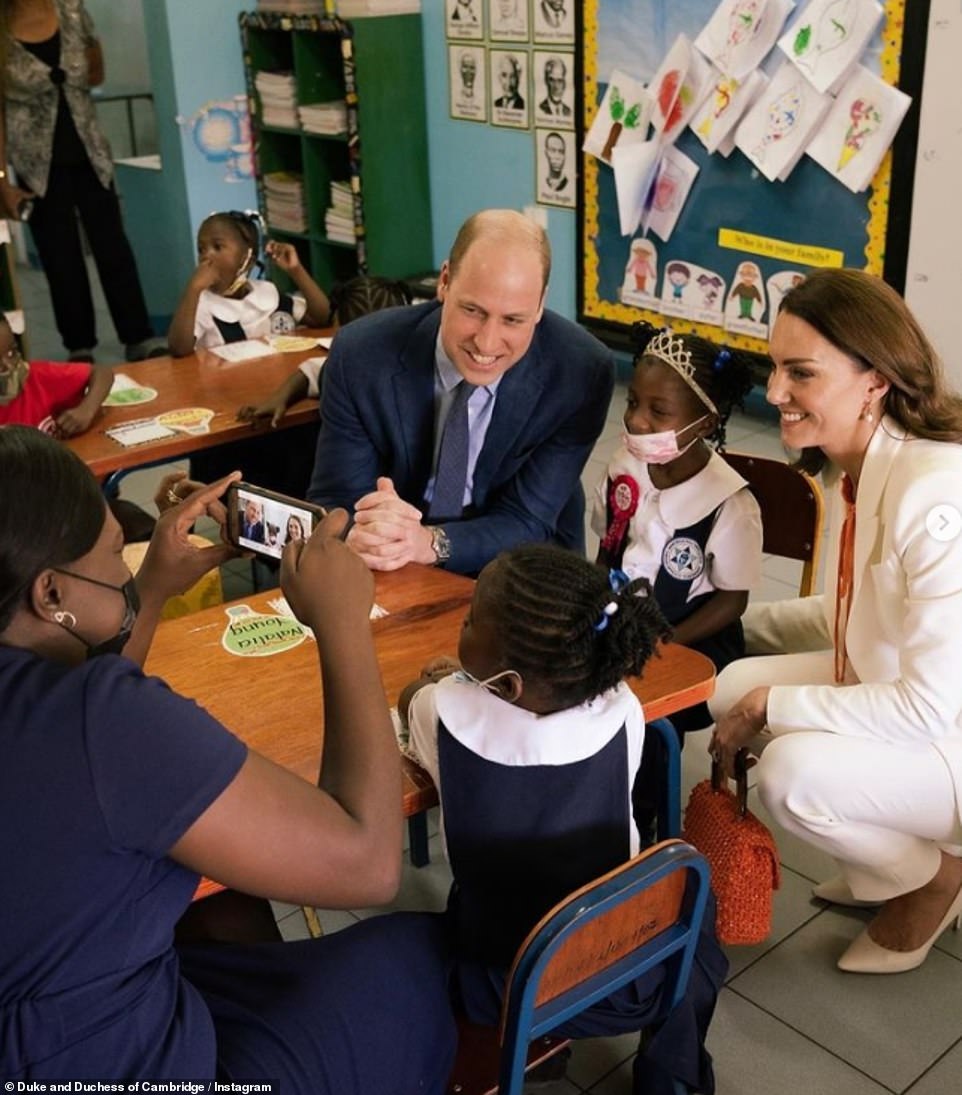 In their natural element: Matt captured this sweet photograph of William and Kate at an education centre in Kingston, Jamaica 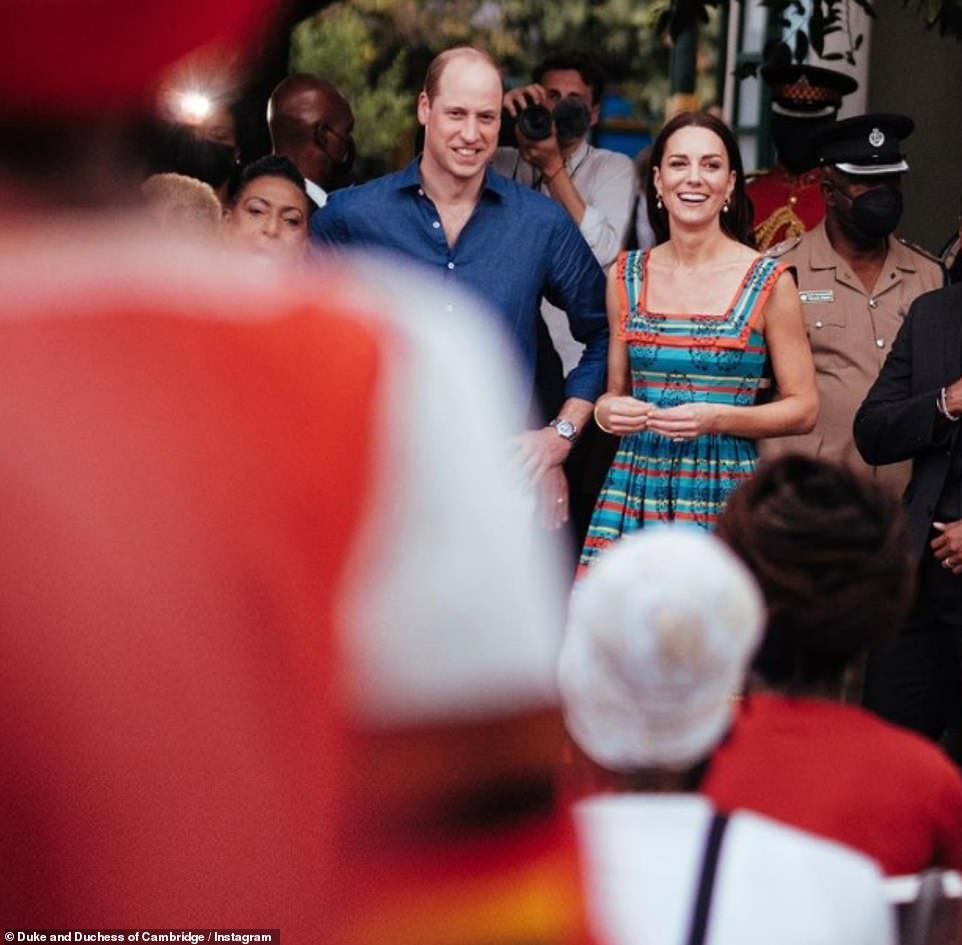 On the ground: Matt captured this photo of the couple at Trench Town, the birthplace of reggae music in the heart of Kingston 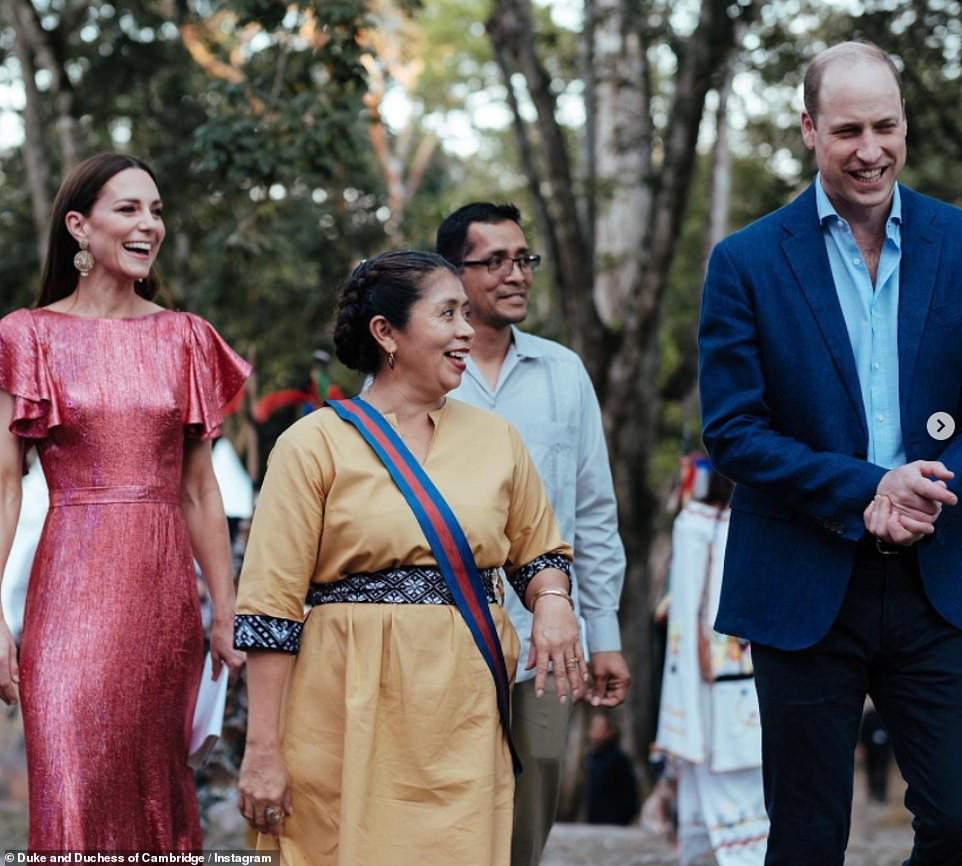 Relaxed: The Duke and Duchess of Cambridge are seen sharing a smile at an evening event in a photo taken by Matt Porteous

The Duchess is wearing her striking vintage blazer and white trousers, while William is dapper in a suit.

Another photograph, taken from inside the private royal jet, shows Kate and William disembarking in the Bahamas with the airport in the background.

There are also snaps of the Duke and Duchess of Cambridge greeting well-wishers during an outing in the Bahamas.

In one photo, a woman is seen kissing Prince William’s hand. In another, Kate, dressed in her pink Rixo frock, crouches down to hold hands with an elderly woman and a little girl who had waited to see her.

The Duke and Duchess of Cambridge were joined by Matt when they went swimming with sharks off the coast of Belize.

The pair were seen swimming alongside each other and giving the OK hand signal as they inspected the coral and marine life following a private invitation by the country’s government to see conservation work.

Matt captured a candid clip of the outing which was later shared on the Kensington Palace Instagram account. 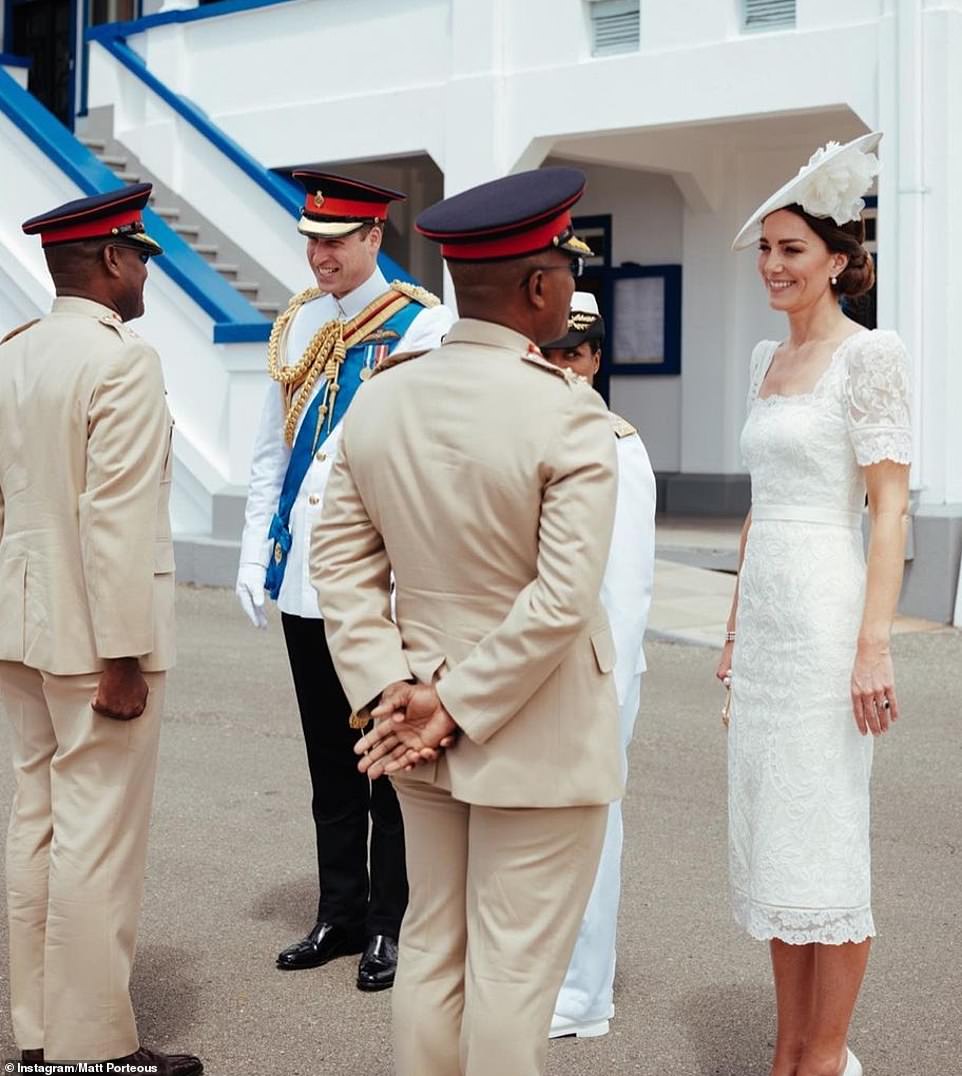 Key moments: Prince William and Kate Middleton shared this photo taken by Matt at the inaugural Commissioning Parade for the Initial Officer Training Programme at the Caribbean Military Academy in Kingston, Jamaica 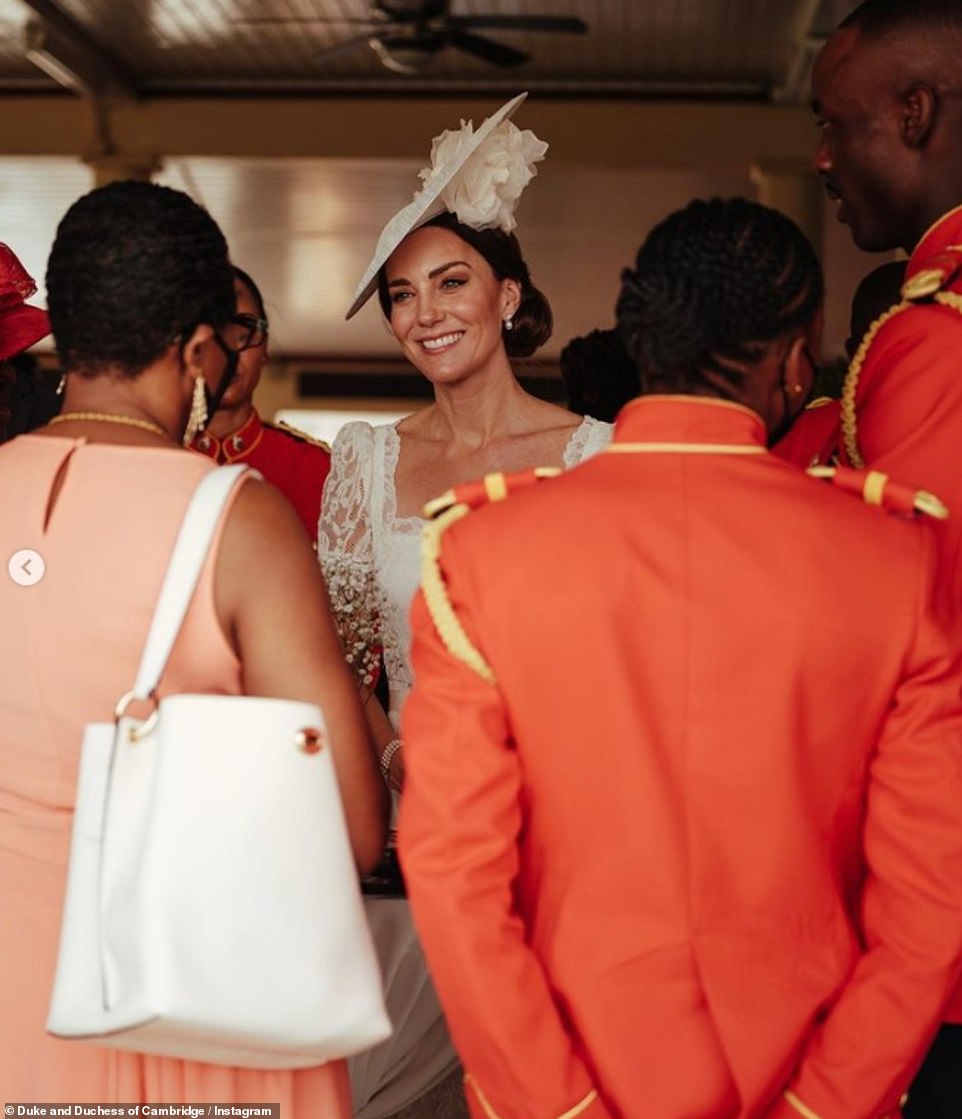 Keeping followers updated: The couple also shared this snap of the Duchess of Cambridge, taken by Matt on tour 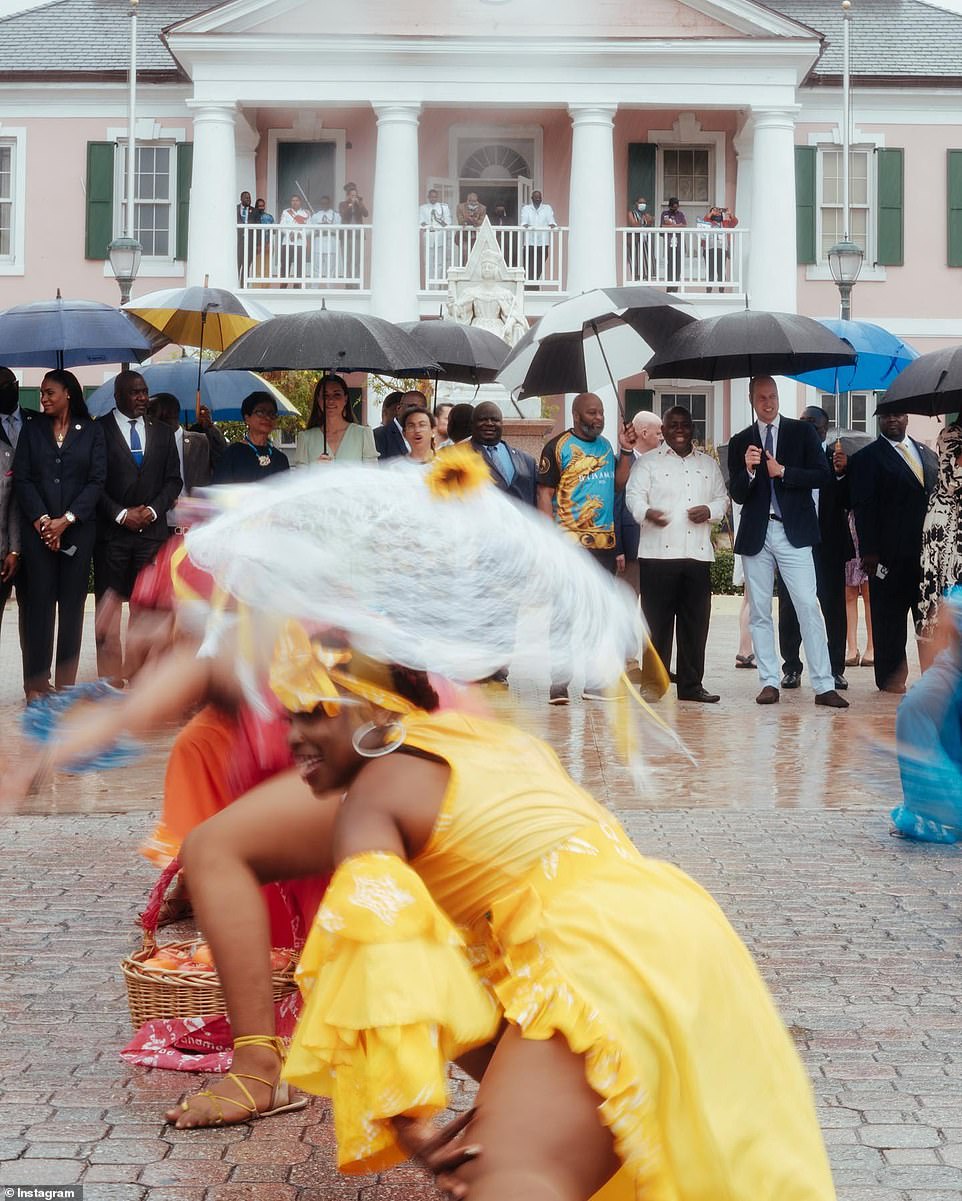 Vibrant: The Duke and Duchess of Cambridge previously shared this photograph, taken by Matt, showing the warm welcom they were given to Kingston, Jamaica

And the family snaps you’ve seen before! How famed wedding photographer Matt Porteous has captured some of the Cambridges’ most intimate moments – from Prince Louis’ Christening to their family days in Norfolk

After starting out by taking photos underwater, environmentalist Matt Porteous has become one of the most sought after wedding photographers in the world, capturing brides and grooms in truly jaw-dropping locations.

Clients include Pippa Middleton and James Matthews, Ellie Goulding and Casper Jopling, and George Spencer-Churchill, Marquess of Blandford, who married his bride Camilla at Blenheim Palace.

For the last five years he has also served as the private photographer to the Duke and Duchess of Cambridge, a role which allows him exclusive access to some of the family’s most intimate moments. 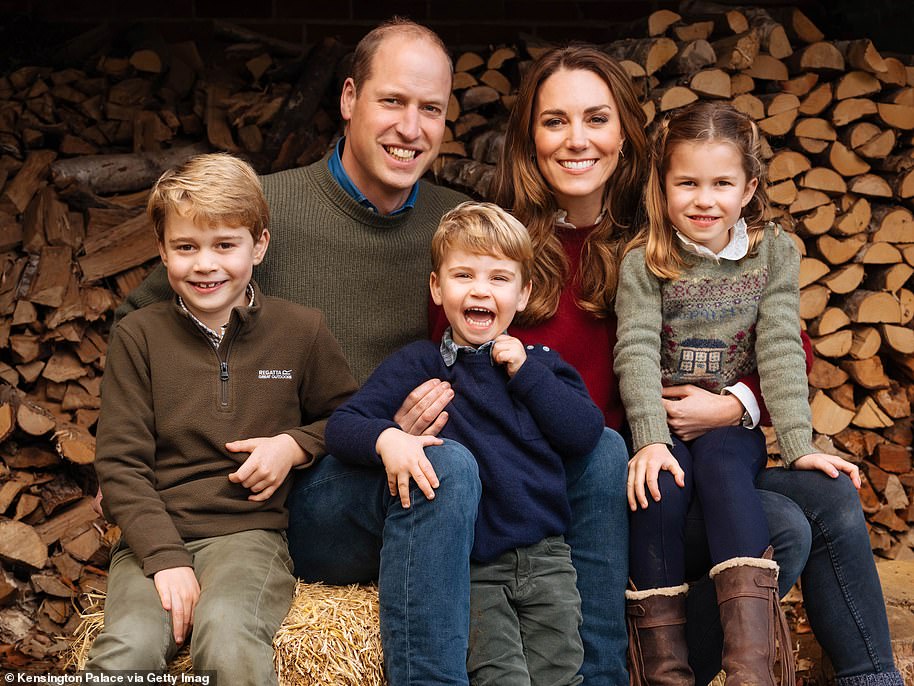 Intimate moments: Matt Porteous took this photograph of the Duke and Duchess of Cambridge with their children which was used for their 2020 Christmas card. The photograph was taken at the family’s private home of Anmer Hall, in Norfolk 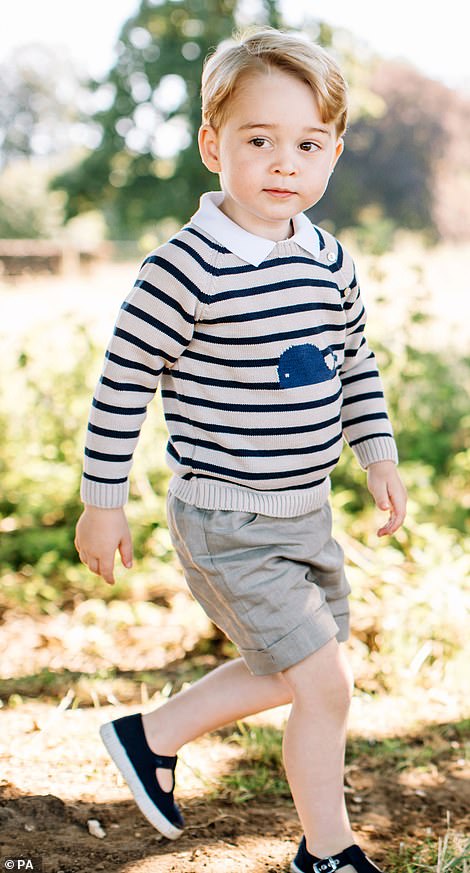 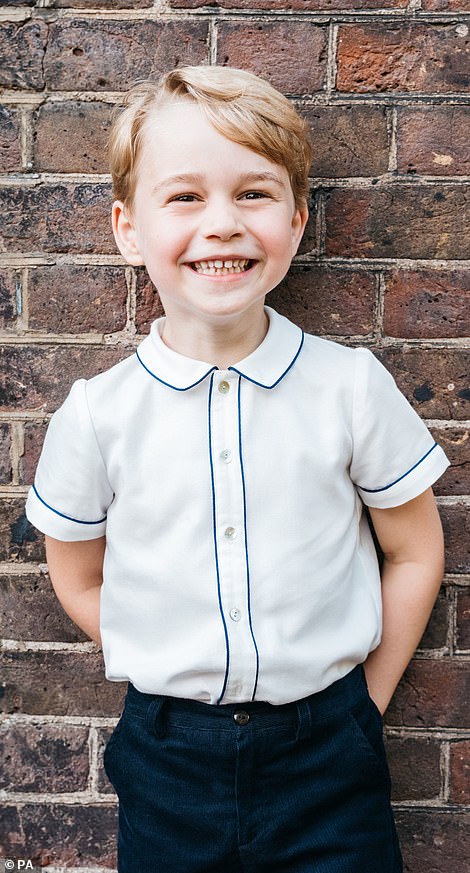 Birthday boy! Matt was also behind the lens for these photos taken to mark Prince George’s third (left) and fifth birthdays 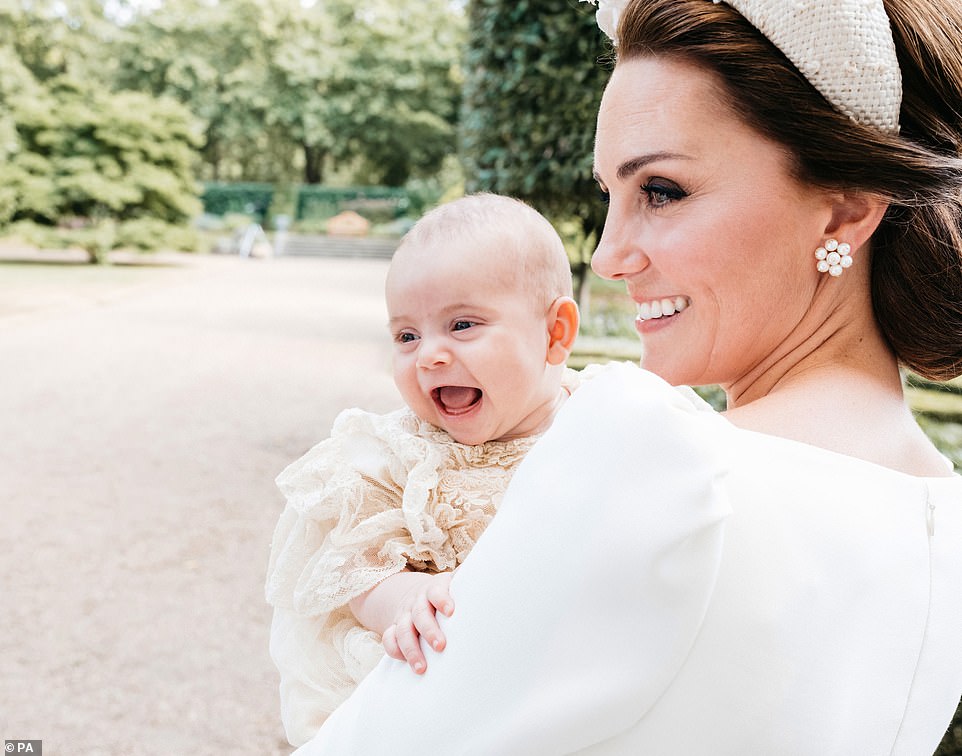 His photos of William, 39, Kate, 40, and their children George, eight, Charlotte, six, and Louis, three, have been used as official birthday portraits and selected for the Cambridge Christmas cards.

To capture these images, which are defined by their relaxed, candid feel, Matt has been invited to join the family at Anmer Hall, their private home in Norfolk.

Speaking on his process, Matt told Harper’s Bazaar: ‘I’m driven by a desire to document experiences—from the intimate to the adventurous.

‘The passion I have for my craft is driven by my personal work, the places I have visited, and the people I’ve formed genuine connections with. My ability to distil the sheer joy of marriage into art stems from innate intuition and real care for my clients, formed during the planning process and on the day.’ 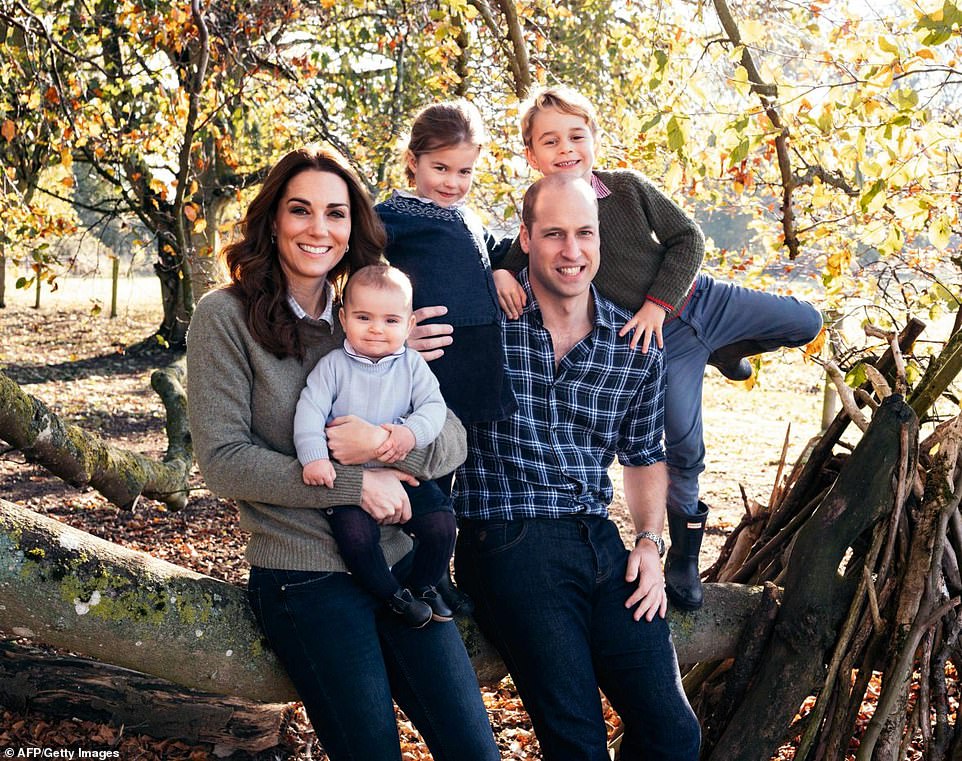 Family moments: Matt also took this photograph of the Cambridges in Anmer Hall, which was used for their 2018 Christmas card 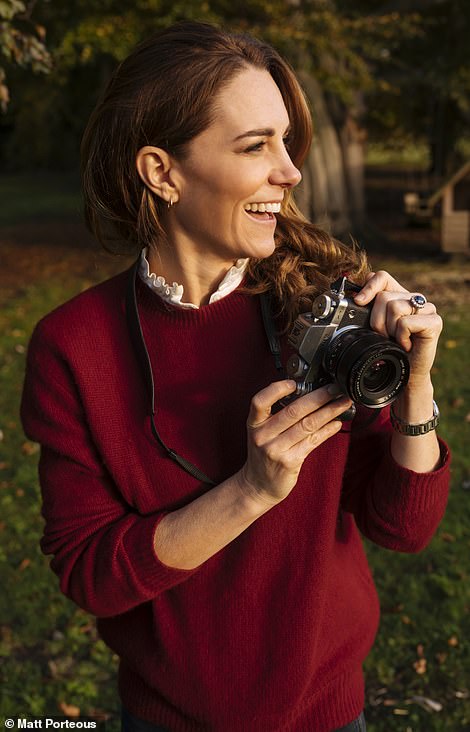 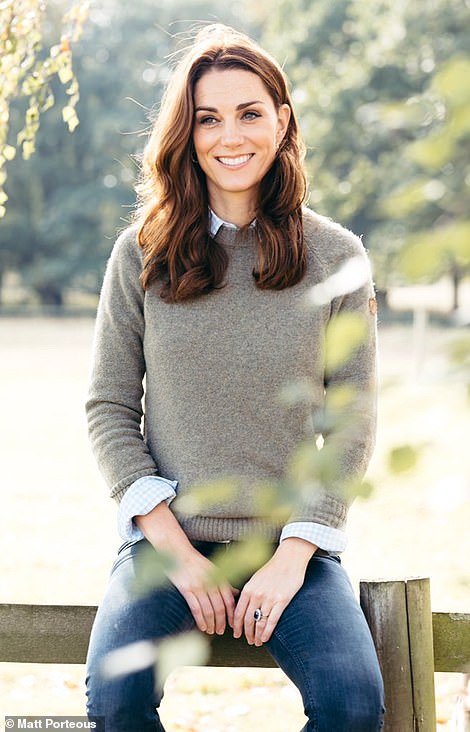 Capturing Kate: Matt took these photos of the Duchess of Cambridge, which were used to mark her Hold Still project (left) and mark her 38th birthday (right) 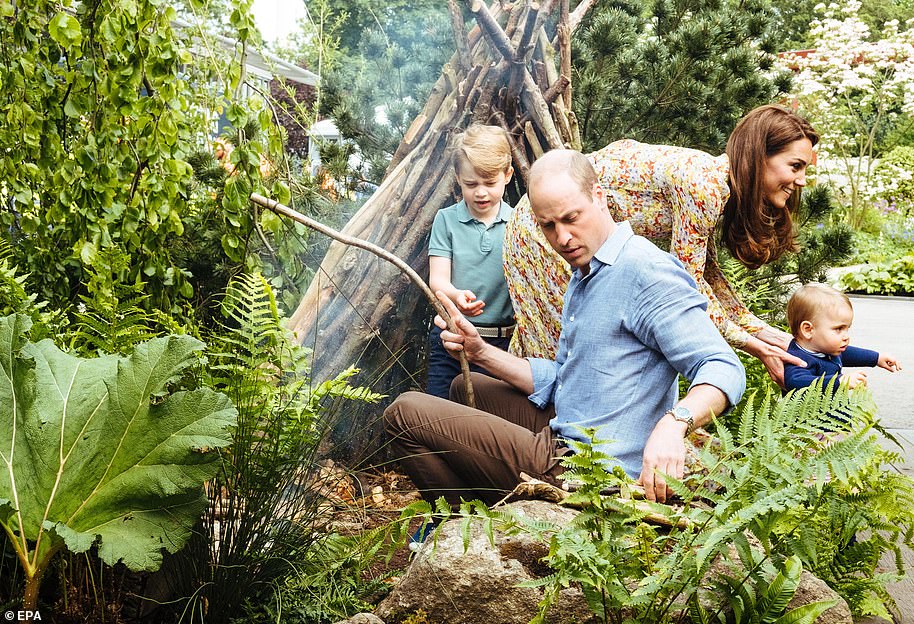 Playful: The photographer joined the family at the Duchess of Cambridge’s garden at the Royal Chelsea Flower Show in 2019 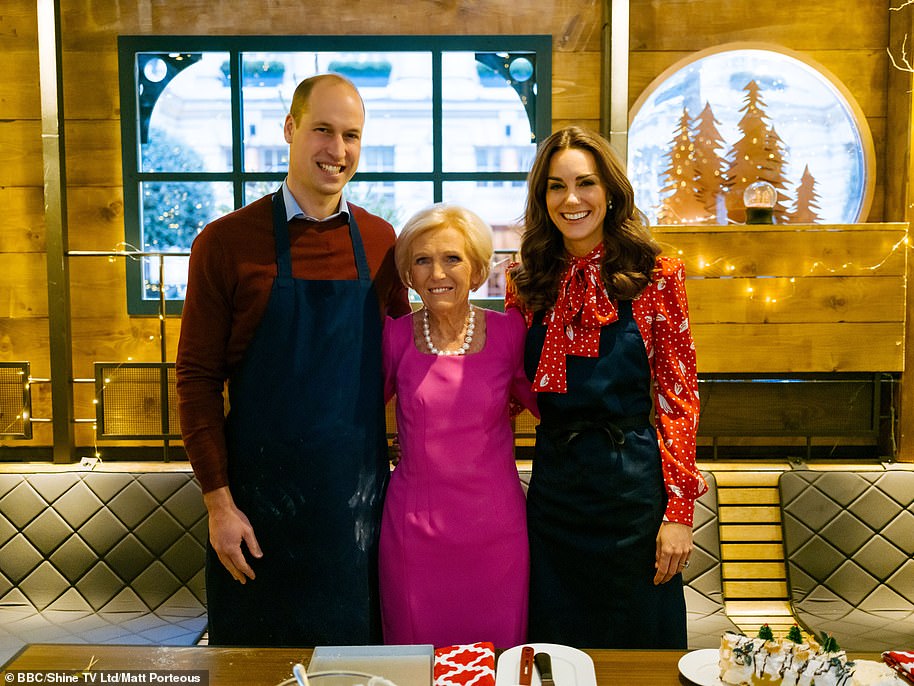 Festive feast! The Duke and Duchess of Cambridge with Mary Berry, in a photograph taken by private photographer Matt Porteous