By Josefa Velasquez, THE CITY

What started out as a lonesome, quixotic battle to unionize workers against online retail behemoth Amazon is getting a major boost from national progressive lawmakers.

US Sen. Bernie Sanders and Rep. Alexandria Ocasio-Cortez rallied around Amazon Labor Union members and warehouse workers on Staten Island as the union prepares for the start of a second vote on Monday at a distribution center known as LDJ5, where some 1,500 employees ready orders for delivery.

“What this struggle is about, it’s not just Amazon Staten Island. This is the struggle that is taking place all across this country. Working people are sick and tired of falling further and further behind while billionaires like [Amazon founder Jeff] Bezos becomes much richer, “Sanders told the crowd of more than 300 people gathered near the bus stop that’s become the nucleus for ALU’s drive.

The once-longshot organizers are hoping to replicate their success earlier this month when they pulled off a history-making upset at the JFK8 Amazon warehouse across the street from LDJ5, becoming the first Amazon union in the country.

Calling the rally “Solidarity Sunday,” Amazon Labor Union President Chris Smalls told THE CITY that presenting a unified front is “very important” for boosting worker morale ahead of the vote.

“You have to have politician support. We have to have the community supporting us and today was a good example and a good start to that leading up to the election that takes place tomorrow. So we could not have asked for anything better than to have Bernie and AOC show up today, “Smalls said, wearing a red, yellow and black bomber jacket embroidered with the words ‘Eat the Rich.’

The ALU’s demands remain the same at LDJ5: a $ 30 an hour minimum wage, better working conditions, including two paid 30-minute breaks and an hour-long paid lunch break, better medical leave, additional paid time off and eliminating productivity rates that require workers to pick a certain number of items per hour.

But organizing workers at LDJ5 comes with its own set of challenges, and Amazon has no plans on relenting against the union, having already filed objections to the first vote claiming that the National Labor Relations Board is giving the ALU preferential treatment.

Amazon did not immediately respond to a request for comment.

Amazon has been shutting down the LDJ5 facility for an hour each shift to pull workers into so-called captive audience meetings staged by management to discuss the pitfalls of unionizing, said Maddie Wesley, an LDJ5 worker since August 2021 and the treasurer of the ALU.

The mood inside the distribution center has been “very intense” in recent weeks, Wesley recalled to THE CITY, as she was about to begin her Sunday afternoon shift.

“It’s a smaller facility, so we thought that would actually make it easier. But what’s made it difficult is that rumors spread faster in a smaller facility, and so Amazon’s method of spreading lies and rumors has been somewhat effective because everyone kind of knows each other in the building, “Wesley said.

Among those rumors is that ALU leaders bought lavish cars with the money the union raised so far – almost $ 323,000 through GoFundMe, up from the roughly $ 100,000 they received prior to the first vote at JFK8.

Wesley said she heard rumors that she purchased a Mercedes Benz and that Smalls bought himself a Lamborghini.

“I got a little toy one from the dollar store,” Smalls joked.

Across the street at the JFK8 warehouse, management has been “grabbing people” and asking them to meet privately with Amazon lawyers and human resources to ask them about whether they were coerced to vote in favor of unionization, said Pasquale Cioffi, a process assistant at JFK8 and supporter of the ALU who has been working for the company for two years.

“They’re putting pressure on the workers,” said Cioffi, who’s known as “Uncle Pat” among workers and the union. “They’re grabbing people, they’re taking them to the office and they want to know if they were somehow threatened.”

The unionization drive was sparked by Smalls’ termination in the spring of 2020 for allegedly breaking safety guidelines after organizing a protest over what workers alleged were inadequate COVID protection measures.

In the months since, Smalls, his best friend Derrick Palmer, and other current and former Amazon workers have staked out a bus stop on the sprawling Staten Island campus, talking to workers about the benefits of joining a union as they go to-and- from their jobs. 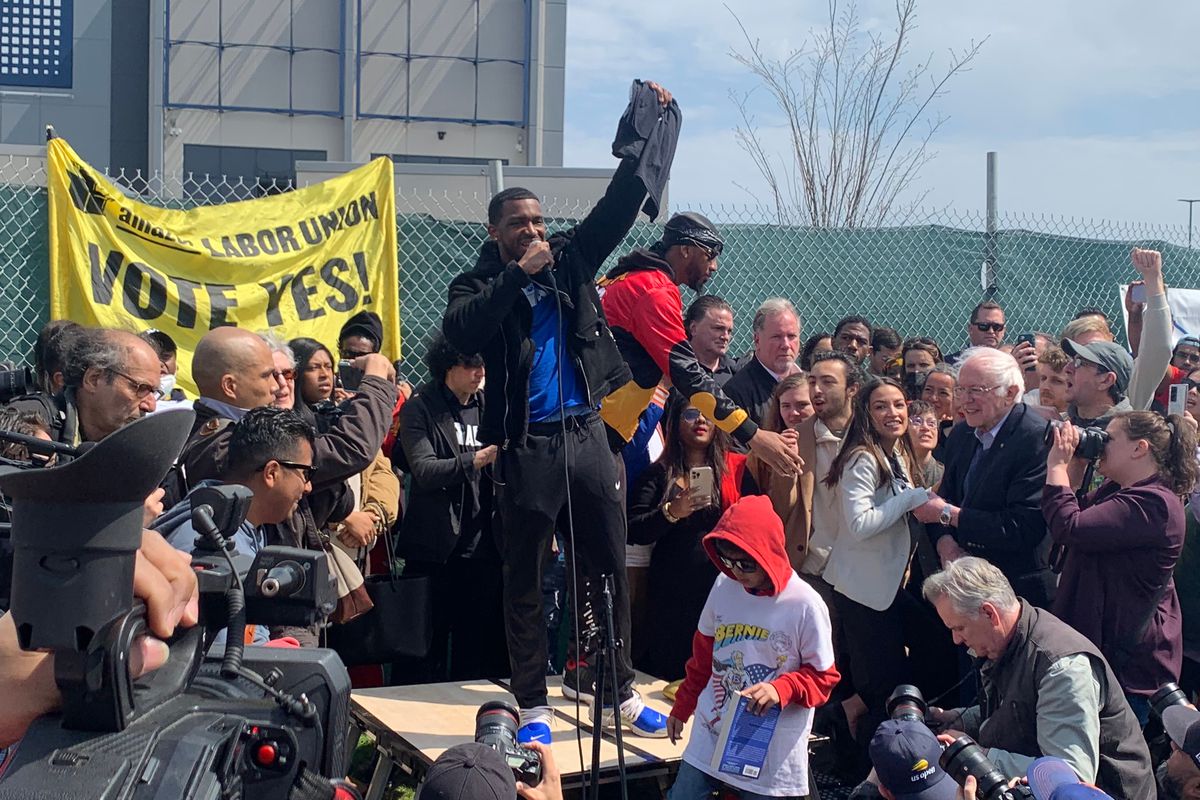 The ALU’s unconventional tactics – like hosting barbecues and events outside of the facilities and deploying a robust social media presence on Instagram and TikTok – have so far proved successful against the multi-billion dollar online retailer.

In the days leading up to the Monday vote, The Rolling Library, a mutual aid group, partnered with the ALU to offer free books and COVID tests to workers. Meanwhile, members of the union stationed themselves outside of LDJ5, setting up a table outside one of the warehouse’s entrances to distribute union literature, snacks and barbeque fixings.

Within the distribution center, a 975,000 square foot facility opened in the fall of 2020, Amazon has ratcheted up its union-busting effort, deploying the same anti-union literature, posters and TV images it did at the warehouse across the street, workers said .

According to Smalls, Amazon is “doubling down, tripling down on union busting.”

“It’s easier for them to isolate workers, so it’s a challenge. It’s definitely a challenge for organizing and they’re demonizing them and we have to withstand the onslaught of that as well. But I think the momentum is with the workers,” Smalls said.

The organizing effort secured a key win earlier this week when an administrative judge ordered that Amazon would have to reinstate and pay lost wages to Gerald Bryson, a JFK8 worker who helped lead the protest over working conditions at the warehouse. Bryson was fired by the company after staging another demonstration and getting into an argument with a coworker.

The vote count for LDJ5 is slated to begin on May 2. In the meantime, the ALU is asking Amazon to recognize the union and begin negotiating a contract, which the ALU leadership considers the “real fight.”

“First and foremost, Jeff Bezos, Amazon, everybody, we got to recognize the fact that they did this thing and won a union election fair and square right here in New York City,” said Ocasio-Cortez. “And now what we need to do next is make sure we support them.”

“All of us as a city need to remember that New York City is a union town. Here in New York, you gotta treat our people right. If you can go to space, you can give our people a bathroom break,” she added , referring to Bezos’ “astronaut” tourism.

Propelled into the spotlight, Smalls has been a fixture on cable shows and late night TV in the weeks since the historic win – appearing on Tucker Carlson’s FOX News show and the Daily Show with Trevor Noah.

Media interest has also blossomed with dozens of cameras and reporters from major news outlets swarming to cover the ALU’s Sunday event, a far bigger crowd than at their press conference two weeks ago.

“We expected that after the win. We did not know it would be that rapid. This is about how we balance and stay grounded and stay true to what the ALU represents and do not get distracted by the outside,” said Smalls.

“It’s been a whirlwind of things. I’m just trying to balance things as best as possible,” he said.

THE CITY is an independent, nonprofit news organization dedicated to hard-hitting reporting that serves the people of New York.