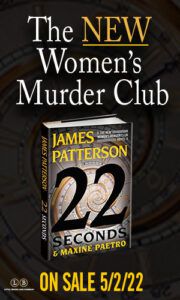 Today’s edition of Daily Deals is sponsored by 22 Seconds by James Patterson.

$2.99
The Unexpected Inheritance of Inspector Chopra by Vaseem Khan

$2.99
Tender Is the Flesh by Agustina Bazterrica

$2.99
The Lost and Found Bookshop by Susan Wiggs

$1.99
The Queen of the Tearling by Erika Johansen

$1.99
Against the Loveless World by Susan Abulhawa

$1.99
The Black Flamingo by Dean Atta

Dreyer’s English by Benjamin Dreyer for $2.99

Gearbreakers by Zoe Hana Mikuta for $2.99

A Curious Beginning by Deanna Raybourn for $2.99

The Sirens of Mars by Sarah Stewart Johnson for $2.99

From Here to Eternity by Caitlin Doughty for $1.99

As Long As Grass Grows by Dina Gilio-Whitaker for $2.99

Rosaline Palmer Takes the Cake by Alexis Hall for $2.99

City of Light, City of Poison by Holly Tucker for $1.99

The Beekeeper of Aleppo by Christy Lefteri for $2.99

Orhan’s Inheritance by Aline Ohanesian for $1.99

The Girl with the Louding Voice by Abi Daré for $1.99

Neuromancer by William Gibson for $1.99

The Sisters of the Winter Wood by Rena Rossner for $4.99

Practical Magic by Alice Hoffman for $2.99

Rabbit Cake by Annie Hartnett for $1.99

My Monticello by Jocelyn Nicole Johnson for $2.99

A Beautiful Poison by Lydia Kang for $0.99