THE blood-soaked hockey bag allegedly used by Orsolya Gaal’s handyman lover to dump her butchered body at the side of the road has been revealed in chilling photos obtained by The US Sun.

David Bonola, 44, is accused of slashing Gaal’s throat and then stabbing her nearly 60 times during a frenzied attack in the basement of her Queens, New York, home last Saturday.

After carrying out the vicious killing Bonola, who police say has confessed to the crime, then retrieved a hockey bag belonging to one of her sons and stuffed Gaal’s body inside.

He wheeled the large black Bauer bag down the street for half a mile before discarding it near Forest Park sometime around 4.30am.

Glenn Van Nostrand, 51, was out walking his two Rhodesian Ridgebacks in the area a few hours later when he spotted the bag resting on a sidewalk near the Jackie Robinson Parkway.

Nostrand told The US Sun that it is not uncommon to see trash and other items discarded along the busy roadside, but something about the bag grabbed his attention – and piqued his curiosity. 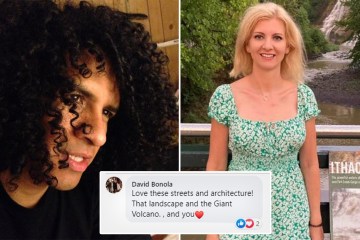 “I was walking and about 100 yards ahead of me, I could see this large bag that was half on the sidewalk, half on a patch of grass and dirt that was next to a chain-link fence,” he said.

“And there was something about it that did not sit right with me … I was really noticing there’s something not normal that I’m seeing here.”

Nostrand continued to walk toward the sports bag. The Queens native said his dogs became more animated and heightened as he approached, almost pulling him towards it.

But Nostrand, who suffers from poor vision in his left eye, said it was not until he was standing over the bag that he noticed something truly troubling: a pool of blood leaking from the bottom.

He decided to nudge the bag with the side of his leg and he felt something heavy.

At first, Nostrand thought a large dog or another big animal might be inside. He said he’s previously seen all kinds of “crazy s ** t” in and around Forest Park, including a severed pig’s head he’d happened upon weeks earlier.

“I decided to open the bag,” Nostrand said. “I’m right-handed so I used my right hand to pull the zipper down and I just saw this pair of bare feet, pale bare feet, and I just thought ‘oh my gosh.'”

Nostrand unzipped the bag a little further. He saw black ankle-length skinny jeans, a belt, and the top of a woman’s waist.

The body, he said, was in the fetal position and had been placed in the bag head-first.

He poked the body with two fingers and, after realizing it was cold to the touch, immediately stepped back and dialed 911. Dispatchers received the call at 8.02am.

While he waited for the police to arrive, Nostrand snapped a few pictures of the bag.

“That’s when it all really hit me emotionally,” he said. “I could feel this unsettling feeling rising up through my throat and I felt quite choked up.

“By this point, my dogs were going crazy,” he added. “I honestly thought the body was of a teenage girl because it seemed so small.

“But I was on the phone to the operator who kept asking me in a number of different ways whether the person was still alive. I kept telling her no, can you just bring someone down here.”

Nostrand waited for police to arrive and watched as an officer unzipped the bag, reportedly exclaiming “Woah!” as he peered inside.

A flurry of emergency service vehicles, including firetrucks and EMTs, soon arrived on the scene. Apparently noticing Nostrand was in a state of shock, one official walked over to him, asking if he needed to talk to someone about the horrors he’d just witnessed but he assured the official that he was fine.

After answering dozens of questions from various detectives – some of whom gave him a “hard time”, he said – Nostrand walked back towards his home with his dogs.

As he left the site of his shocking early-morning discovery, he noticed something else strange beneath the Robinson Overpass: a “purplish” patch on the ground he recognized to be blood.

Hailing over a group of detectives, Nostrand and the officers found a number of other streaks of dark red spread out across Metropolitan Avenue.

The trail, police would discover, extended more than half a mile, leading them all the way back to a $ 2million Tudor-style home on Juno Street where 51-year-old Orsolya Gaal lived with her husband and two teen sons.

A knock on the door would yield no sign of Gaal. Her confused 13-year-old son answered, telling investigators his dad and older brother were out of town and he “did not know” where his mom was.

An emergency search of the home would uncover blood on the first floor and even more in the basement.

Also recovered was a bloodied knife, believed to be from the family’s kitchen, and on the fridge, investigators found a curious note which read “GET A NEW HANDYMAN.”

The medical examiner would ultimately identify the woman in the bag to be Gaal, determining she’d been stabbed a staggering 58 times in a brutal attack police would later describe as “ruthless.”

The day before, Gaal had been out watching a show at the Lincoln Center, in Manhattan, before being spotted drinking alone at a bar close to her home in Queens until 12.30am.

Witnesses told police she appeared to be waiting for someone but that someone never showed up.

That would prove to be the last time she was seen alive. Several hours later, her killer was seen wheeling her body away from her home at 4.30am, where it was found by Nostrand later the same morning.

The apparent truth of what happened to Gaal would not be realized for almost another five days until David Bonola, the married mother’s secret boyfriend of two years, was taken into custody at NYPD’s 112th Precinct on Wednesday night.

During interrogation, police say Bonola made several “incriminating statements” before allegedly confessing to the crime.

According to police, Bonola admitted he’d been in an “off again, on again” relationship with Gaal for the last two years, but the extra-marital tryst had recently come to an end.

He told them he’d seen texts Gaal had exchanged with another man and went over to her home to discuss their relationship just after midnight on Saturday.

The pair quickly started arguing, and Gaal took the conversation down to the basement for fear of waking up her son who was sleeping upstairs.

Their argument continued to escalate, and Bonola allegedly casually described to cops how, in a fit of rage, he grabbed a knife and slashed Gaal’s throat, stabbing her over and over again across the left side of her body.

The handyman, who worked as Gaal’s family’s heating and air conditioning repairman, then fetched her son’s hockey bag and stuffed her corpse inside.

He waited until 4.30am, and then wheeled the bag towards Forest Park, reportedly not wanting to leave her body in the basement for her son to find.

He then sought treatment for wounds to his hands at a local CityMD sometime after 6am, police say.

The horrific discovery of Gaal’s body would ultimately be left for Nostrand to make.

The Forest Hills resident, who works a number of odd jobs, said he was disturbed when he learned of the brutal way in which Gaal had been killed.

He did not know the mom-of-two personally but remembered seeing her around Forest Park in the past.

“I mean, it’s such a sad story because I’m thinking from the kid’s point of view and how terrible it is that this woman had to endure this,” Nostrand said.

“I know people on the block where her family lives and I’ve seen her at the dog park.

“I can not ever say I’ve spoken to her, certainly nothing more than a ‘hello’, but she was far from the worst-looking person in the world, and when you carry yourself a certain way and you have a good energy about you, you remember those people. “

From a personal standpoint, Nostrand said he is thankful he chose to unzip the bag on the right-hand side because he believes it spared him from witnessing the worst of the “gore.”

“Otherwise, I know that picture would not be able to leave my mind,” he said.

“I’m not a super visual person, but I know that that would be a visual that would have been a real problem for me to have

“A little bit of blood does not bother me too much, but this is a whole different situation.”

Nostrand added: “I make it as a joke, though it’s not meant to be funny, but I’ve never been so happy to be [right-handed]. “

Bonola appeared in court on Thursday night to be arraigned on charges of second-degree murder, criminal tampering, and criminal possession of a weapon.

The 44-year-old remained completely silent throughout the hearing. Hours earlier he had been far less restrained, having been recorded telling a journalist to “go f ** k” themselves as he was led out of the 112th precinct in cuffs.

Prosecutors told the judge that Gaal had let Bonola into the home because she knew him.

“He then engaged her in a verbal dispute and unfortunately she had to ask him to leave multiple times,” they claimed.

“[But Bonola] refused to leave and the incident [escalated] with the unfortunate stabbing of the victim over 50 times. “

Judge Anthony Battisti ordered Bonola to be held without bond, citing his apparent confession to the killing.

“The accused lays out in detail what happened, how it happened and what he did following the events given rise to this case,” Battisti said.

It’s currently unclear when Bonola is due back in court.

The Mexican national entered the US 21 years ago. He was living in the country illegally at the time of his arrest, according to the NY Post.

Gaal’s family has not spoken publicly since his arrest. Several attempts by The US Sun to reach them have been unsuccessful.