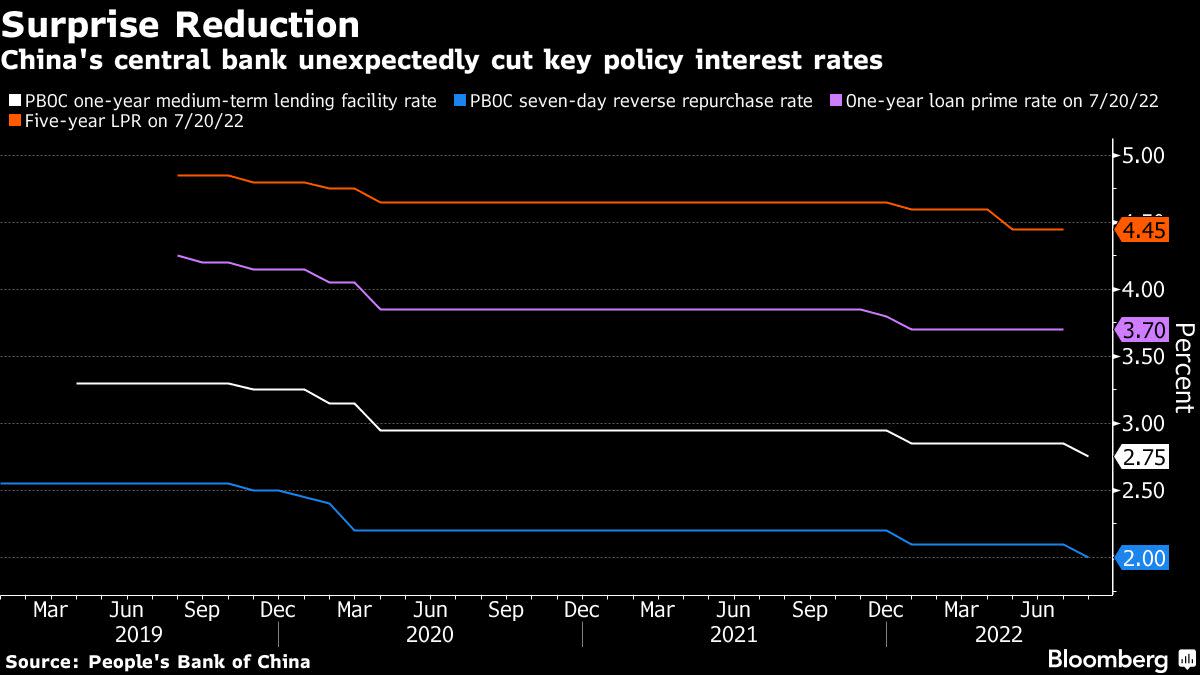 China’s central bank unexpectedly cut its key interest rates as it ramps up support for an economy weighed by Covid lockdowns and a deepening property downturn.

The rate cut came just before data showing home prices fell again in July, while industrial output and retail sales were weaker than expected, illustrating the breadth of the slowdown. The problems facing the economy have continued into August, with some homebuyers still refusing to pay mortgages on unfinished homes and Covid cases spiking as outbreaks and lockdowns spread across the country.

The People’s Bank of China lowered the rate on its one-year policy loans by 10 basis points to 2.75% and the seven-day reverse repo rate to 2% from 2.1%. Economists had expected the one-year medium-term lending facility would be left unchanged.

That may prompt banks to cut their prime lending rates for August when they’re announced next week, but it’s unclear how much further rate reductions will be able to stimulate demand. The policy rate and lending rates are all at record lows already. But demand for loans slumped in July, with the total increase in new credit the slowest since at least 2017 as companies and households pulled back on borrowing.

The housing market slump continued, with investment falling 6.4% in the first seven months of the year and sales dropping 31.4% for the same period. That flowed through to demand for industrial goods, with cement output falling 7% in July and crude steel down 6.4%. Output of computers and mobiles phones was also down last month.

“The sharp downside surprise in China’s July activity shows the economy lost momentum after only a brief reopening-driven rebound in June.”

“The most surprising development was a slowdown in investment — suggesting a heavier-than-expected drag from the property market turmoil. Coming after extremely weak credit for July, the figures support the People’s Bank of China’s decision to cut rates — and we don’t think the central bank is done yet.”

The nation’s commitment to Covid Zero has made it tough to sustain any hard-won economic progress, as the threat of repeated restrictions and re-openings continues to loom. August saw a surge in cases on the resort island of Hainan, where authorities have locked down holidaymakers, suspended flights and shut businesses to contain infections.

Restaurant sales dropped for a fifth month, showing the hit that the services industry has taken from the lockdowns and restrictions around the nation.

While the rate cut was small, “it’s more of a signaling effect” showing authorities are prepared to act, said Zhang Zhiwei, chief economist at Pinpoint Asset Management Ltd. “In terms of the size of this action, it’s quite limited. In order to turn around the market expectation and break the downward spiral, they need to do a lot more.”

The central bank at the same time withdrew liquidity from the banking system by issuing 400 billion yuan ($59.2 billion) of MLF funds, only partially rolling over the 600 billion yuan of loans maturing this week. That was in line with economists’ forecasts, and helps drain some excessive liquidity sloshing in the interbank market.

The cut widens the divergence between the PBOC’s easing stance and other major central banks that are tightening monetary policy to curb soaring inflation. That’s raising risks for the yuan as capital outflow pressures increase.

It also comes a surprise as the PBOC recently warned against the risk of rising inflation, even though domestic demand still remains soft, keeping overall price pressures in check for now.

The rate reduction underscores the severity of growth challenges. China’s top leaders vowed last month to achieve “the best outcome” possible for economic growth this year while sticking to a strict Covid Zero policy, and downplayed the official target of around 5.5% growth. Economists polled by Bloomberg forecast the economy to expand only 3.8% this year. 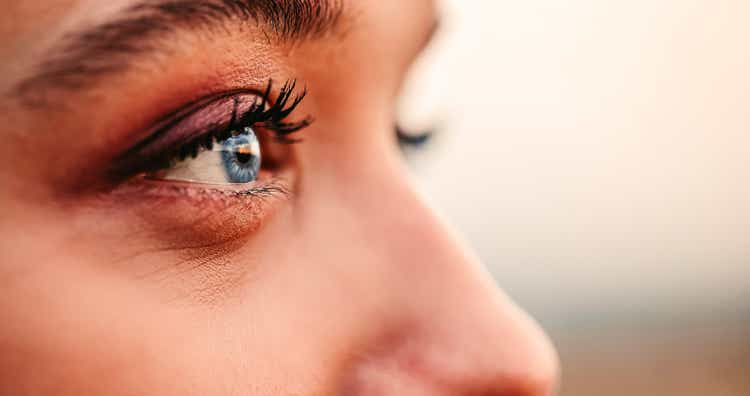 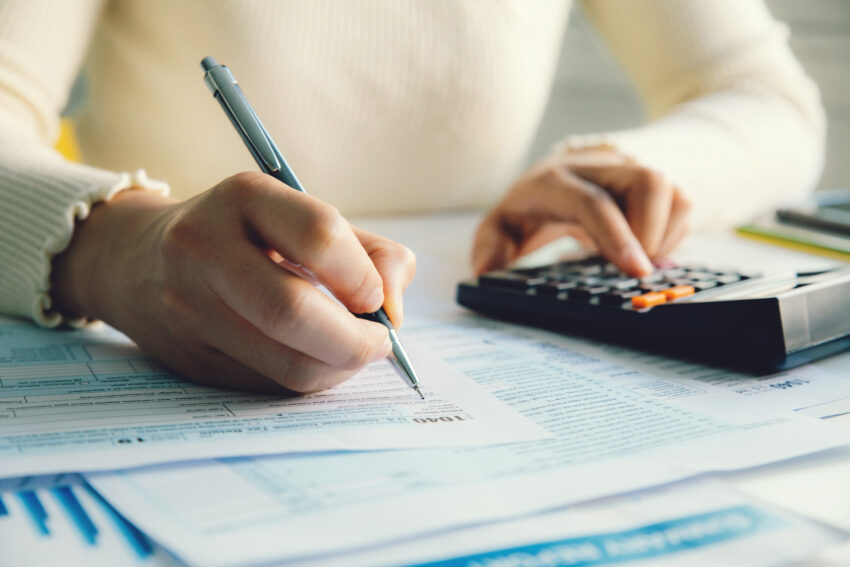 HMRC handed out 80 per cent more penalties for careless errors made by taxpayers in their tax returns last year,{...} 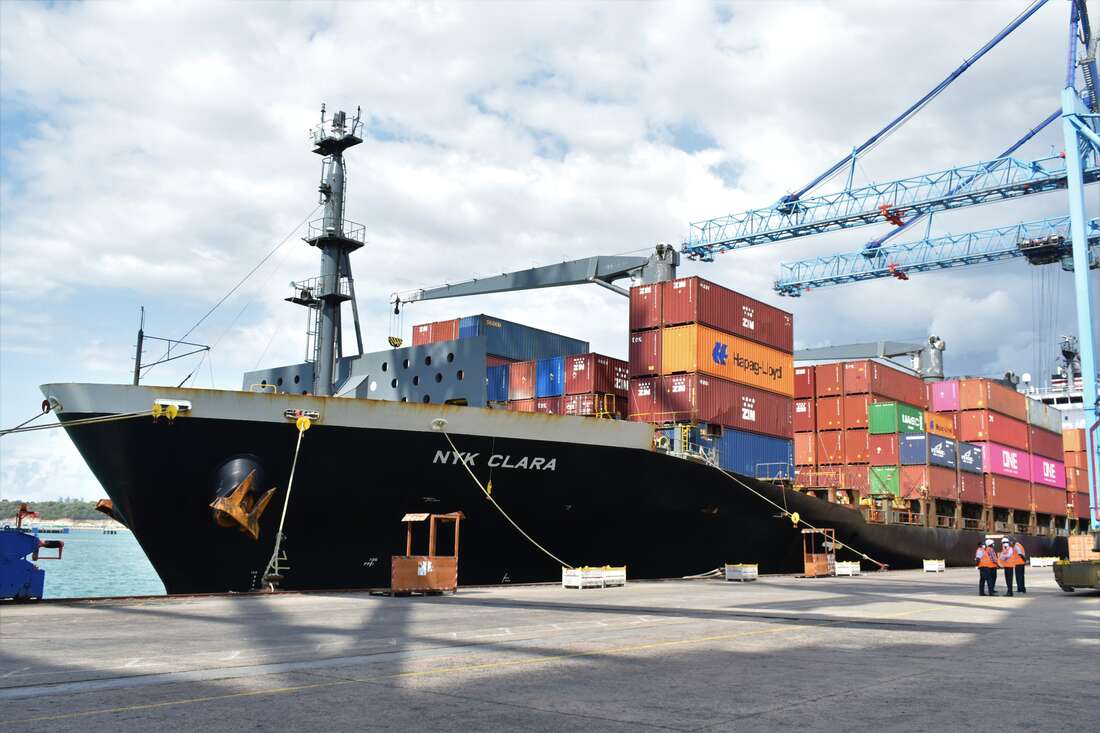