In writing Ulysses, the modernist odyssey shaped around a single day in 1904 Dublin, James Joyce painted the city so vividly that he created a literary trail through its thoroughfares, public houses, bridges and beaches – one that devotees have enjoyed tracing ever since the novel’s publication in 1922. The blue-fronted antiquarian bookshop found “on the sunny side” of historic Duke Street didn’t exist back then, but it’s certainly on Joyceans’ map of must-sees today – especially in this, the work’s centenary year.

Ulysses Rare Books was established here, rather cannily, by retired Donegal schoolteacher Enda Cunningham in 1988. The shop is mere steps from Davy Byrne’s pub where the fictional Leopold Bloom orders his gorgonzola sandwich and glass of burgundy – the faithful will muster here next week in period attire for their traditional 16 June “Bloomsday” walk, which marks the day depicted in the story – and from The Duke, the inn frequented in real life by Joyce and George Bernard Shaw.

Recognisable by its imposing sky-blue awning, it is dotted inside with busts of the nation’s bards, a thank-you letter from Bill Clinton’s White House and the odd cartoon satirising the quintessential antiquarian bookseller. As for the stock, David and Aisling Cunningham, who took over the running of their late father’s business, have built on their father’s reputation for sourcing “the rarest and scarcest” in Irish 20th-century literature: spine-tinglingly special first or limited editions, signed or unusual imprints of Joyce, Wilde and Yeats.

“When we were young, it was just his hobby,” David explains of his father. “He loved Irish literature and local history and he started his own catalogue, Cathach books, in 1969, just to earn enough to buy more books.” When he retired from teaching, he started a small shop in Dublin’s George’s Street Arcade before settling here a couple of years later.

While the main thread is still Irish literature, poetry and history – the shelves hum with Beckett and Stoker, Heaney and Harry Clarke’s illustrations – in recent years they have opened a new chapter with an enchanting nook of collectable children’s books, mythology and maps.

The shop consistently attracts international collectors and academic institutions, film producers seeking the perfect period prop, gift-hunters, curious tourists, celebrated locals and international household names. Brad Pitt has stopped by; as has Julia Roberts, “who stayed in character, with her Irish accent, when she was filming Michael Collins”; Daniel Day-Lewis – (“I think he was into fishing”) – and the late Anthony Bourdain, who bought a first edition of Joyce’s The Cat and the Devil for his daughter.

These days you could easily be browsing beside fashion designer Simone Rocha, a certain Peaky Blinder, a musician leafing through Van Morrison lyrics or a regular on the trail of an obscure political pamphlet.

Not everyone’s seeking literary blasts from the past. Film and television adaptations have brought surges of interest in signed first editions of contemporary Irish blockbusters, too – from Roddy Doyle’s The Commitments to Colm Tóibin’s Brooklyn, and let’s not forget “the Paul Mescal effect”, which saw a flurry of Normal People requests.

Even for the owners, there’s still room for thrills… and chills. “I’ll never forget a customer asking to look at a Book of Kells [the illuminated gospel] priced at £75,” says Aisling. “This was in the ’90s. I hadn’t catalogued it, so I was leafing through it while he looked around, and I froze; I recognised the signature. It was dedicated by James Joyce to Michael Healy, Nora [Joyce’s wife]’s uncle, and none of us had spotted it. It was worth about £3,500. Thank god he didn’t go for it, because I wouldn’t have known what to do!” It eventually sold for its rightful price, and some years later turned up in a bookseller’s catalogue, by then worth £15,000. 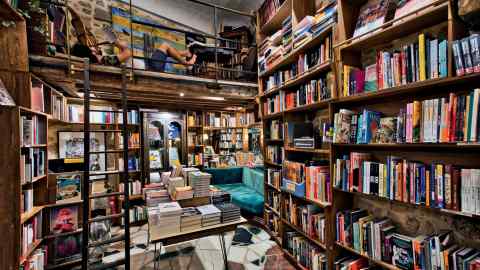 To mark Ulysses’ centenary, the shop self-published a cork-bound imprint that sold out within 24 hours. But more Joycean treasures abound – including a second edition published by John Rodker in 1922 (it was famously first published by Shakespeare & Company in Paris), which will have pride of place on Bloomsday.

The masterpiece, love it or loathe it, has – as the Trinity College hosts of the symposium taking place this month in Dublin put it – “kept the professors busy for a full century”. And a rare bookshop that took its name, too.