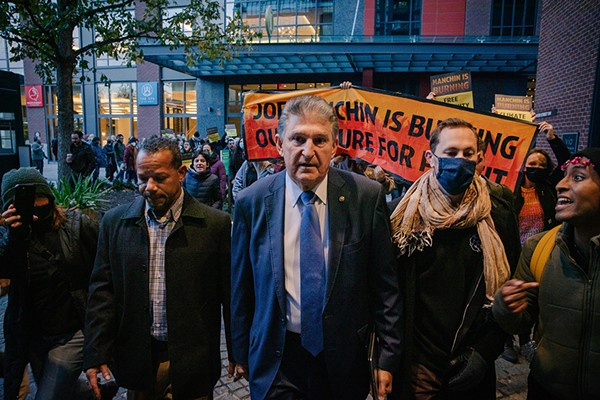 Did the Democrats actually accomplish something? | Informed Dissent | Detroit

Sen. Joe Manchin confronted by climate activists in 2021. Perhaps they left an impression on him.

Let’s not get ahead of ourselves. There are still plenty of ways for Democrats to screw this up — and Democrats being Democrats, the odds they’ll find one are not small. In any event, Kyrsten Sinema’s corporate owners have yet to render their verdict.

But for now, it looks like Chuck Schumer learned how to do politics like a Republican. For once, Mitch McConnell got played for a sucker.

On Wednesday, the Senate approved a bipartisan bill to invest $52 billion into the U.S. semiconductor industry, an effort to keep pace with China. The bill had long been delayed by the Democrats’ failure to get their shit together. (Shocking, I know.)

More recently, McConnell threatened to torpedo the legislation, a White House priority — though it had significant support from his caucus — if Senate Dems resurrected a “partisan reconciliation bill” that capped the price of some medications, taxed rich people, and funded health care and climate change programs.

But he appeared to have nothing to worry about. Two weeks ago, for what seemed like the 43rd time in the last year, talks between Schumer and Democratic Sen. Joe Manchin blew up. Manchin — who never misses a chance to thwart liberals for pundit applause — said he’d no longer support climate action because something-something inflation.

So McConnell and company, calling the semiconductor bill a “national security” issue, graciously allowed the limping Biden administration to notch a much-needed win.

And Schumer and Manchin promptly announced that they reached a deal for a partisan reconciliation bill that would cap the price of some medications while taxing rich people and funding health care and climate change programs.

Senate Republicans were pissed. So pissed, in fact, that they filibustered legislation to expand medical care for veterans who were exposed to toxic burn pits.

There are few more obvious political own-goals than voting against sick vets. (A bill mandating puppy torture?) But Senate Republicans compounded their self-immolation by opposing legislation they’d supported a month earlier — barely feigning an explanation for their change of heart.

And because they’re bent out of shape, Sen. Susan Collins says they might filibuster legislation to codify same-sex marriage, too.

To recap, then: Because Senate Democrats out-maneuvered them to (maybe!) raise taxes on the wealthy (supported by 67% of Americans), expand health insurance subsidies (67% support), cap prescription prices (88% support), and fund clean energy programs (59% to 89% support, depending on the program), Republicans gave dying veterans the finger and might oppose marriages backed by 71% of Americans.

Schumer — either a genius or the luckiest bastard on the planet — couldn’t have engineered a better trap. And he couldn’t have picked a better time to spring it. Since the Supreme Court’s reactionaries overturned the right to abortion, Democrats have been gaining in polls, sparking murmurs that maybe, just maybe, 2022 won’t be a retread of 2010 after all.

And now, Democrats can deliver an elusive progressive victory — repeat after me: “the largest climate investment in the country’s history” — while Republicans get revenge by making themselves less popular than the plague. (The video of Sen. Ted Cruz fist-bumping his colleagues after killing the burn-pit bill is basically an in-kind donation to the Democratic National Committee.)

Democrats can deliver an elusive progressive victory — the largest climate investment in the country’s history — while Republicans make themselves less popular than the plague.

Before everyone pops the Champagne, let’s remember that The Inflation Reduction Act of 2022 — the title is a masterpiece of agitprop, considering the bill will likely have little effect on inflation — is a watered-down version of the watered-down version of President Joe Biden’s domestic agenda, which initially clocked in north of $3 trillion.

The infrastructure piece was split off winnowed down into a bipartisan bill that spent $550 billion in new revenue on transportation, broadband, and utilities upgrades. The $1.7 trillion Biden wanted to invest in climate change, health care, and social programs has been killed, revived, shrunk, killed, and revived several times over the last year, until we ended up with the IRA.

That spending number is, of course, a fourth of Biden’s original pitch. It’s also $1 trillion less than the deal Manchin and Schumer agreed to a year ago, when Manchin was fretting about people snorting their child tax credits. And the climate investment is almost $200 billion less than earlier iterations of the reconciliation package envisioned.

But it’s something. And for a struggling White House, something is better than nothing.

The bill promises to cut U.S. carbon emissions 40% by 2030 — Biden previously pledged to cut emissions by half by the decade’s end — largely through incentives to increase the use of electric vehicles and solar panels. But as Manchin explained, the legislation will not remove “dependable and affordable fossil fuel energy before new technologies are ready to reliably carry the load.”

Which is to say, we’re in no hurry to get rid of oil or coal or natural gas. Hope you like heatwaves!

Noticeably absent from the bill is the Clean Electricity Performance Program, which would have slashed carbon emissions by penalizing energy companies that failed to meet targets. Instead, Manchin’s legislation will require the government to permit new oil and gas leases in the Gulf of Mexico and off the coast of Alaska. Democratic leaders also promised to make it easier for developers to build pipelines and other energy infrastructure without interference from pesky environmentalists.

So while this would be the most significant climate investment in U.S. history, that’s less a cause for celebration than a comment on decades of denial and apathy. A burning planet will require more.

For now, though, Democrats can take the W. Assuming Kyrsten Sinema lets them. 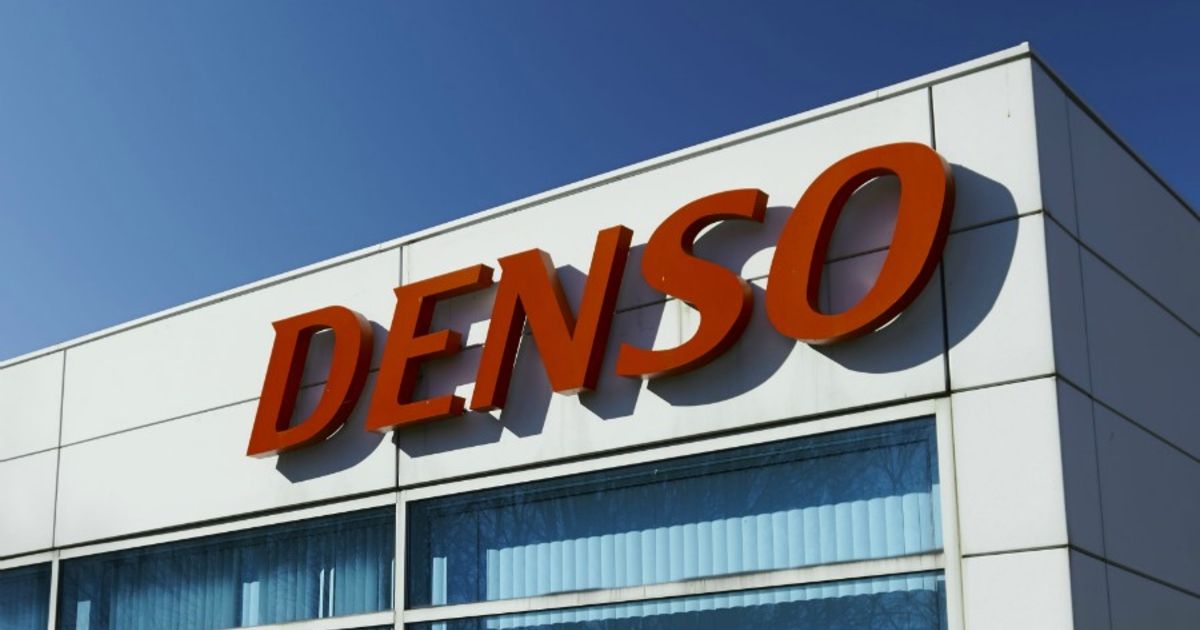 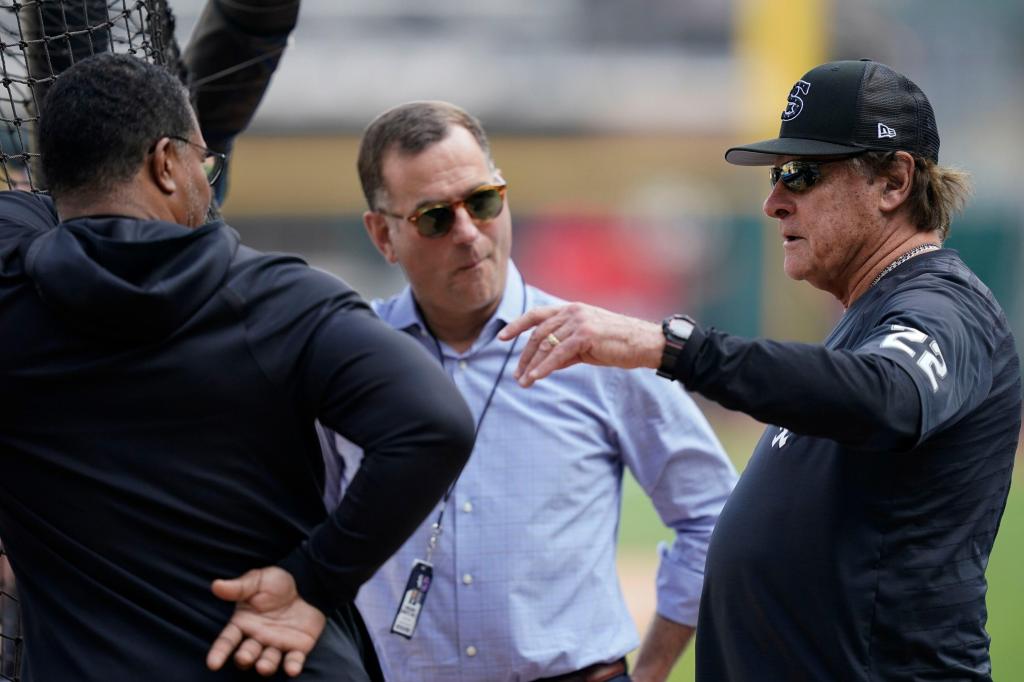 The man who fired Tony La Russa was in the Chicago White Sox clubhouse Sunday morning, two days after the{...}