Orsolya Gaal, 51 (pictured) was slain in her Forest Hills home late on Saturday night. Her family’s handyman said the house was outfitted with security cameras and had a separate entrance to the basement

The Queens home of Orsolya Gaal, where the mother-of-two was apparently stabbed to death and dismembered, was laden with security cameras and had a separate entrance to the basement, according to her family’s electrician.

The revelation comes as sources alleged that police were seeking the woman’s handyman ex-lover, who ‘knew his way around’ Gaal’s Forest Hill house.

Three days after the 51-year-old mother’s corps was recovered in a bloodied duffel bag less than a mile away, at least one unmarked police vehicle and an NYPD van were stationed outside the house on Juno Street.

Gaal died there on Saturday morning around 12.40 am after attending a concert at the Lincoln Center on Friday night and going to a bar near her home for about 40 minutes.

She was stabbed 58 times in the neck, torso and arm, and had defensive wounds on her palms and fingers.

There were no signs of forced entry to the residence, authorities said.

On the family’s block, at least seven neighbors’ doors are equipped with doorbell cameras, according to FOX News.

Jack says he was often at home carrying out electrical work, power-washing and painting.

He added that the house has a separate door that leads up into the kitchen or down into the basement, which is outfitted with a laundry room and what used to be the boys’ playroom. 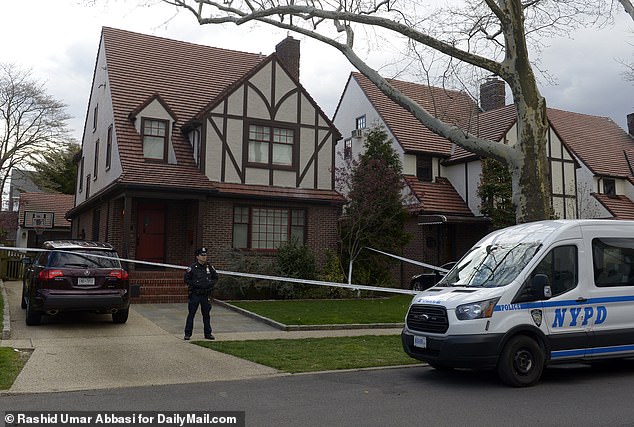 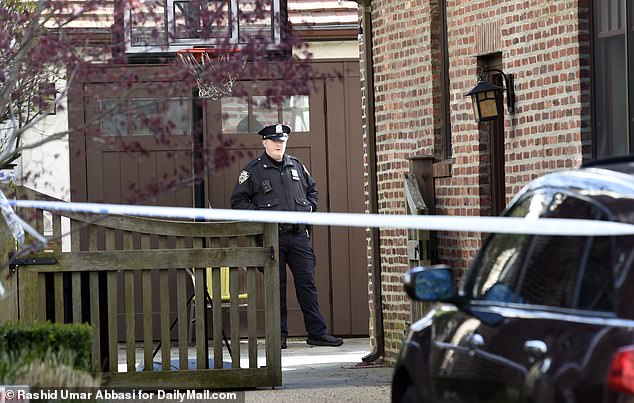 At least one unmarked police car and an NYPD van were stationed outside the Tudor-style, $ 2.2 million dollar home where was killed early Saturday morning 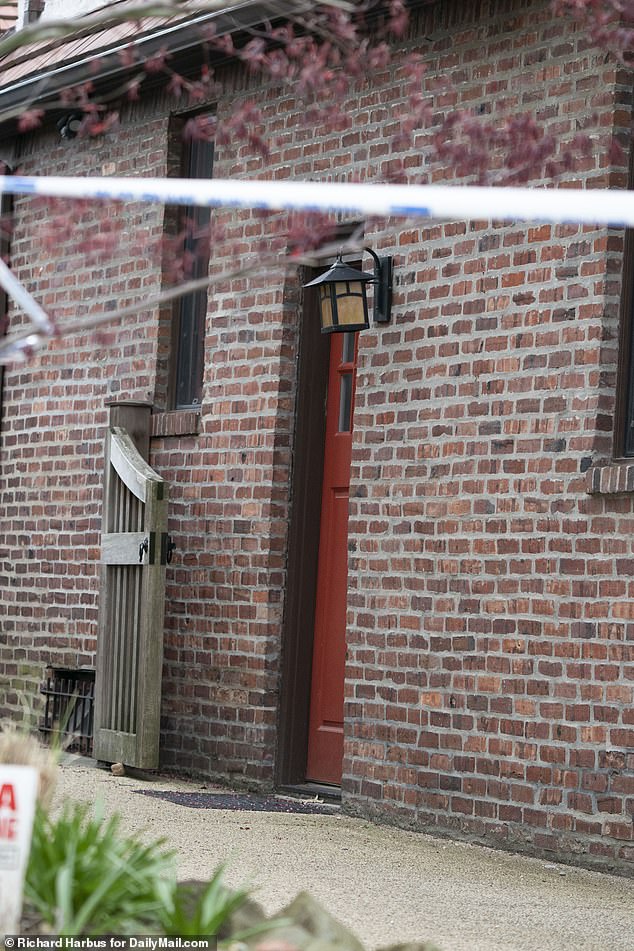 The electrician said the home had a separate entrance, pictured, that led down to the basement and up to the kitchen. Police believe Gaal’s body was taken through this side by after she was killed 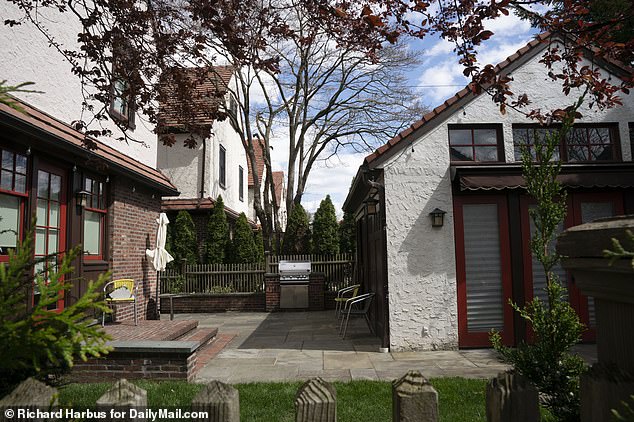 The backyard of the home belonging to Orsolya Gaal, where neighbors saw her hours before she died. The house remains a crime scene

Gaal’s 53-year-old financial advisory firm-founder husband, Howard Klein, worked from a home office there, Jack said. He and their eldest son, 17-year-old Jamie, were out of town visiting colleges on the West Coast at the time of the murder, police said.

Gaal’s 13-year-old son, Leo, was in the house at the time of the murder, and underwent police questioning on Saturday. He was initially escorted from the family’s home in handcuffs, but has since been released into the custody of an adult relative.

On Tuesday, friends and neighbors of the slain woman took to social media to share their grief and share tributes to the mother-of-two.

‘I’ll always remember how passionate you were about your boys and their education. I’m so sorry about how you left this world but I hope you find peace in the afterlife. Your boys are so lucky to have you as a mom, ‘wrote David S. Lee.

Another woman who claims she was friends with Gaal for 15 years wrote that they were ‘on the phone together just saying ago talking about colleges … No no no … My heart is broken.’

The NYPD is offering a $ 3,500 reward for anyone with information leading to an arrest in connection with the murder, and left posters advertising the payout around her neighborhood. 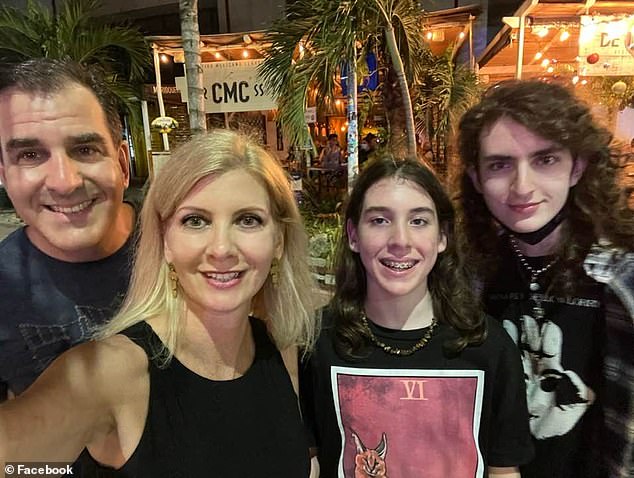 Gaal is pictured with her husband, Howard Klein, and two sons Leo, 13, and Jamie, 17, in December. Her husband and oldest son were out of town when she was killed. Her youngest son was in the home and was questioned but was released 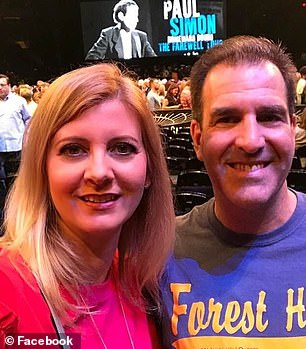 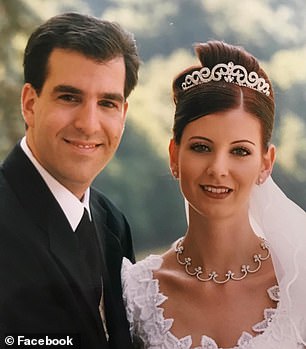 Gaal and her husband Howard Klein had been married for more than 20 years. He was out of town with their oldest son when she was killed

On Tuesday, unnamed police sources told the New York Post that detectives were looking to question a former handyman who Gaal had an affair with after scouring her electronic correspondences.

Although police have not yet released a name of the person they’re seeking, the workman is believed to have had knowledge of Gaal’s home, including where she kept a spare key.

The handyman is also thought to have had a romantic relationship with Gaal at some point. The romance apparently ended – but it’s unclear who broke it off.

The grisly story began when police found Gaal’s body in a duffel bag at 8:11 am on Saturday, less than half a mile from the property. They followed a trail of blood back to the house.

Due to the messy nature of the crime, police sources also doubted that it was premeditated. 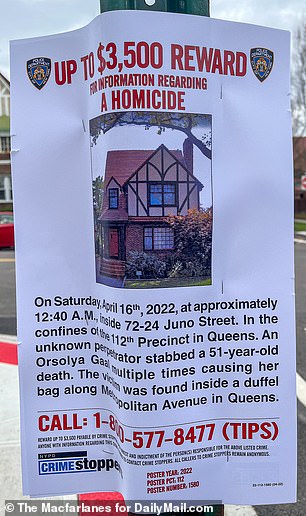 The NYPD is offering a $ 3,500 reward for information that may lead to Orsolya Gaal’s killer

‘[Detectives] do not think it was a planned murder, ‘a law-enforcement source said. ‘He left a blood trail for five blocks from the house. It was like a trail of bread crumbs.

‘If you want to kill somebody, you try to make it a little cleaner, be a little more prepared. He did not go with something to move her body. He took something from the house, ‘the source continued.

‘I’m sure with that kind of blood, there’s lots of DNA there. The killer’s DNA has gotta be in that blood. It’s not a clean scene. ‘

Klein, founder of the firm RK Equity, apparently received a foreboding text before his wife was killed, according to WPIX.

‘Your wife sent me to jail some years ago when you were living near Austin Street in Forest Hills,’ the message read. ‘I’m back, do not call the police or I will kill your family.’

No suspects have been named and the NYPD is refusing to answer questions about the ongoing investigation into her death.

Gaal’s body is believed to have been taken out of the home through a side door and dragged in a duffel bag before being dumped on a sidewalk next to a busy road.

Chilling surveillance video showed a person who may have killed her, according to police sources. That person was seen on home security camera footage wheeling a duffle bag down 75th Avenue, with Gaal’s body believed to be inside. 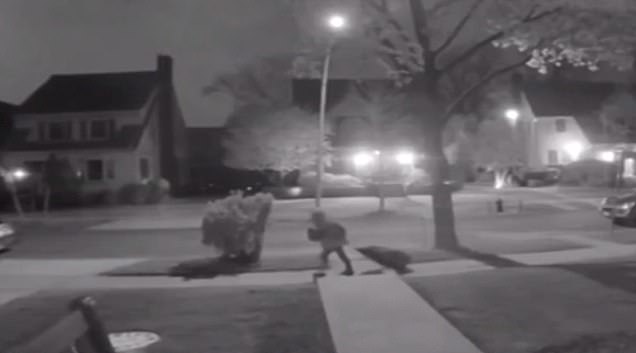 This is believed to be Orsolya Gaal’s killer, dragging her body along the sidewalk after stabbing her nearly 60 times in her basement in Queens on Saturday 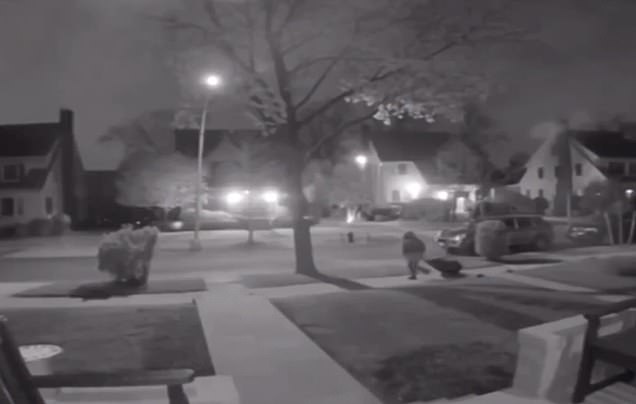 The suspected killer wheeling the body in a bag down 75th Avenue in Forrest Hills, Queens, on Saturday