A former physical therapist accused of killing his family in their Disney town home has sensationally blamed his wife for murdering his children during his trial and claims she did so with ‘poisoned pudding pie.’

‘I came home and my kids were dead,’ ‘Anthony Todt, 46, of Connecticut, told the jury Wednesday. ‘It was the most horrible day of my life. What made it more horrible was that my wife died in front of me too. ‘

Wednesday’s hearing was the first time he’d ever made that claim, having previously confessed to cops that he’d killed his family over fears of an impeding apocalypse.

The father-of-three claimed his late wife, Megan, 42, murdered their children with a poisoned ‘pudding pie’ because she believed they needed to ‘pass over’ ahead of the apocalypse, The Daily Beast reported. He claimed Megan, who had allegedly battled life-long chronic illnesses, believed by dying the family could be reincarnated into a better life.

After only two-and-a-half days of trial, both the defense and state rested their respective cases Wednesday. Closing arguments in Todt’s trial will begin Thursday.

Todt is accused of killing Megan, as well as their sons 13-year-old Alek and 11-year-old Tyler, daughter Zoe, 4, and dog Breezy in late December 2019 because he thought the world was ending.

The victims were allegedly drugged with Benadryl, suffocated, stabbed and left to rot for two weeks inside their Celebration, Florida vacation home.

He has pleaded not guilty to multiple counts of homicide. He was also charged with one count of animal cruelty for Breezy’s death.

A physical therapist (pictured in court Wednesday) stabbed his two sons in their Disney town home after they were already dead, a court has heard 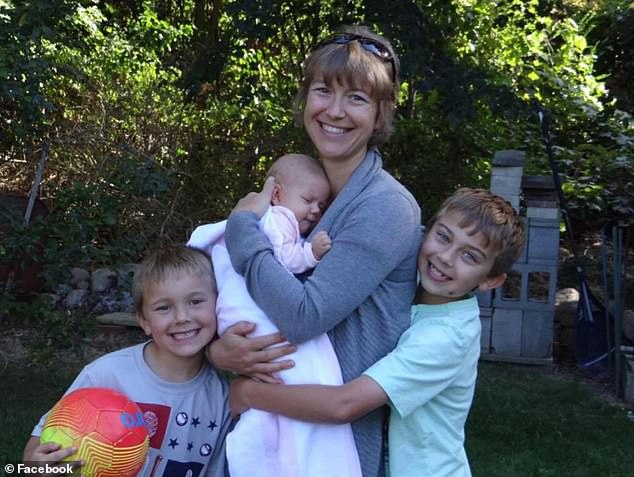 Todt allegedly killed his wife Megan, 42, as well as Alek, Tyler, their daughter Zoe (pictured together), and dog Breezy because he thought the world was ending

Todt’s accusation against Megan comes just two days after the jury saw a video of three police interviews following the murders in which he confessed to killing his family.

However, on the stand Wednesday, the accused killer claimed he has no recollection of confessing to the crimes.

‘I was covering for my wife. Obviously unsuccessfully. I had no clue how my kids died, ‘Todt said Wednesday. ‘I did not see this coming.’

He also said he had ‘no idea’ his wife would kill their family, alleging the morning over their deaths Megan had woken up ‘pain free.’

Todt claimed he returned to the Celebration, Florida home later that day and found Megan holding a suicide note.

‘My testimony today is the fact that Megan killed her kids and killed herself,’ he explained. ‘I said things that have been proven incorrect.’

‘She had blood on her shirt and after that, after I said a few uncolored words to her, I went and discovered the kids. I went into the rooms and found them dead, ‘he told the jury, according to WESH. ‘She said the kids were dead and Zoe is my little angel. That’s the first one I went to. ‘

He claimed Megan then drank a family-sized bottle of Benadryl and stabbed herself in the stomach.

The accused murderer told the jurors he yelled for help out the window but no one came. He said he could not leave to seek help because he feared for his family, so instead he began looking for the cell phones that his wife allegedly hid from him.

‘If I left her, I thought she was going to die. I thought in my decision making, the best chance was for her to tell me where the phones were, ‘Todt said.

The father also alleged that he tried to kill himself at least 10 times after his family’s deaths. He admitted to various suicide attempts including by overdosing on Benadryl and hanging himself.

He said he ‘chickened out’ when he attempted to knife himself.

‘I chickened out, yes,’ Todt told his murder trial. ‘I tried other means. I tried at least three episodes of Benadryl. ‘ 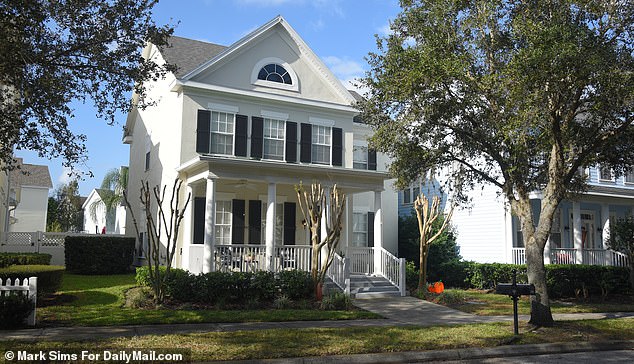 The victims were allegedly drugged with Benadryl, suffocated, stabbed and left to rot for two weeks inside their Celebration, Florida vacation home (pictured) 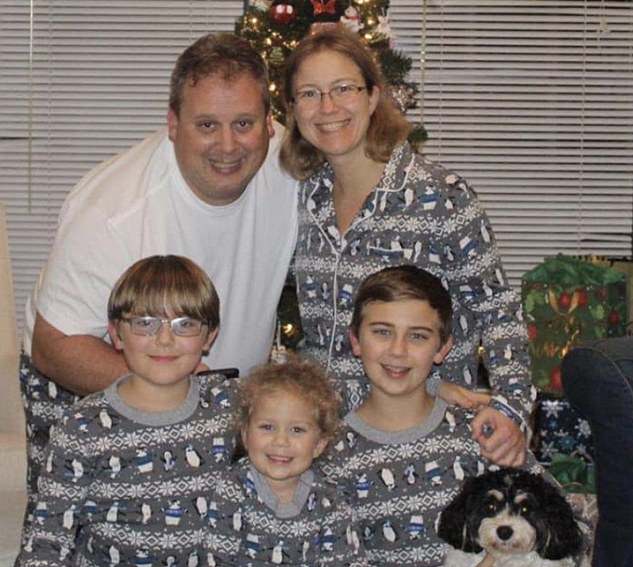 Cops found the victims’ decomposing bodies on January 13, 2020, when they went to arrest Todt on insurance fraud charges related to his physical therapy business. Pictured: The family

Cops found the decomposing bodies of Megan and the kids on January 13, 2020, when they went to arrest Todt on insurance fraud charges related to his physical therapy business.

They were first alerted to the family’s disappearance just after Christmas 2019 when relatives requested a wellness check at the house.

On Tuesday, jurors heard an interview Todt had with detectives at the time of his arrest in which he confessed to murder.

During the interview the disgraced father shared how he and Megan had initially planned to kill the entire family together.

‘How are you doing?’ a detective questioned Todt in the interview.

‘Is there somewhere else you’d rather be?’ the official asked.

Todt answered: ‘With my family on the other side.’

In that same interview, Todt detailed how he and Megan plotted and attempted their children’s murders.

‘So my wife made a pudding pie, nothing happened,’ Todt explained to officials at the time, adding that after the failed attempt the couple decided their family would bleed to death instead.

He said he suffocated Zoe first, then the boys. He then stabbed Alek and Tyler numerous times.

‘The kids were dead before Christmas,’ he told investigators, as heard in the recording.

He then added that Megan had tried stabbing herself to death and after repeatedly failing, asked him to suffocate her as well. Todt reportedly laid in bed next to her after she died. 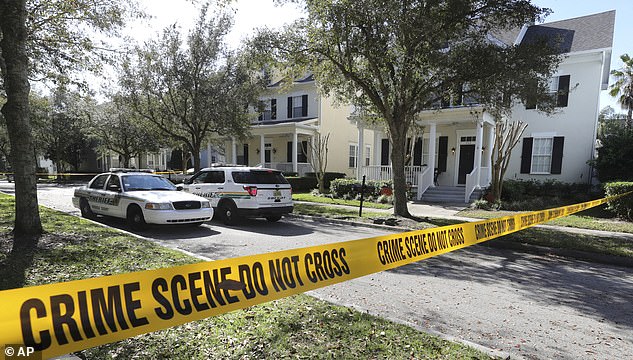 Special Agent Phelps told the court Monday that Todt was mumbling as authorities searched the house, and told police he consumed the Benadryl in an attempt to die by suicide 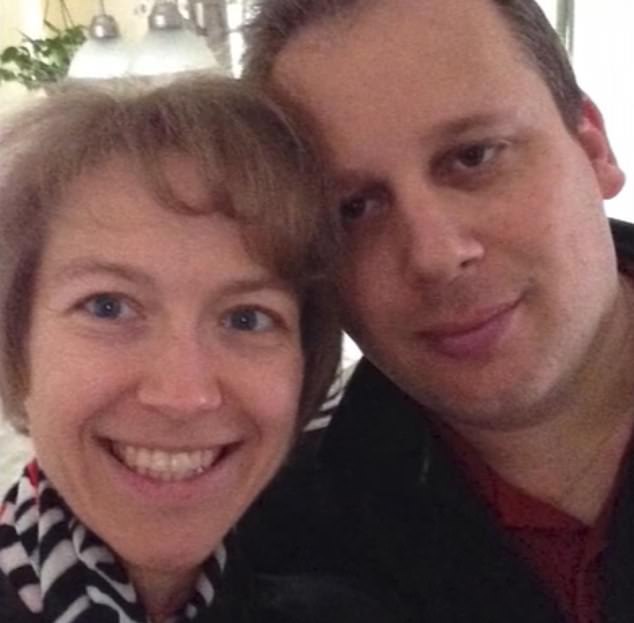 When Todt was arrested in 2020 he reportedly told investigators he and Megan had made a murder-suicide pact ahead of what they believed was an impending apocalypse. The couple is pictured together

Todt testified Wednesday that Megan started practicing a Hinduism-based religion with an afterlife component after she started battling lyme disease and depression and had suffered miscarriages.

‘Before she got sick we were blessed with two wonderful boys,’ he said on the stand, according to the Orlando Sentinel. ‘She went from a mom who provided for everything… to a person who could barely walk stairs on certain days.’

It is unclear exactly what religion they practiced but the couple allegedly started watching videos about the afterlife in April 2019.

Earlier this week, the court was playing a 911 call of one of Todt’s sisters saying he believed the world was ending in late December 2019 when she asked cops to check on the family.

Prosecutors on Monday alleged Todt carried out the crime ahead of what he and Megan believed was an impending apocalypse.

‘Everybody needed to die in order to pass over to the other side together because the apocalypse was coming,’ Assistant State Attorney Danielle Pinnell told the jurors.

Special Agent Michael Phelps told the court Monday that the family’s bodies were found ‘discolored, black and blue’ when they reached the house.

The victims, who were found wrapped in blankets, were killed by ‘unspecified violence’ combined with overdoses of Benadryl, medics said.

Emily Seda, a forensics supervisor at the Osceola County Sheriff’s Office, testified on Monday a cherry-flavored liquid Benadryl bottle was found in a trash can.

She said the bottle had Todt’s fingerprints on it. Boxes and and bottles of Benadryl were also found in the house, prosecutors said.

Special Agent Phelps told the court Todt was mumbling as authorities searched the house, noting how an arrest affidavit said during the search ‘Anthony could barely stand and appeared to be shaking’. 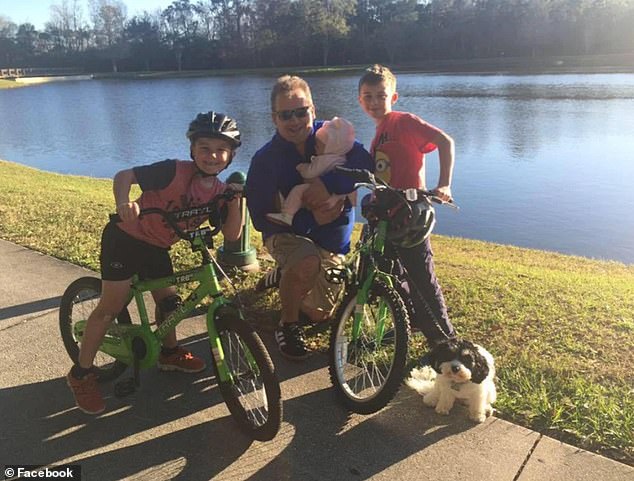 Todt is pictured with his three children in an undated photo

On Tuesday, ex-associate medical examiner Jennifer Nara took the stand, confirming that although Todt knifed Alek and Tyler in their abdomens, the pair died before they were stabbed. According to the Orlando Sentinel, she told jurors neither of the blows had hit vital organs.

But the court heard the two stab injuries inflicted on Megan were at least eight inches deep in the abdominal cavity and caused hemorrhaging.

She said: ‘To me, that indicates that she sustained those injuries antemortem – when she was alive.’

Asked if they were self-inflicted, she said: ‘Based on the autopsy, I was not able to determine whether she inflicted it herself or whether it was inflicted on her.’

The Orange-Osceola County Medical Examiner’s Office previously concluded all four were victims were killed by ‘unspecified violence’ combined with overdoses of Benadryl.