(Bloomberg) — The US Federal Reserve and a number of its global counterparts will launch a rapid-fire attack on inflation in the coming week as their commitment to bringing consumer prices under control gets ever more resolute.

Three days of central-bank decisions are expected to deliver interest-rate hikes adding up to more than 500 basis points combined, with the potential for a bigger tally if officials opt for more aggression.

Starting the onslaught will be Sweden’s Riksbank on Tuesday, with policy makers anticipated by economists to accelerate tightening with a 75 basis-point move.

That’s just a prelude to the main event, when US officials are expected on Wednesday to raise borrowing costs by the same amount to keep up the pressure on resurgent inflation. After another consumer-price index report topping forecasts, some investors have even bet on a mammoth 100 basis-point hike.

Thursday will see the most widespread action. Central banks in the Philippines, Indonesia and Taiwan are all expected to raise rates. The focus then shifts to Europe, with hikes of half a point or more predicted from the Swiss National Bank, Norges Bank and the Bank of England. Further south, the South Africa Reserve Bank will continue the efforts with a 75 basis-point move expected, and Egypt may act as well.

Three major central banks are likely to be conspicuously absent from the hiking fray, though. On Wednesday, Brazilian policy makers may pause after an unprecedented series of increases over the past 18 months.

The next day, Bank of Japan officials are likely to persist with an unchanged stance even as they worry about weakness in the yen. Then, their Turkish peers will probably continue their unorthodox approach of keeping rates low — despite inflation above 80%.

“In a busy week for monetary policy, we expect the Fed to hike by 75 basis points and the Bank of England by 50 basis points. Also on next week’s calendar are decisions from the central banks of Japan, Sweden, Turkey, Brazil, Indonesia and the Philippines, and an update on loan prime rates from the PBOC.”

Elsewhere in the coming week, US housing data, a fiscal announcement from the new UK government, and Japanese inflation data will also draw the attention of investors.

Click here for what happened last week and below is our wrap of what’s coming up in the global economy.

While all eyes are focused squarely on the Fed decision and Chairman Jerome Powell’s press conference, the economic data calendar will provide clues about the impact from central-bank tightening so far this year.

Reports on August housing starts and previously owned home sales are set for release Tuesday and Wednesday, respectively. The median projection for purchases of existing properties calls for a seventh-straight monthly decline.

Weekly jobless claims and S&P Global manufacturing and services surveys for September will round out a relatively quiet data week.

The BOJ’s board will make its policy decision Thursday amid speculation that Japan is close to intervening in the currency markets as the yen tests 145 to the dollar.

Governor Haruhiko Kuroda is expected to stand firm on keeping policy unchanged, although he’s likely to end his Covid support loans program, which may open the path toward adjusting forward guidance.

Thursday will feature a central-bank marathon in Asia, with Indonesia, the Philippines and Taiwan all setting policy, and the Hong Kong Monetary Authority reacting to the Fed’s overnight move.

Down under, the Reserve Bank of Australia’s Jonathan Kearns will speak on Monday about rates and property prices, while RBA Deputy Governor Michele Bullock will be speaking at Bloomberg on Wednesday in an exclusive event.

On the data front, Japan’s national inflation data out Tuesday is expected to keep creeping up. South Korea’s early trade data on Wednesday will continue to give insight into the pace of slowdown in the global economy. And Singapore releases inflation data on Friday.

While the UK will take Monday off as a national holiday for Queen Elizabeth II’s funeral, monetary-policy business as usual will resume on Thursday in a decision delayed by a week to allow for mourning.

The BOE meeting will be the first opportunity for officials to respond to the altered outlook created by new Prime Minister Liz Truss’s efforts to contain the cost-of-living crisis, and the pound’s drop to the lowest since 1985. Economists predict at least a half-point rate increase as officials confront inflation that remains uncomfortably high.

The next day, new Chancellor of the Exchequer Kwasi Kwarteng will deliver a “fiscal event” where he’s expected to confirm plans to reverse a recent rise in national insurance — a payroll tax — and set out more detail about Truss’s support package.

The SNB might raise rates by 0.75 percentage point at its quarterly decision on Thursday, an aggressive move to match the euro zone’s increase, even as inflation in Switzerland is much lower than in the rest of Europe. The Norwegian central bank will likely hike half an hour later too, keeping up an accelerated pace after core consumer prices clearly exceeded its forecasts.

Earlier in the week, alongside an expected rate increase by Sweden’s Riksbank, investors will focus on how much policy makers plan to accelerate future tightening plans amid growing evidence that the largest Nordic economy is headed for a recession in 2023.

In the euro region, speeches by European Central Bank Vice President Luis de Guindos and Bundesbank chief Joachim Nagel may focus investors, along with the first round of purchasing manager surveys for September, due on Friday.

Looking south, data in Ghana on Tuesday will likely show economic growth decelerated to 3% in the second quarter because of rising rates and a slump in the cedi that’s caused already-surging prices to soar further.

Meanwhile, on Wednesday, a report in South Africa is set to reveal that inflation eased in August after gasoline costs declined, though the rate is still expected to stay above the central bank’s 6% ceiling.

Concerns about further rand weakness and a de-anchoring of price expectations will be a focus of the SARB’s Monetary Policy Committee on Thursday. Forward-rate agreements starting in one month — used to speculate on borrowing costs — are fully pricing in a 75 basis-point increase, with odds of a bigger move of 100 basis points at 82%.

Turkey on Thursday is likely to leave rates on hold after a shock cut in August, though a slowing economy and the approach of next year’s elections mean more stimulus remains on the agenda.

Egypt will likely hike interest rates on the same day as inflationary pressures rise and the pound continues its gradual decline.

The Brazilian central bank’s prized survey of economists leads off the week, with the gaze firmly on 2023 and beyond. Later on Monday, Colombia reports July economic activity, likely showing some cooling from May and June.

Next up, second-quarter output figures in Argentina may show surprising strength given the political and market turmoil buffeting the South America’s second-largest economy.

The highlight in Chile will be minutes of the central bank’s Sept. 6 meeting, where policy makers accelerated tightening with a bigger-than-expected 100 basis-point hike to push the key rate to a record 10.75%.

Look for Mexico’s mid-month consumer price readings to edge up ever so slightly from 8.77%, suggesting that the peak inflation Banxico forecast for the third quarter may have arrived.

Brazil’s central bank is widely expected to hold its key rate unchanged at 13.75% after a record 12 straight hikes from 2% in March 2021. Traders see a less than a 50% chance of another increase in the months ahead, and it’s possible that Brazil — among the first to start tightening worldwide in March 2021 — also becomes among the first to finish.

SHANGHAI — Baoji, an industrial city in northwest China with a population of 3 million, doesn’t conform to most people’s idea of{...} 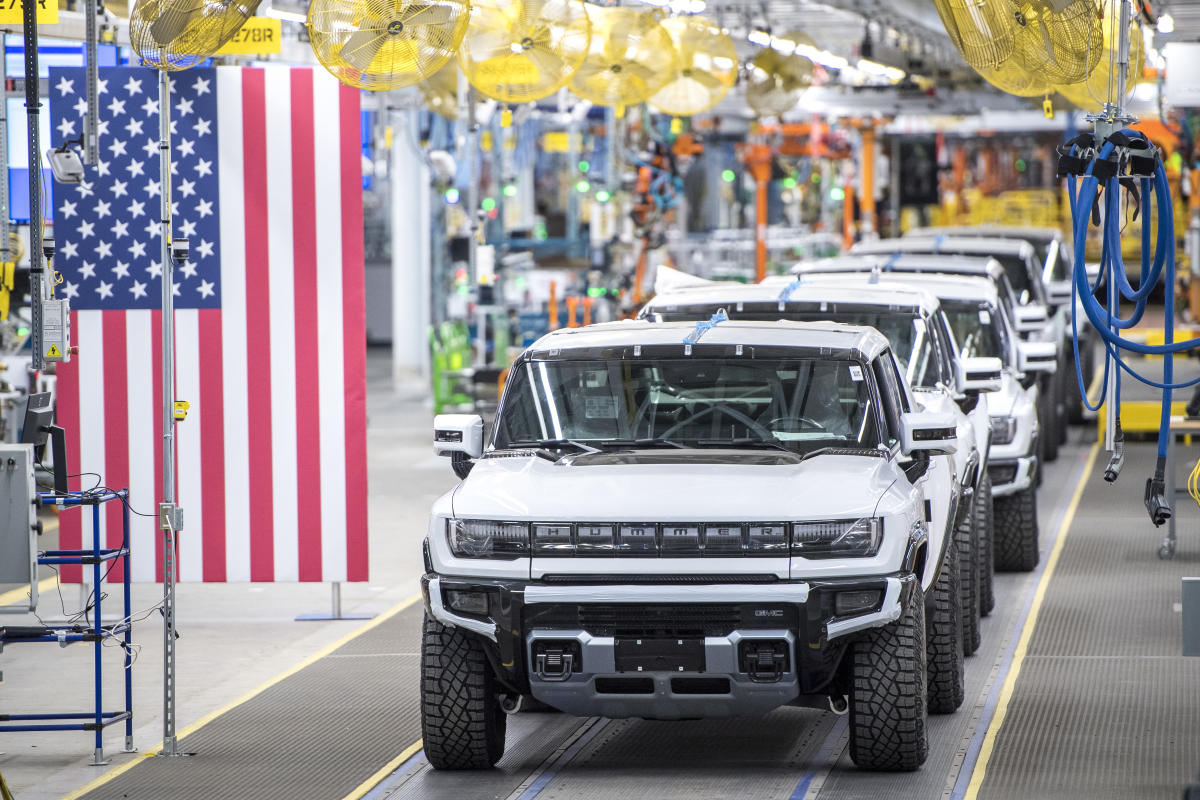 General Motors (GM) reported profit jumped in the third quarter, driven by record revenue and robust demand. For the quarter,{...}