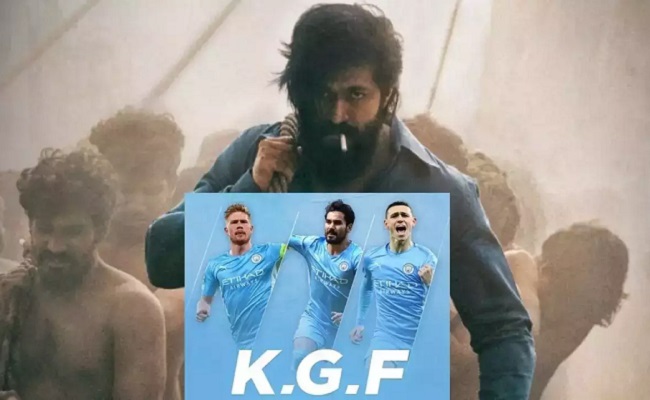 Even as Prasanth Neel’s Yash-starrer “KGF: Chapter 2” notched up Rs 625 crore from the box office in its first week, it found a global fan in the English Premier League’s No. 2 team, Manchester City, which took to Instagram to run a poster featuring three of its finest players, whose first or family names start with the initials K, G and F.

Splashed with the club’s light blue official color, the poster plays up Man City’s three star midfielders – the Belgian player Kevin de Bruyn, whom experts regard as the ‘complete footballer’, the German Ilkay Gundogan, who was previously with Dortmund, and the 21-year-old English sensation, Phil Foden.

It was Farhan Akhtar, whose Excel Entertainment presented the superhit film to the North Indian market, who took notice of the poster and retweeted it with the comment: “When your team and film find each other.”

Akhtar, without a doubt, is a fan of Man City, whose KGF poster got more than 1,30,000 likes and over 4,000 comments within hours of it being put up by the club.

Released nationwide on April 14 in Kannada, Telugu, Hindi, Tamil, and Malayalam, “KGF: Chapter 2” has been written and directed by Prashanth Neel, and its star cast is led by Yash, with Raveena Tandon and Sanjay Dutt also playing key roles.