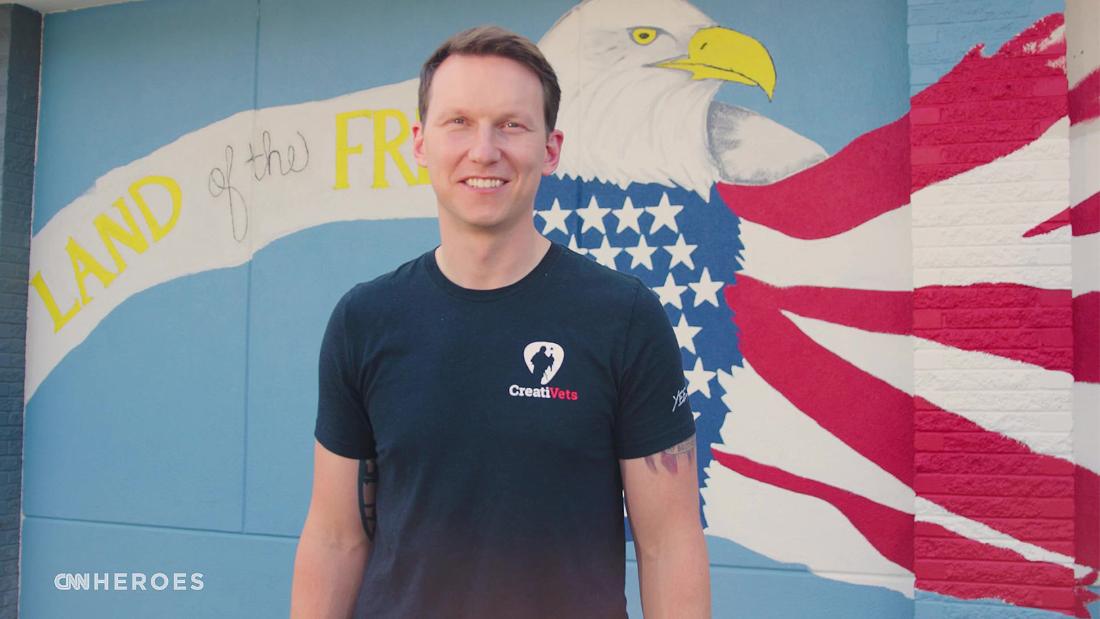 From battlefields in Iraq to the Nashville music scene, how a Marine veteran is using art to heal

“I had this urge inside of me,” he said. “I joined the Marine Corps infantry. … I wanted to be the first person going overseas and fighting.”

During basic training, he was selected for a special duty of guarding then-President George W. Bush at Camp David. Once he received clearance and completed that 14-month assignment, he was still determined to deploy.

“When I touched down in Iraq, I was prepared to die,” Casper said. “I was just ready to do my job.”

Within the first four months, his Humvee was hit by IEDs four separate times. During one mission, his good friend and gunner, Luke Yepsen, was shot by a sniper and died beside him.

“It was so hard to comprehend what happened because we go to work the next day like nothing happened,” Casper said. “When you’re in the infantry, they have to strip away all your vulnerabilities. They have to, because (otherwise) you’re not going to survive in war.”

Casper was forever changed after serving in Iraq, and he struggled with the transition home. He started failing the college business courses he had enrolled in and developed crippling anxiety.

“I couldn’t do it,” Casper said. “But I knew I was smart. You had to have a certain IQ to guard the President.”

He went to his local VA hospital and learned he had post-traumatic stress, degenerative disk disease, and tinnitus, among other medical issues.

Casper decided to change his major to art, thinking it would be an easy degree for him to complete.

One of his early projects was a pastel drawing of his friend Luke’s gravestone. He had chosen red for the grass, and when his classmates saw it, they described how it made them feel and why they thought he used certain colors.

Casper had found an outlet for his pain, and he later realized he wanted to share the healing power of the arts with other struggling veterans.

The songwriting program is a free, three-day trip to Nashville, Tennessee, where veterans are paired with accomplished songwriters and musicians to write and record a personal song.

They write in dressing rooms backstage at the Grand Ole Opry. For most of the veterans, it’s their first time writing music. The next day, they record their song in a studio with a singer and session musicians.

“After they write that song, they’re on cloud nine because they finally had the words to say what they never could say before,” Casper said. “It’s incredible to see their life experience go from just a story I tell to a song I could share with everybody.”

The visual arts program is a free, multi-week program at an art school, such as the School of the Art Institute of Chicago or University of Southern California. Veterans spend the time learning different mediums and working on a final project.

For Casper, his mission is to save lives and find those veterans who could benefit the most from participating. That’s why he aims to make each program as enticing as possible.

“How hard would it be to turn down a free trip to Nashville, Tennessee, to write backstage at the Grand Ole Opry with (a hit) artist or songwriter?” he said. “You won’t. You can be at the worst place in your life and be like, ‘I’m going to hop on that plane.'”

To date, the organization has helped more than 900 veterans. Through this work, Casper says he has found his purpose and a way to honor his friend.

“Every time a veteran gets saved, I’m like, ‘Luke just saved someone else,'” Casper said. “I just know he’d be looking down just being like, ‘You’re doing what you’re meant to do. You’re truly living for both of us now.'”

CNN’s Meg Dunn spoke with Casper about his work. Below is an edited version of their conversation.

CNN: What led you to enlist in the US Marines?

Richard Casper: There were a lot of reasons for me to join the military. The biggest one was this sense of service. The other part of it was, I’m from a town of 1,100 people. My three older siblings have all been to prison and jail. My dad I don’t think graduated high school, but he got his GED. My mom graduated high school and worked in a factory all of her life. We grew up on food stamps. And I was like, “I don’t know how to get out of this town without the military.” So, all those things combined is what really made that decision easy for me.

CNN: Your organization has a deal with a record company. How has that helped expand the work?

Casper: We’re not going to be able to help every veteran, but our music could touch every veteran. We struck up an admin deal with Big Machine Records. It’s the biggest independent record label in the country. And now we’re releasing music with some of their artists who are putting their vocals on the song. We’ve had over four million streams of our music.

So, when you hear a very distinct voice, like Justin Moore, and you try to look up the song, you see that the artist is actually CreatiVets featuring Justin Moore. And then you’re like, “Well, what is CreatiVets?” And you search us and you find out we’ll pay for your flights, food, housing to Nashville to do the same thing that that veteran did. So, we’re legitimately reaching the homes of veterans who don’t want help, and they’re getting so excited about this that they’re now coming to our programs.

CNN: What are your hopes for the future of CreatiVets?

Casper: I think that CreatiVets is in a place now where we could help design programs that are in the military. As you transition and you’re learning how to write a resume and go to a job interview, I think there should be a parallel in there that helps you with your emotional intelligence and says it’s okay to be able to write songs, to do art.

So, I want to create curriculum that you have to take as you exit. That they understand that no matter where they go in life, they could use art and music to heal themselves. You could be out in the furthest boonies; you still have an outlet where you don’t need other people. You can do it yourself through art and get it out. That’s my big hope is that one day we could be in the military as a transition point.

Want to get involved? Check out the CreatiVets website and see how to help.
To donate to CreatiVets via GoFundMe, click here

Selena Gomez is sharing a look inside her mind. The singer’s latest song, “My Mind & Me,” details the journey of{...}