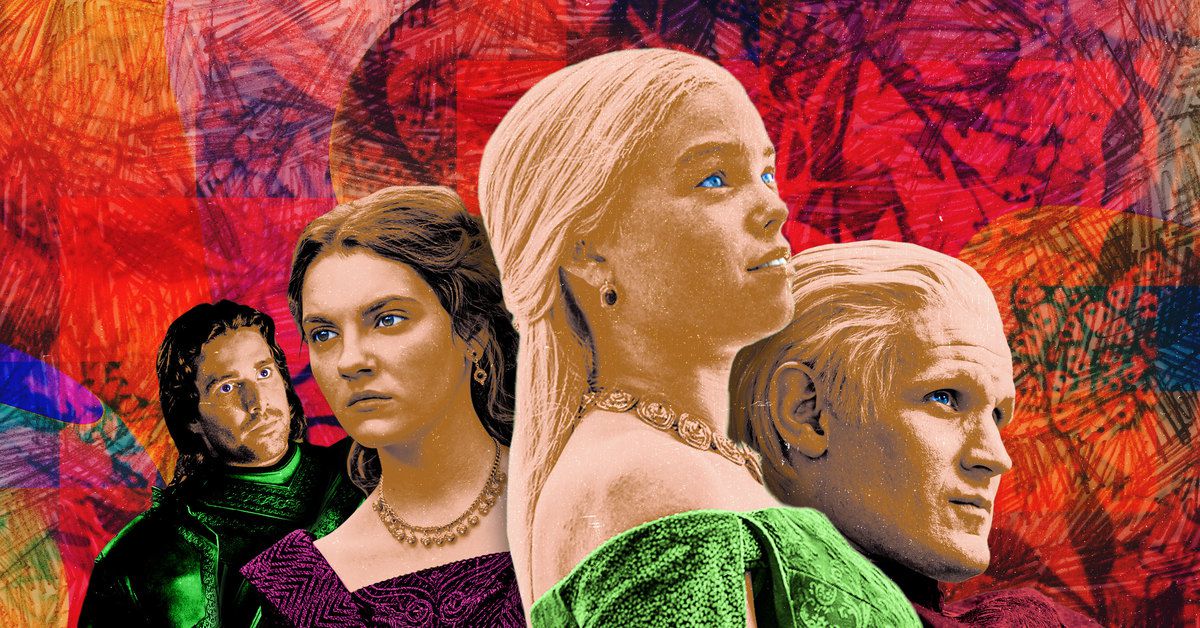 ‘House of the Dragon’ Just Dropped a New Westeros Wedding

In the Game of Thrones premiere, a bloody brawl breaks out at the wedding between Daenerys Targaryen and Dothraki warlord Khal Drogo. Such violence is a customary element of the festivities, Illyrio Mopatis explains: “A Dothraki wedding without at least three deaths is considered a dull affair.”

That line apparently applies across the Narrow Sea as well. The Red Wedding marked the death of Robb Stark, the king in the North, as well as his wife, unborn child, mother, direwolf, and army. The Purple Wedding spelled the end of Joffrey, the ruler of the Seven Kingdoms. And now, in the fifth episode of House of the Dragon, “We Light the Way,” a pre-wedding banquet to celebrate the union of Rhaenyra Targaryen and Laenor Velaryon ends with a murder of its own.

A Westerosi wedding is never a quiet occasion. And while Dragon’s latest nuptials don’t culminate in the killing of a king—just Joffrey Lonmouth, secret paramour to Laenor—they still spur a great leap forward to the coming civil war.

Rhaenyra and Laenor’s welcome feast offers numerous parallels to weddings in our real world, while reinforcing many of the same lessons. For instance, common advice says to never invite an ex to a wedding—and “We Light the Way” demonstrates why, when the recently slighted Criston Cole instigates the duel that converts a Pride & Prejudice–esque group dance into chaos.

Nor is Criston the only ex who causes distracting drama during the feast. Daemon is only sort of an ex, because he hooked up with his niece on just one occasion, but he definitely causes drama in numerous ways. First, he shows up in the first place, despite his banishment on order of the king in the last episode; then he argues with Gerald Royce, who’s upset about the murder (ahem, tragic accidental death) of his cousin Rhea, Daemon’s wife; and finally he grabs the bride-to-be in the middle of the dance floor, attempting to win her over and prevent her planned marriage from proceeding.

Daemon also inspires another modern wedding trope, in which single guests pair off for future hookups. We don’t see what comes of his meeting with the now-grown Laena Velaryon—but the two engage in heavy flirting in just a short time together on the dance floor.

Yet the most important and intentional affront comes from Alicent Hightower, normally one for social propriety, who upstages the bride with her arrival midway through Viserys’s welcome speech. Combining character development, dramatic stakes, and a brilliant blend of aesthetic beauty and plot propulsion, Alicent’s minute-long entrance is the most thrilling moment of all five Dragon episodes to date.

Alicent chooses the moment to make her grand entrance with care and precision. She stands alone, implicitly inviting the room’s attention, and saunters through the center of the room, her face a mask, to the dais at the front of the hall. When she arrives, she twists the knife further by asserting her place in the royal hierarchy.

“Stepdaughter,” she calls Rhaenyra, her former friend and sister-in-spirit, for the first time on the show. Then she kisses the king and takes her proud place by his side.

As Alicent strategically makes herself the center of the whole realm’s attention, the guests—all of them her royal subjects—stand, and foreboding music swells, her choice of attire shines brightest of all. She doesn’t wear white to her daughter’s wedding, to be fair, but rather chooses an even more ostentatious color: a lustrous emerald green that catches everyone’s eye.

Like Victorian era floriography, the symbolic meaning of this color—so distinct from the red-on-black Targaryen iconography she wore last episode—is clear to all of the watchful wedding guests.

“The beacon on the Hightower—do you know what color it glows when Oldtown calls its banner to war?” Larys Strong asks in a whispered aside.

His brother, Harwin—who later dances with Rhaenyra and rescues her from the fray single-handedly—answers with gusto: “Green.”

Alicent might not be happy about her embrace of such brazen political machinations, and indeed seems conflicted throughout the episode—but such demonstrations are a necessary evil for those who seek to flourish in the Red Keep. And for Alicent in particular, who’s spent so many episodes and years subordinating her desires, hiding her feelings, and playing the dutiful daughter, wife, and mother, embracing her agency in such a public fashion is a crucial step.

“I’m the queen,” Alicent tells Larys early in the episode. “I have no shortage of allies.” But her face wavers at that statement, because she is actually alone in the capital. Her father’s gone, her best friend is swearing falsehoods on the memory of her dead mother, and as “King of the Narrow Sea” displayed, she feels trapped, both mentally and physically, in the position of pumping out babies—who might soon be in danger because of the threat they pose to Rhaenyra’s succession—for the king.

Now, though, she’s truly invested in playing the game of thrones, after only dabbling in the possibility before. She’s making her presence felt and flexing her royal power. And she has not one or two powerful allies, but potentially three.

House Hightower—whose motto provides the episode with its title—will surely bring Oldtown’s wealth to her aid in any conflict. “You stood tall,” her Uncle Hobart, leader of the house, tells her after her momentous entrance. “Know that Oldtown stands with you.”

Larys Strong is also nominally on her side after trading niceties and information in the godswood, though he’s such a devious schemer—his lines in that scene might as well have tumbled straight out of Littlefinger’s mouth—that he might not be trustworthy.

And most of all, she has a new ally in Criston Cole, knight of the Kingsguard, who is prepared to stab himself after Rhaenyra’s rejection and Joffrey’s violent murder—only for Alicent to interrupt him and help a vital character switch from Rhaenyra’s grasp to Alicent’s own.

Thrones gave us the Red Wedding and Purple Wedding. In the future of the Dragon timeline, once the battle lines emerge and civil war erupts, perhaps this will be known as the Green Wedding in honor of Alicent stealing the show.

We see more kilts in our future. Starz announced Aug. 4 that they’ve green-lit the Outlander prequel series Blood of My Blood,{...}

Even Lisa Kudrow feels insecure sometimes. While the Friends actress is a style icon to many, she didn’t always feel that way. She{...}

Deadline caught up with actress Joey King at the premiere of the David Leitch’s new action-thriller Bullet Train. When asked{...}