The typical price of a property increased £ 27,000 in the year to February, new figures from the Office for National Statistics show.

It has lead one expert to ask: ‘Has the property market ever been so disconnected from economic reality?’

The latest data represents one of the biggest annual increases in average property prices for more than 15 years.

Annual house price inflation hit a record 13.5 per cent in June 2021 and 11.5 per cent in September, due to expiring deadlines for a temporary reduction in stamp duty.

February’s jump was beyond the expectations of experts, with analysts forecasting a 10.1 per cent rise.

Ceri Lewis, house prices statistician at the ONS, said: ‘House prices rose again this month, with prices in the UK and England now at record levels.

‘All nations and regions saw increases, with London experiencing its strongest rise in a year.’ 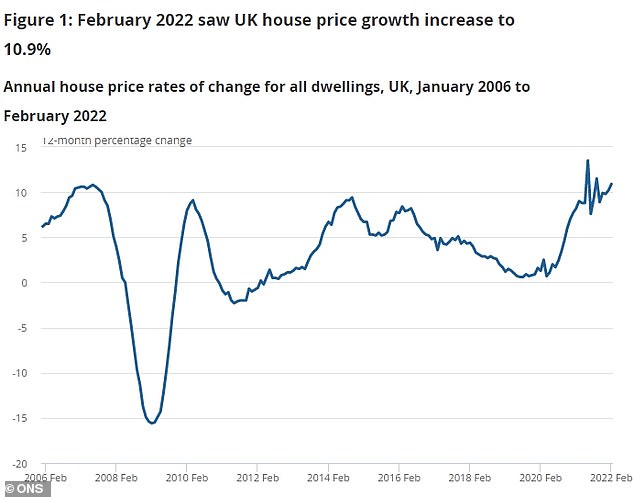 One direction: Property prices increased by 10.9% in the year to February, the ONS said 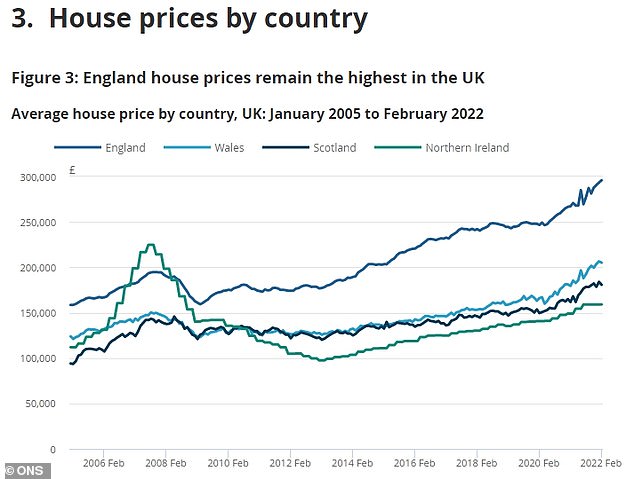 Variations: A chart showing property price shifts in different areas of the nation

Prices across London saw the lowest annual growth in England but picked up slightly to rise by 8.1 per cent as the return of City workers bolstered the capital’s recovery.

Andrew Montlake, managing director of Coreco, said: ‘Has the property market ever been so disconnected from economic reality?

‘For prices to rise further in February should create more unease than it does celebration. Yes, the jobs market is strong but the latest inflation data coupled with stalling economic growth in February suggest the bull run will soon come to an end.

‘Even then, though, average property values ​​are unlikely to fall by much as mortgage rates are still very competitive and supply levels are ridiculously low.

‘As it always does, the supply and demand imbalance will support average property values ​​moving forward, even as we enter a potentially significant economic storm.’

‘Demand is still well ahead of supply but concerns about the rising cost of living, squeezed pay packets and potentially further interest rate rises are reducing price growth and transaction numbers.

‘Looking forward, we expect activity to return to more’ normal ‘pre-pandemic conditions as supply picks up as part of the usual spring bounce.’

One expert thinks it is ‘astonishing’ that property prices have kept rising amid soaring inflation and a cost of living crisis affecting millions of households.

Iain McKenzie, chief executive of The Guild of Property Professionals, said: ‘During a time when household bills are increasing for millions of people, coupled with soaring rates of inflation, it’s astonishing that house prices continue to climb.

‘There was an expectation that following a slower pace of growth in January, the figures for February would continue to show a cooling down of the market, but there does not seem to be a sign of that anytime soon.

‘An annual price change of 10.9% means that the end of incentives such as the stamp duty holiday, in place this time last year, have done little to deter people from wanting to purchase their own home.

‘House prices continue to be driven by the lack of available properties on the market and the speed at which many of them are sold. With the demand for housing still there, prices will defy the expectations of any readjustment. ‘

Some links in this article may be affiliate links. If you click on them we may earn a small commission. That helps us fund This Is Money, and keep it free to use. We do not write articles to promote products. We do not allow any commercial relationship to affect our editorial independence.