Just across the road from Heaton Chapel train station lies a row of tiny independent shops, housed inside former coal merchant huts dating back to 1864. There’s a florist, a take-out coffee shop, a cake store, a vintage shop, and a local newspaper office selling homeware and gifts made by 30 local artists and businesses.

The first two huts, located on leafy Tatton Street in Stockport, are the original outbuildings, with wooden facades and bay windows. The florist – Mary’s Flower Basket – has a wonky front door and a worn-down post outside that was once used to tie horses to.

The other three were erected in early 2020, built by a local builder who wanted to replicate the original disused huts that were damaged in an arson attack years earlier. Nick Harris, a former social care worker, transformed what was being used as the florist’s office into his little coffee hole; an ideal stopover for morning commuters.

He had moved to the area and would visit the florist with his son, 9. Owner Maria, the daughter of the eponymous Mary, then offered him the 1.8m by 3.5m space next door, which he moved into in September 2018.

“Everything I’ve always wanted in my work life I’ve got from being here,” he says. “There’s a really big coffee community that’s really supportive and a lot of geeks in coffee.”

Nick always loved bar work, starting out in a bar when he was 16, and in the late ‘90s worked in Sheffield’s iconic The Leadmill nightclub. There, he met his best friend, who sparked his love of coffee.

“He got me into it,” Nick explains. “When I used to manage a homeless day centre, because I’m vegan, I didn’t used to eat, I just used to drink instant coffee to keep me going, so I swore I would never drink instant again.

“He bought me an Aeropress and I just got into the science of it.” B’Spoke Coffee now has queues of commuters each morning getting their coffee fix – a trend Nick noticed took off following lockdown in 2020.

“Before lockdown, we bumbled along but then got really busy,” he says. “People were more worried about catching the train, pressured, and then they’d get a coffee at the other end, so my competition was Caffè Nero and Costa in Manchester.

“Through lockdown, people had more time and tried our coffee and thought ‘this is really good.’ Even when people were working from home, people were going for walks as exercise to get out of the house and they’d come to us.”

While trade has dropped off slightly since the height of the pandemic, Nick is still way ahead of where he thought he’d be with his business. “Everyone who comes here is really friendly, people like a bit of banter in the morning,” he adds. “And there is a real community along here with the other business owners.”

B’Spoke Coffee is open Monday-Friday from 7.30am-2pm and Saturdays from 9am-2pm.

She had been working from home, baking for special occasions, but her business started to outgrow her kitchen. “People were saying you need to come out of your kitchen, I was getting bigger and bigger, but I was worried about paying rent and if I could justify it,” she says. “Then I spotted the huts being redone.”

Diane says her eldest children thought she was “crazy” for expanding her business in lockdown. “I couldn’t explain it. I just needed to do it – it was a leap of faith. I was just going to try it for six months and give it a go and here I am.”

The hut she now occupies had already been let out when they went on the market. Luckily for Diane, the woman’s grandson was in her son’s class at school. “I was talking out of chance with the parents saying ‘I was after one of those’, then they contacted me as she had decided it was too much for her, so I got the first refusal,” Diane explains.

Through word of mouth and by building her social media pages, Diane’s cake business boomed. While most of hospitality was forced to close due to Covid restrictions, she was able to remain open as a takeaway, reaping the benefits of locals on lockdown walks.

“It is a good spot. Fortunately for me, it wasn’t planned, but I’m next to a coffee shop. So a lot of people, especially when he (Nick) gets queues, they’ll hover here and then end up buying cake to go with it.”

With no space for a kitchen or a water mains, Diane still bakes from her kitchen at home in Reddish, but plans to open a second store where she can bake from too. “My house is always full of cake,” she laughs. “I have to tell my kids not to take anything off the table because it’s for the shop.”

Cakes Of Bliss is open Monday-Friday from 10am-4pm and Saturdays from 10am-3pm.

One hut down is Rosemary Lane Vintage, run by Kathryn Young. She opened her own store in April of this year after previously managing vintage shops, including for charity shop Sue Ryder, and selling online.

On where her love of vintage clothing came from, Kathryn’s mum, who is visiting from Ireland this week, recalls: “When she was at high school, I had a suitcase up in the attic of all my old stuff from when I was her age, and she was amazed by it.

“There was a pair of dungarees… your face just lit up,” she adds, smiling at her daughter. Kathryn, who previously lived in Chorlton, fell in love with the area when she was visiting a friend at the start of the year.

They hit the Savoy Cinema in Heaton Moor followed by drinks in Nook Café Bar. Shortly afterwards, she ended up finding a flat on the same road as the pre-loved clothing store. “That night I decided I was going to move to Stockport,” she says. “Then the next morning when I was walking to get the bus from my friend’s, I happened to walk by and saw a little ‘To Let’ sign in the window.

“I came to view the hut on Valentine’s Day. Everything happened at the right time.” Kathryn now has plans to do late-night openings with a DJ in summer – following the success of her musician friends busking outside the store. 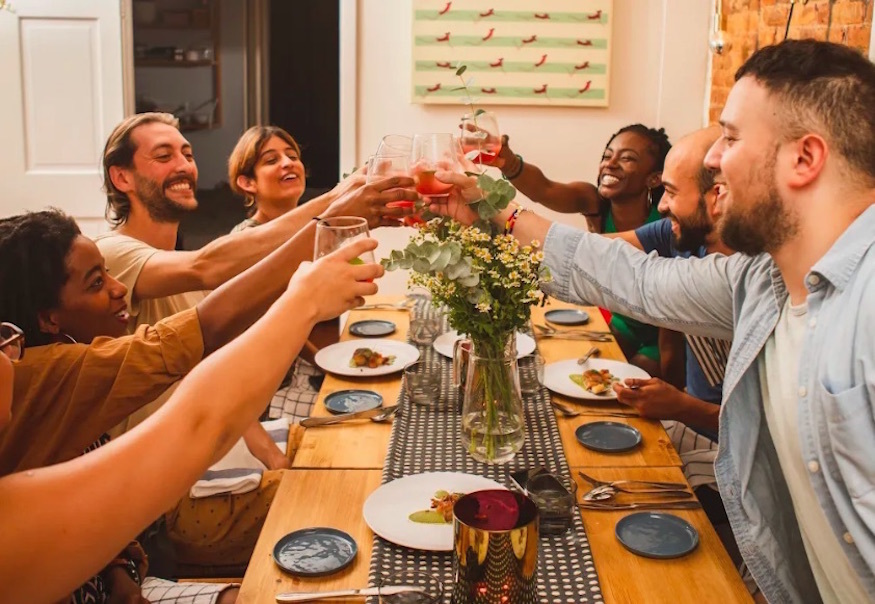