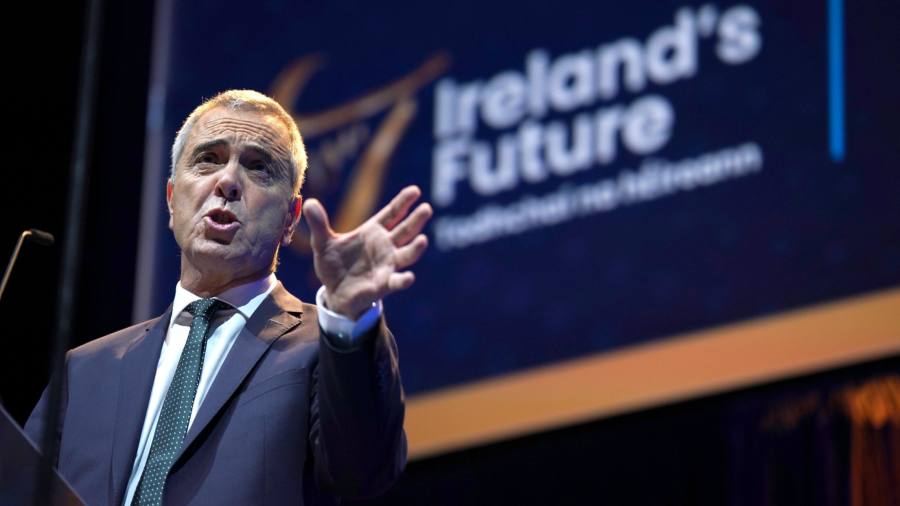 Irish senator Frances Black surveyed the crowd. “What a buzz!” she exclaimed to the 5,000 people packing the concert hall in Dublin. Topping the bill was not Beyoncé, Roger Waters or Bob Dylan — past stars of the 3Arena — but local actors and politicians. The sellout show? A “conversation” about Irish reunification.

Organised by Ireland’s Future, a three-year-old advocacy group chaired by Black, the aim of this month’s event was to spur debate and build support for a “new and united Ireland”, a century after it was divided into a 26-county republic and the six-county British-run Northern Ireland.

With more events planned, talk of unity on the island of 7mn is gathering momentum, spurred by Brexit, changing demographics and the pro-unity Sinn Féin surge to become the biggest party on both sides of the border.

Leo Varadkar, who will take over as Ireland’s Taoiseach, or prime minister in December, told the conference the “noble and legitimate aspiration” of reunification “has come a long way in a very short time”.

Popular actor Jimmy Nesbitt, a Northern Irish Protestant, told the conference that “to many from my background, talk of a united Ireland is difficult, but the conversation is out there”, adding he is open to an informed discussion about unification.

Even Reverend Kyle Paisley, whose firebrand father Ian, a former Northern Ireland first minister, vowed never to surrender the region’s UK status, told an Irish Senate consultation last week that “the Emerald Isle becoming a single political entity is not so easily talked down as it used to be”.

For three decades Republican paramilitaries waged war on the British state and loyalist gunmen fought to protect their UK identity. Under the 1998 peace deal that ended the conflict, London must call a referendum on unity in Northern Ireland when there appears to be majority support for reunification. A parallel poll would be held in the republic.

As yet, polls show that reunification does not command majority support in Northern Ireland. A survey by Lucid Talk in August found only 41 per cent in a region still trying to overcome a legacy of division would vote for reunification today, rising 10 points in 10-15 years.

Nonetheless, census results last month revealed that in its centenary year, Northern Ireland had more Catholics than Protestants for the first time. In addition, a growing number of people identified as Irish while the ranks of those calling themselves British was falling, fuelling a sense of change. People from Northern Ireland can identify as British or Irish or both.

In the republic, most people like the sound of reunification. “I do expect to see it before I die,” said Cora Richardson, an 87-year-old former missionary whose uncle was condemned to death — although later spared — for his role in the 1916 Easter Rising during Ireland’s struggle for independence from Britain.

An Ireland Thinks poll this month put support at 61 per cent — but surveys show only around 40 to 50 per cent back higher taxes to achieve it.

In Northern Ireland, Brexit has only intensified frustrations. A row over trading rules for the region, where the majority voted to remain, has paralysed local politics. Reunification with EU-member Ireland is a way “to get away from the six-year torture process that is Brexit,” said Ben Collins, a former unionist campaigner and author of Irish Unity, Time to Prepare.

Ireland has changed dramatically since partition. Once fervently Catholic, it is now increasingly secular, multicultural and progressive after referendums legalised gay marriage, abortion and divorce. It is also far richer than the once more prosperous north, which is home to some of the UK’s most deprived areas and is still struggling to heal a legacy of division.

With memories of the UK’s divisive Brexit vote in 2016 still fresh, in which the mechanics of exiting the EU were left vague, economists say careful planning on the implications for pensions, health, education, policing and the economy is vital.

Sinn Féin leader Mary Lou McDonald, who is pushing for a reunification referendum within a decade, has urged creation of a citizens’ assembly — a forum used, for example, in the run-up to the legalisation of abortion.

The conference, funded through donations and ticket sales and attended by representatives of 10 political parties, was big on emotion but short on detail — although a 125-page book on sale at the event examined the implications for the economy, health, social policy, the environment and sport more closely.

What form reunification could take — whether Northern Ireland should simply be absorbed into the republic or retain a level of devolution — remains unclear. Varadkar was booed for suggesting keeping its own courts, education system and other institutions but under Irish, not British, sovereignty; nonetheless, he called for “more events like this . . . with more voices who challenge our views and force us to confront uncomfortable realities”.

Jarlath Kearney, a former Sinn Féin special adviser who has now left the party and politics, said “a steady, patient and prudent approach” was realistic. “Any constitutional evolution will happen in phases, not as a . . . Big Bang,” he said.

Celeste Roche, 41, one of the few attendees not already convinced about reunification, left the conference in pensive mood. “My view was that things seemed to be OK [as they are],” she said. “This has made me a lot less sure.” Text size An Apple store. Dan Kitwood/Getty Images Oregon’s public pension recently made big changes in some of its biggest{...}

Twitter employees who were laid off over the past 24 hours aren’t leaving quietly.  “Last Thursday in the SF office,{...}