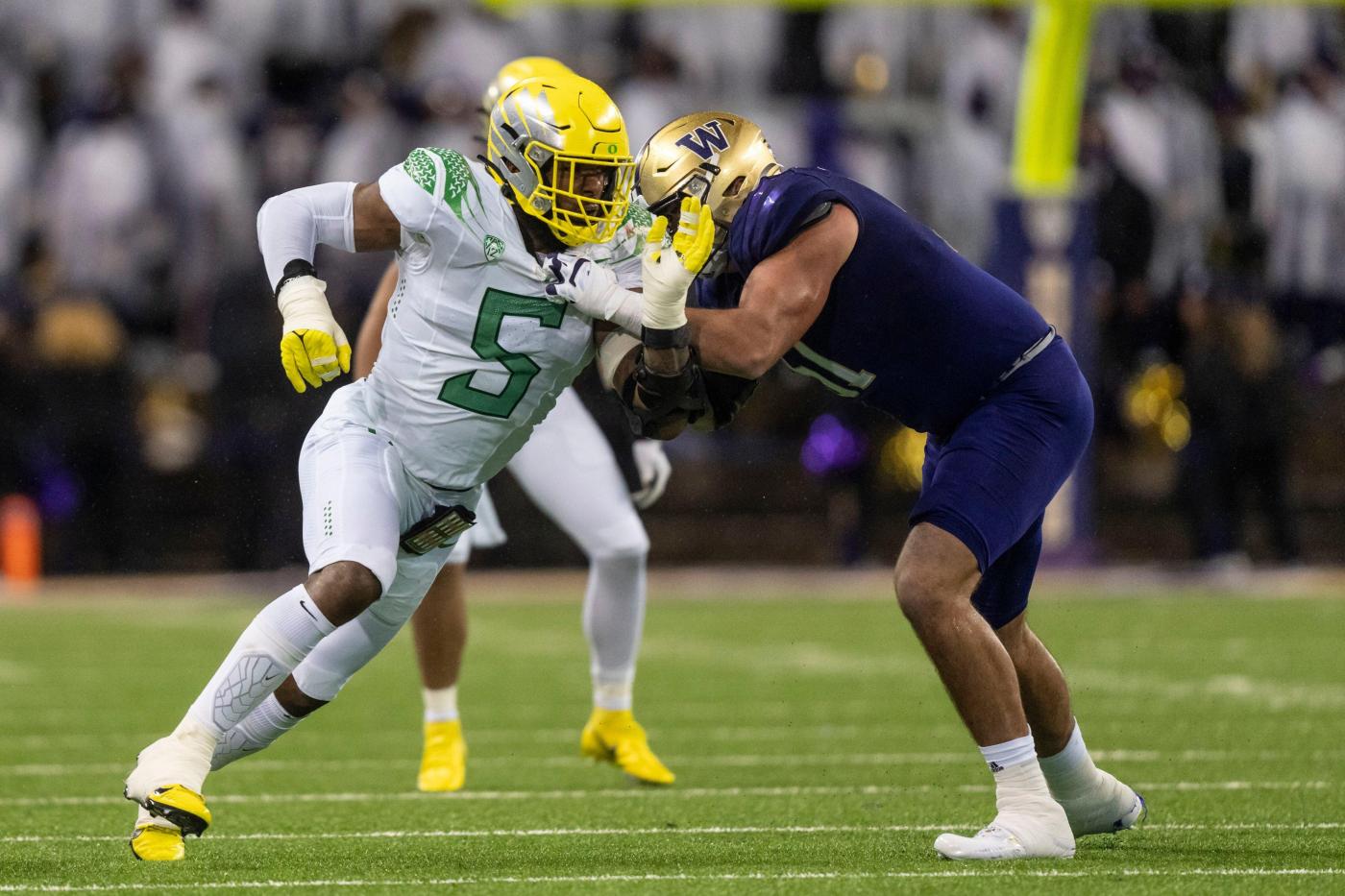 That’s the question the Jets are likely to face in the NFL draft when they go in search of much-needed help at edge rusher.

With Michigan’s star Aidan Hutchinson and Georgia’s physically gifted Travon Walker expected to go in the top three on April 28, the projected edge rusher available with the No. 4 pick will be Johnson or Thibodeaux.

Who’s better? The fan-favorite is Thibodeaux in a landslide. Some media pundits even make the case that Thibodeaux is the best rusher with the most upside in the 2022 draft class. Or at a bare minimum in the top two behind Hutchinson.

To make sense of the decision the Jets need to make if they go edge with their first first-round pick next week, the Daily News spoke to former Jets GM Mike Tannenbaum, along with two scouts and a league executive.

Tannenbaum, who was the Jets’ GM from 2006 until 2012, rated Johnson as his No. 2 edge rusher in this class after Hutchinson.

“I just really fell in love with him in Mobile,” Tannenbaum said of Senior Bowl in February. “I like his play strength. I liked his ability to set the edge and play with strain and power. ”

A national scout viewed it as a coin flip, while an area scout thinks Thibodeaux could have a better start to his career but believes Johnson will be better in the long run.

“Going into the process, Thibodeaux was definitely the higher-ranked guy between those two,” the league exec said. “I think some of that is just predicated on past production. And some of that is the media as well. But then when you really lined the two guys up and watched their film, Jermaine Johnson’s tape is probably better. ”

The 6-5, 260-pounder wrecked offensive gameplans last season at Florida State. He finished with 17.5 tackles for loss with 11.5 sacks and netted ACC Defensive Player of the Year honors.

To become a great pass rusher in the NFL prospects must possess a variety of moves to reach the QB. They need the full arsenal of speed, spin and power moves.

The experts The News spoke with say Johnson displayed the full complement of those abilities in 2021 with the Seminoles.

“I do think Jermaine does a better job with his arsenal,” the area scout said. “He has more of a plan of attack. He’s a little bit more cerebral, trying to set guys up as you get longer in the game. ”

Thibodeaux did not show the same variety of pass rush moves in the experts’ eyes, but that did not dissuade them from acknowledging his explosive talent.

The 6-4 254-pound DE out of Oregon was the consensus No. 1 recruit of the 2019 class and lived up to the billing throughout his three seasons in Eugene.

Thibodeaux flashed a tremendous first step to dash past PAC-12 offensive tackles as he totaled 19 sacks and 35.5 tackles for loss with three forced fumbles during his career at Oregon.

“He plays with tremendous leverage for a guy who’s so tall. He plays with his back flat when he gets off the ball. His closing speed to the top of his route is pretty impressive, ”the national scout said. “He’s not a loose Myles Garret type pass rusher, but he’s powerful and he’s long, he’s aggressive.

“He has a pretty good sense for the pocket and when to collapse. He has the ability to put a rush plan together which is pretty good for a kid coming out of college. ”

“He’s your prototypical looking pass rusher,” Tannenbaum added. “He’s athletic, he can bend. I mean, you can not really draw him up much better than the way he looks. ”

The experts raved about Thibodeaux’s ability to defend the run as he utilizes his hands well to control blockers.

“He plays with his eyes and he plays with his hands. And what I mean by that is he engages with offensive lineman with his two hands already extended, keeping them away from his body, ”the area scout said. “The first time I saw him set the edge and control the blocker I said, ‘Damn, how strong is this [expletive]’? ”

One main concern was Thibodeaux’s lack of pass rush moves.

“I do think some of his [hip] stiffness is going to prevent him from being fluid, transitioning one move to another, ”the national scout said. “Therefore, when he’s playing better tackles that are stronger, longer, just as athletically gifted as him, I do think he may face some trouble there.”

“He’s really good at one thing, he should become really really good at that one thing,” the national scout added. “He can be a pretty good power rusher. Keep getting stronger. He’s so young. Like he gets older, he should just continue to perfect using his hand and his leverage. Every pass rusher that’s prolific isn’t loosey-goosey. They’re not all fluid. Some of them are just big, powerful, mean and strong. ”

As for Johnson, the big concern is he just a one-year wonder? He did not perform until his last year. Johnson was a late bloomer when he started his collegiate career at a Junior College before transferring to Georgia. He finished with 6.5 sacks in 20 games during his two-year stint with the Bulldogs before transferring to Florida State where he exploded in his final year.

The experts do not believe either one will become transcendent 15-plus sack superstars, but believe they’ll become good pros who can get double-digit sacks.

Either option would deliver a big boost of talent to Gang Green’s defense.