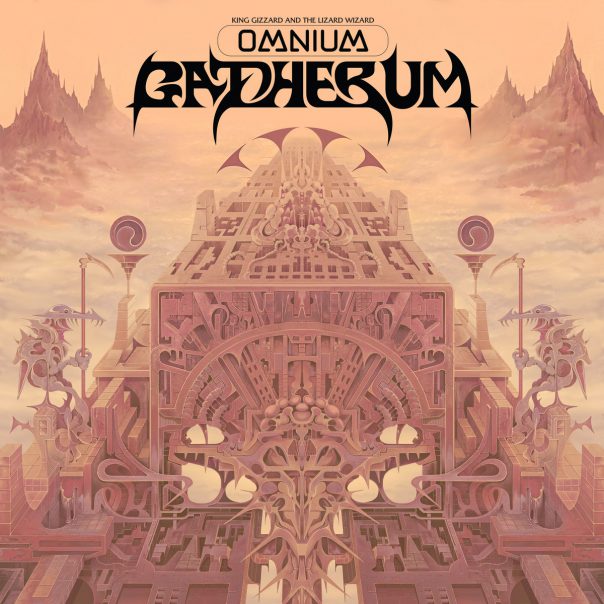 King Gizzard & The Lizard Wizard continue their usual pattern of 90-degree sonic turns with their latest release, Omnium Gatherium. Almost shockingly, it’s their 19th studio album in just under a decade as a group. After having to write and record separately for the last two years—they’ve released three albums since lockdown began—the band is finally back together physically and has created an album that contains a plethora of new musical ideas. So many ideas, in fact, that a double album was needed to fit in all 16 songs.

While the album might not innovate within the overall musical world as King Gizz has done before, Omnium Gatherium nonetheless marks a strong shift in songwriting styles for the band.

The first track is “The Dripping Tap,” an 18-minute jam the likes of which has never been attempted on any KGLW studio album. It encompasses themes of environmentalism, which on the other hand, is a common occurrence in their music. Despite the dizzying stretch of the opener, the following songs are a much more typical length.

The next longest, “Evilest Man,” clocks in at just over seven and a half minutes, beginning with a swirling guitar while the vocals remain soft as the band sings of misinformation and tabloids. The track doesn’t shy from political jabs with lyrics like, “We’re in his conservative lair/ I wonder if he knows this song.” That assertion comes just ahead of an enthusiastic two-minute outro.

The most surprising addition to the King Gizzard & The Lizard Wizard sound comes in the form of various hip-hop production techniques. This can be heard most notably in the addition of sampling and rapping by vocalist and multi-instrumentalist Ambrose Kenny-Smith. Still, the band’s various exploratory sounds are here, with elements of Butterfly 3000 and 2019’s Infest the Rats’ Nest. Where Omnium Gatherium differs is in how extremely varied the songwriting credits are. Every member but one logged multiple credits. Usually, Stu Mackenzie and Kenny-Smith dominate the songwriting.

One of the strongest songs on the album is “Kepler-22b,” named for the planet that’s raised eyebrows over its potential to hold water. It is, in a way, the most unconventional track the band has recorded thus far; a sampled jazz piano track dances alongside some of the band’s best drumming. Additionally, the bass line creates an amazing countermelody with the aforementioned piano. As King Gizz gaze off into space through a telescope, the first thing they notice on Kepler-22b is another telescope looking back at them.

The album is victim to a common trap with the double album format. It falls into the awkward middle ground of too much good content to fit on one album, but not enough to fill a second. As such, the second half of the album has more than its share of filler and, in some cases, underdeveloped songs.

These include “Blame it on the Weather,” which is largely just a few chords with little in terms of sonic variety, save for the lyrics and a short guitar solo; as well as the closing track, “The Funeral,” which is a single line of lyrics repeated over an uninteresting chord progression containing little of King Gizz’s signature energy

There are also many ideas that seem to be executed more than once, leading to multiple songs charting the same sonic territory. While not a crippling problem, it’s definitely noticeable and a bit distracting. There’s “Predator X,” where rough, growling vocals match that of the guitar playing, but unfortunately, it’s remarkably similar to “Gaia,” which came much earlier in the album. Or take lead single “Magenta Mountain,” with its bedroom-pop energy. On an album with so much breadth, the bopping, poppy beat of the second to last song, “Candles,” sounds similar to the former and fails to hit as hard.

Ultimately, Omnium Gatherium has some of the strongest tracks the band has written. It’s also arguably the band’s best-produced album. Its sound is unusually crisp with the instruments all ringing clear yet managing to not drown one another out. But what could have been an exemplary conventional album becomes bloated and stretched a bit too thin. King Gizzard & The Lizard Wizard have always experimented and this time it’s no different. In this case, too much of a good thing can weigh you down. But not too much.