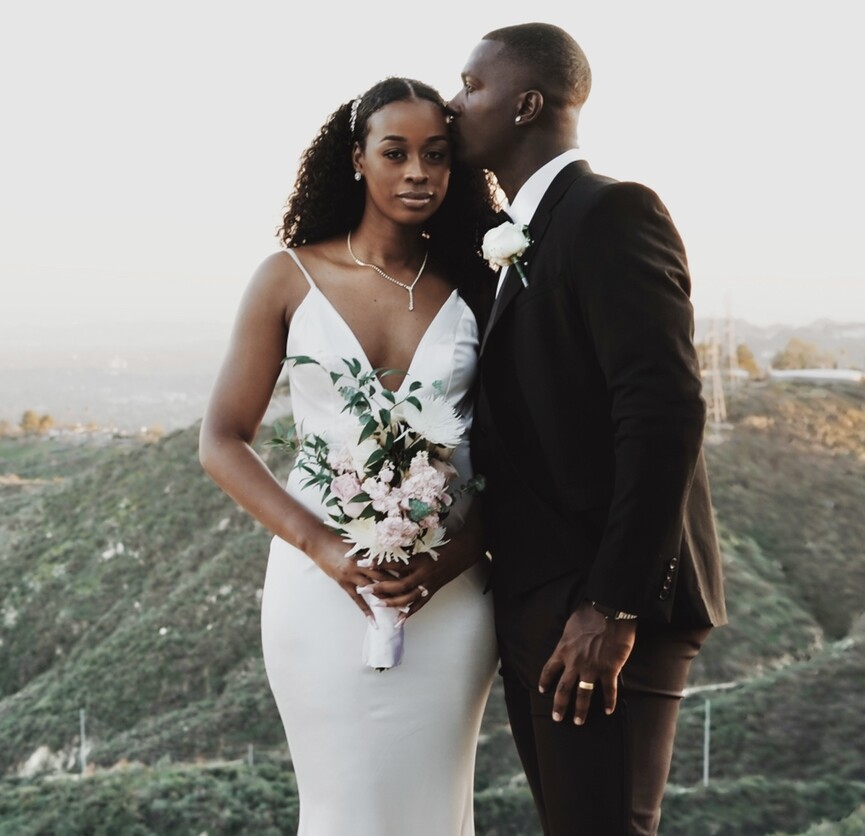 It was the wedding that went viral and cost less than a used car.

Joel and Kiara Brokenbrough did not want to go into debt by tying the knot, so they got creative planning their February wedding on a scenic turnoff on Angeles Crest Highway.

The Brokenbroughs spent about $ 500 on their wedding, including $ 42 for Kiara’s dress and $ 100 for Joel’s suit. The wedding party at the ceremony was less than 30 people, so they did not require a permit to congregate on the side of the road. The couple did not break the bank with their reception either, because guests paid for their own food and drinks.

Family and friends helped pay for some costs, but overall, Kiara said, it was her plan to have not a dream wedding, but one done with the available resources.

“We knew it would not be wise for us to go into debt over a wedding or to spend a lot of money just to have a wedding,” Kiara said.

Even the dress will live to see another day. Kiara, 28, plans to cut a slit into the gown and use it again.

“I just seen how, culturally, how we’ve gotten so far away from how weddings were something so simple as bride and groom coming together, bowing to God to stay together and bowing to each other to stay together and in front of witnesses, Kiara told The Times. “I’m not going to go into debt over this. I’m not going to spend a whole bunch of money, or stress and get in people’s pockets over such an event that’s going to last one day. “

According to the Knot, an online wedding publication, the average cost for a wedding in 2021 was $ 28,000, roughly the same as in 2019. But in 2020, the cost was $ 19,000, because the pandemic forced weddings to downsize. For Kiara, who works as a social media manager for multiple clients, that seemed like an appealing idea.

“I was seeing other people getting married in nontraditional ways, and I fell in love with it,” Kiara said.

Stretching their dollar was key for Kiara and Joel, 30, who works as a high school basketball and physical education coach.

During the pandemic, millennials such as the Brokenbroughs were the most likely generation to have more credit card debt than savings, according to a recent report from consumer financial company Bankrate, with 32% of millennials in such a situation.

For Kiara, the hope was not to start her marriage in the red.

Over a series of videos, Kiara invites viewers into her and Joel’s small apartment and their trip to get a marriage license. She narrates her decision to buy a budget dress, and there’s some of the usual stress that comes from planning a wedding.

In one video, Joel talks to the camera on their wedding day: “I do not even know how I feel. Honestly, I do not know how to feel. Truth be told, it feels like we’ve been married. We’re just officially tying the knot. ”

While Kiara considers herself a social media influencer in the making, she did not want to perform as someone else for her own wedding.

“I wanted to look like myself and be myself,” Kiara said. “I’m just not trying to transform into this whole new woman for a few hours.”