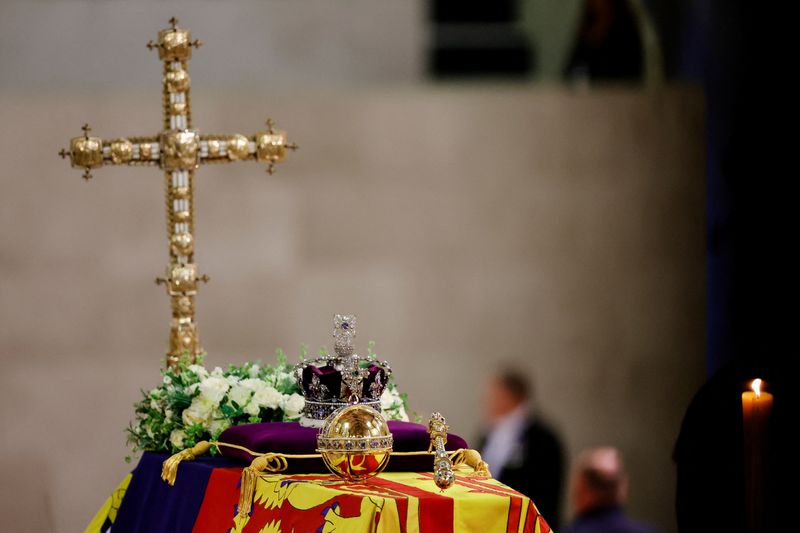 © Reuters. A view of Queen Elizabeth’s coffin, draped in the Royal Standard, with the Imperial State Crown and flowers on top, following her death, during her lying-in-state at Westminster Hall, in London, Britain, September 18, 2022. REUTERS/Sarah Meyssonnier/Pool

LONDON (Reuters) -Leaders and monarchs from around the world gathered in London on Monday to bid farewell to Queen Elizabeth at a state funeral of inimitable pageantry, marking the passing of a beloved figure who helped unify the nation through her 70-year reign.

Hundreds of thousands of people queued to file past the casket of Britain’s longest-reigning monarch at London’s historic Westminster Hall during her lying-in-state, and thousands more lined the streets to witness a sombre display of royal pomp.

They, like many across the globe including U.S. President Joe Biden, came to pay tribute to the 96-year-old who earned respect for her sense of duty and represented a constant as Britain’s role in the world diminished and changed.

“You were fortunate to have had her for 70 years,” Biden said. “We all were.”

Shortly before 11 a.m., the oak coffin, covered in the Royal Standard flag with the Imperial State Crown on top, will be placed on a gun carriage and pulled by naval personnel to Westminster Abbey for her funeral https://www.reuters.com/world/uk/plans-queen-elizabeths-state-funeral-2022-09-15/.

Among the 2,000 in the congregation will be some 500 world leaders https://www.reuters.com/world/uk/world-leaders-come-london-queen-elizabeths-funeral-2022-09-12/, from Biden and Emperor Naruhito of Japan to South African President Cyril Ramaphosa and Mark Brown, prime minister of Cook Islands.

The queen’s great-grandchildren, Prince George, 9, and Princess Charlotte, 7, the two eldest children of now heir to the throne Prince William, will also be attending.

“Over the last 10 days, my wife and I have been so deeply touched by the many messages of condolence and support we have received from this country and across the world,” Charles, Elizabeth’s son and the new king, said in a statement.

“As we all prepare to say our last farewell, I wanted simply to take this opportunity to say thank you to all those countless people who have been such a support and comfort to my family and myself in this time of grief.”

Her health had been in decline, and for months the monarch who had carried out hundreds of official engagements well into her 90s had withdrawn from public life.

However, just two days before her death she had appointed Liz Truss her 15th and final prime minister.

Such was her longevity and her inextricable link with Britain that even her own family found her passing a shock.

“We all thought she was invincible,” Prince William told well-wishers.

The 40th sovereign in a line that traces its lineage back to 1066, Elizabeth came to the throne in 1952, Britain’s first post-imperial monarch.

She oversaw her nation trying to carve out a new place in the world, and she was instrumental in the emergence of the Commonwealth of Nations, now a grouping comprising 56 countries.

When she succeeded her father George VI, Winston Churchill was her first prime minister and Josef Stalin led the Soviet Union. She met major figures from politics to entertainment and sport including Nelson Mandela, Pope John Paul II, the Beatles, Marilyn Monroe, Pele and Roger Federer.

Despite being reputedly just 5ft 3ins (1.6m) tall, she dominated rooms with her presence and became a towering global figure, praised in death from Paris and Washington to Moscow and Beijing. National mourning was observed in Brazil, Jordan and Cuba, countries with which she had little direct link.

“Queen Elizabeth II was without any shadow of a doubt the best known figure in the world, the most photographed person in history, the most recognisable person, and the fact that world leaders are going to be pouring into London for the funeral … is saying a lot about this iconic figure,” historian Anthony Seldon told Reuters.

Transport chiefs said one million people were expected in central London for the funeral, while police say it would be the biggest security operation ever in the capital.

The crowds came from across Britain and beyond.

Some wore smart black suits and dresses. Others were dressed in hoodies, leggings and tracksuits. A woman with dyed green hair stood next to a man wearing a morning suit as they waited for the procession to begin.

Alistair Campbell Binnings, 64, said he left his home in Norfolk at midnight to make his way to London.

He added that he had not been to a royal wedding or funeral before, but felt compelled to be in the capital for the funeral.

“This is a one-off. We would only be here for the queen. We just felt we had to be here. She was what we always needed in a time of crisis,” he said.

King Charles, his siblings and sons Princes William and Harry and other members of the Windsor family will slowly walk behind the coffin as it is taken on the gun carriage to Westminster Abbey, led by some 200 pipers and drummers.

The tenor bell of the Abbey – the site of coronations, weddings and burials of English and then British kings and queens for almost 1,000 years – will toll 96 times.

“Here, where Queen Elizabeth was married and crowned, we gather from across the nation, from the Commonwealth, and from the nations of the world, to mourn our loss, to remember her long life of selfless service,” David Hoyle, the Dean of Westminster will say.

In addition to dignitaries, the congregation will include those awarded Britain’s highest military and civilian medals for gallantry, representatives from charities supported by the queen, and those who made “extraordinary contributions” to dealing with the COVID-19 pandemic.

Tens of millions in Britain and abroad are expected to watch the funeral of the monarch, something which has never been televised before https://www.reuters.com/world/uk/over-100-british-cinemas-big-city-screens-show-queens-funeral-2022-09-17/. It will end with the Last Post trumpet salute before the church and the nation falls silent for two minutes.

Afterwards, the coffin will be brought through central London, past the queen’s Buckingham Palace home to the Wellington Arch at Hyde Park Corner, with the monarch and the royal family following again on foot during the 1.5 mile (2.4 km) procession.

From there, it will be placed on a hearse to be driven to Windsor Castle, west of London, for a service at St. George’s Chapel. This will conclude with the crown, orb and sceptre – symbols of the monarch’s power and governance – being removed from the coffin and placed on the altar.

The Lord Chamberlain, the most senior official in the royal household, will break his ‘Wand of Office’, signifying the end of his service to the sovereign, and place it on the casket.

It will then be lowered into the royal vault as the Sovereign’s Piper plays a lament, slowly walking away until music in the chapel gradually fades.

Later in the evening, in a private family service, the coffin of Elizabeth and her husband of more than seven decades Prince Philip, who died last year aged 99, will be buried together at the King George VI Memorial Chapel, where her parents and sister, Princess Margaret, also rest.

“We’re so happy you’re back with Grandpa. Goodbye dear grannie, it has been the honour of our lives to have been your granddaughters and we’re so very proud of you,” grandchildren Princesses Beatrice and Eugenie said https://www.reuters.com/world/uk/dearest-grannie-we-miss-you-queen-elizabeths-grandchildren-2022-09-17/. 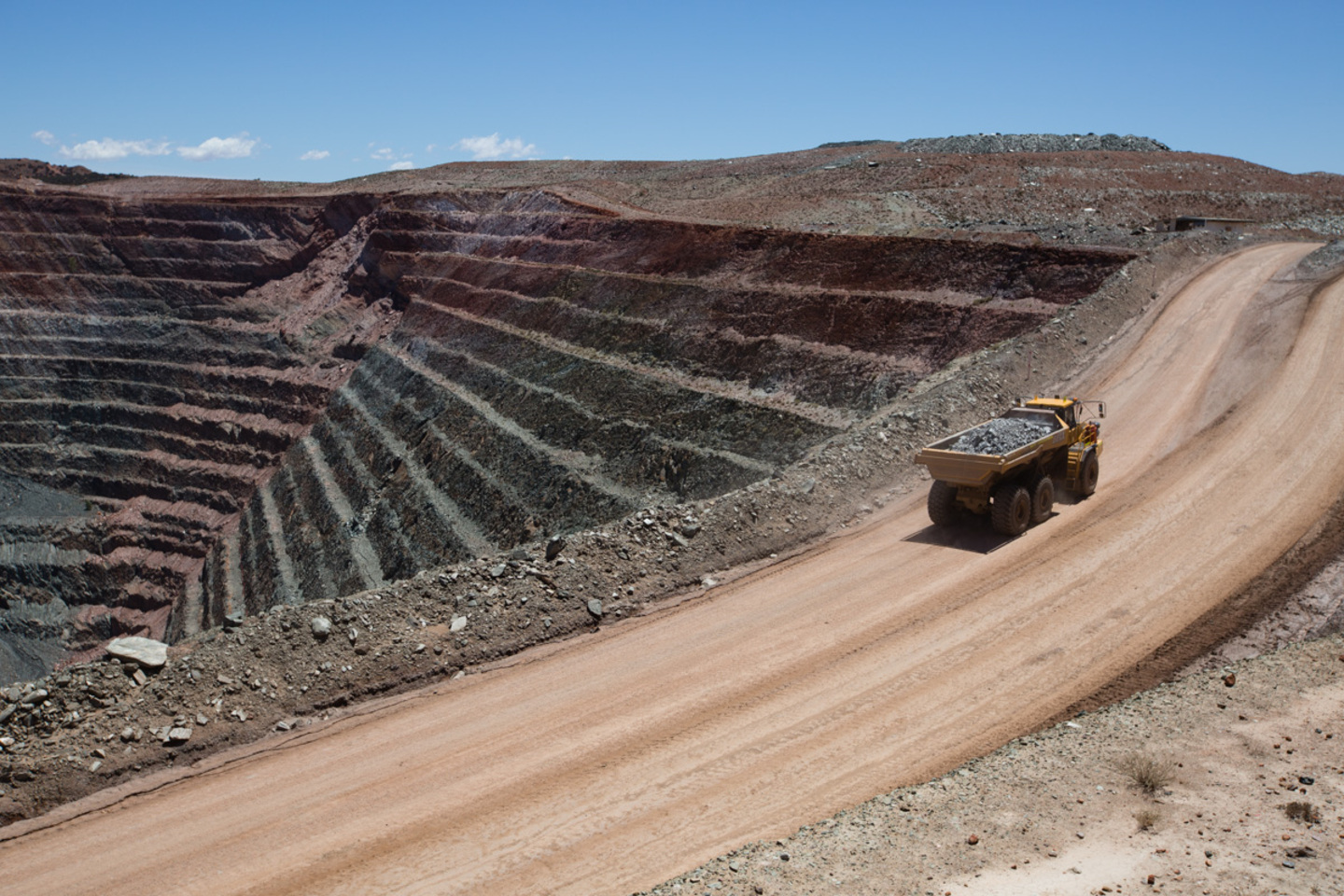 Keen to leave a rocky Fy22 behind, St Barbara is leveraging its Leonora gold assets as central to any consolidation{...} 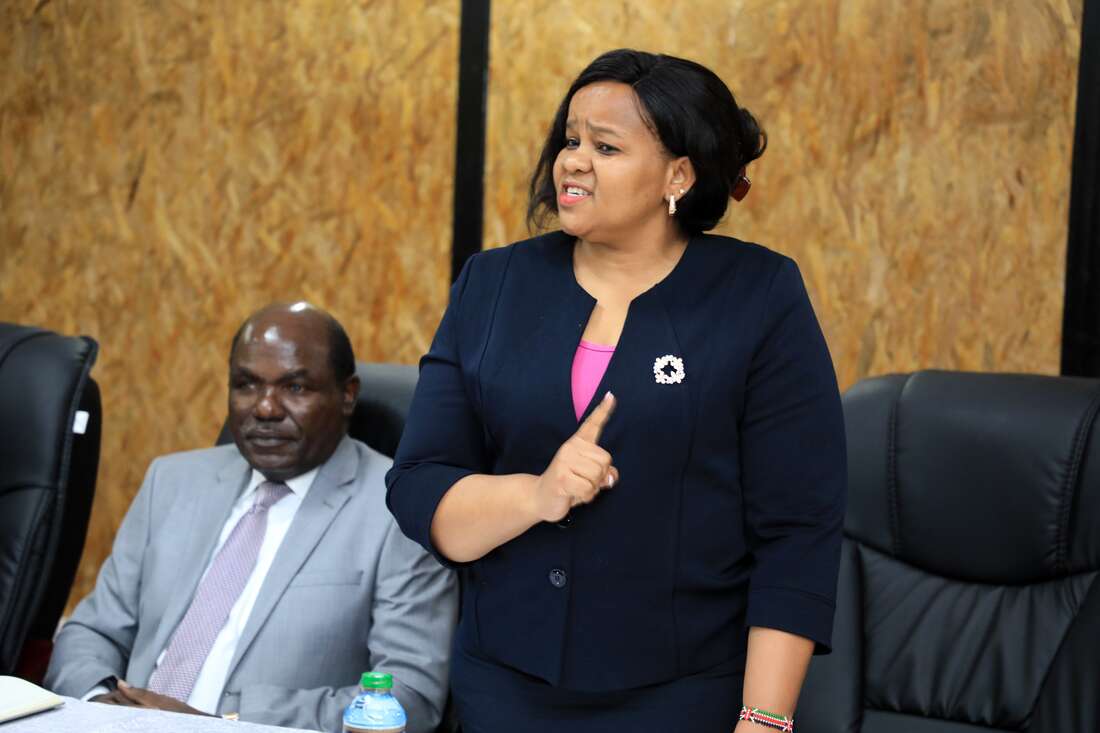 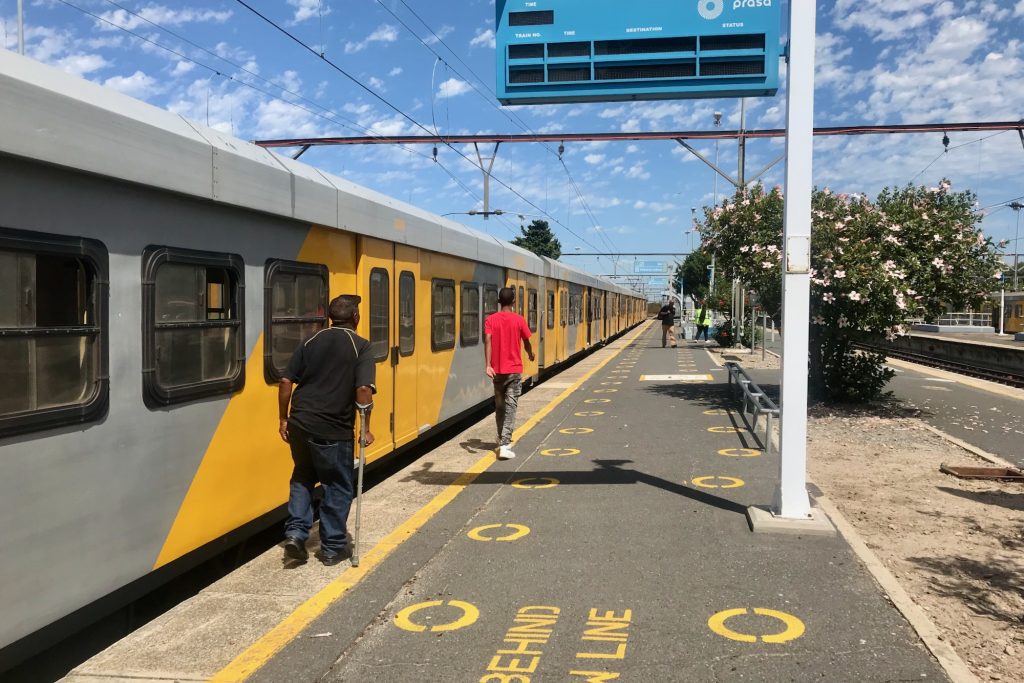 On Monday, Metrorail resumed a limited service between Eerste River and Bellville. The service had been suspended since the first{...}