Legacies certainly lived up to its name on Thursday, taking viewers back to New Orleans for a bittersweet reunion with characters we’ve known for more than a decade.

Thanks to a bit of astral projection, Hope suddenly found herself in the Big Easy, where all of Klaus’ living siblings had come to pay their respects. That’s right, as if the show’s biggest Mikaelson gathering to date wasn’t guaranteed to make us emotional enough, Legacies then sucker punched our hearts with an invitation to Klaus’ funeral. Mission accomplished, heartbreak achieved.

But the show wasn’t done ripping us to pieces, not even close. Rebekah explained that Freya used magic to “Humpty Dumpty” Klaus’ ashes back together, then placed them in an urn donning his iconic necklace. And who was given the honor of selecting Klaus’ final resting place? Why, his daughter, of course.

With first-time Legacies visitors Marcel and Kol (and Percival!) thrown into the mix, it was a gut-wrenching hour, a celebration of everything this family has been through… and a cautionary tale of what will happen if Hope doesn’t restore her humanity ASAP. 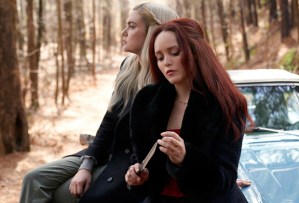 Before we break down everything we learned about the Mikaelson clan, here’s a quick recap of what everyone else got up to this week:

* Lizzie and Aurora formed a temporary alliance with Ben, but when Jen warned them that her half-brother would do anything to get Ashur back, including waking their hot-but-evil father (which he is doing!), Lizzie had the distinct feeling that she screwed up. This brought her back to the Salvatore School, albeit not under the happiest of circumstances.

* Kaleb treated Cleo to a pancake-filled getaway in Atlanta, where he also hoped to figure out what was happening to her powers. What they got was a horrifying vision of the future, complete with the destruction of Mystic Falls. Her conclusion? They need to stop those gods from coming. Too bad the episode literally ended with Ben releasing his aforementioned hot-but-evil father.

Grade the episode below, then read on for all of the updates we got about the Mikaelson family, including commentary courtesy of TVLine’s chat with Charles Michael Davis.