By Claudia Aoraha For Mailonline

A London double-decker bus has burst into flames as horrified onlookers watched the fireball erupt on the streets of south London.

Passengers and the driver of the bus fled for their lives after it was engulfed in roaring flames in Streatham Hill near Brixton.

Black smoke could be seen bellowing from the double-decker after it arrived at a bus stop just before 10am.

Flames erupted at the back of the vehicle while parts of the bus, which were burning in the inferno, ‘crashed’ to the ground.

Horrified witnesses said that the dramatic fire started ‘promptly’ after the bus pulled into the stop on Christchurch Road. 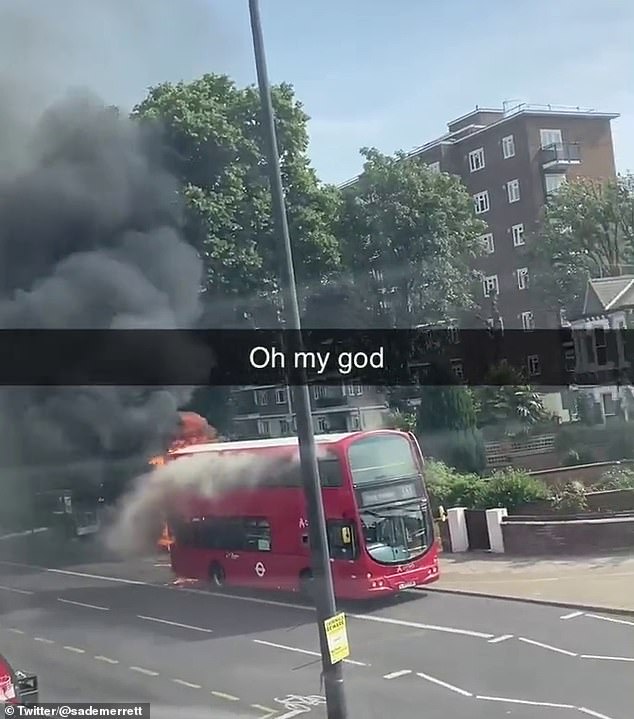 Flames erupted at the back of the vehicle while parts of the bus, which were burning in the inferno, ‘crashed’ to the ground

One shocked witness posted an image on Twitter, with the caption: ‘Well this is frightening!

‘Bus in Brixton pulled into the stop and promptly caught on fire. Huge flames & crashing as bits of it were burned off.’

It’s not clear how many people were on the double-decker bus when it burst into flames.

There were no reports of any injuries, firefighters confirmed.

London Fire Brigade confirmed to MailOnline that a team rushed to the site of the fire on Christchurch Road, after receiving a call around 9.50am this morning.

They said in a statement: ‘Firefighters were called to a bus alight on Christchurch Road in Streatham Hill.

‘Part of a double decker bus was damaged by fire. The driver and passengers left the bus before the Brigade arrived. There were no reports of any injuries.

‘The Brigade’s 999 Control Officers took 19 calls to the blaze.

‘The Brigade was called at 0950 and the fire was under control by 1022. One fire engine from Brixton Fire Station attended the scene.’

Dramatic images in aftermath of the fire show the blackened bus partly gutted from the back.

Laurence Nealon, 28, from Brixton, said: ‘I was in a work meeting when I noticed the smoke going past my window.

‘I popped downstairs with my housemates to see what was going on and was shocked to see the blaze.

‘There was some murmur that the bus would explode and caused a bit of anxiety but it quickly transpired it didn’t.

‘As soon as the fire brigade arrived it was speedily taken care of.

‘It’s the last thing you expect to see when you’re working from home in the morning.’ 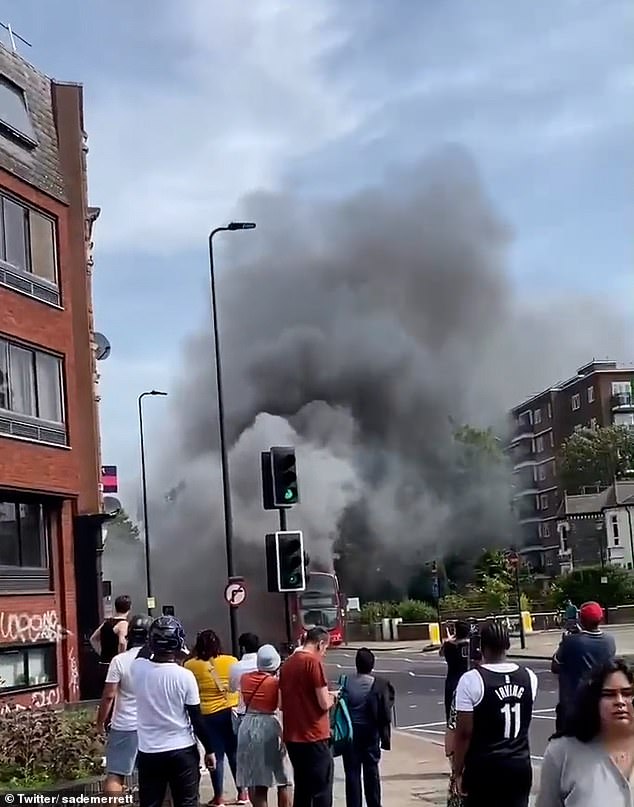