A man accused of fatally pushing a woman in front of a New York City subway train earlier this year will be sent to a secure psychiatric facility after prosecutors told a judge on Tuesday they would not challenge a medical evaluation that found him unfit to face trial.

Martial Simon, 61, had been charged with second-degree murder in the death of Michelle Go, 40, at the Times Square subway station on January 15.

Two court-appointed psychiatrists agreed Simon was not competent to face trial last week after examining him at Bellevue Hospital Center, where he had been held since his arrest in January, according to his lawyer, Mitchell Schumann.

He has been released into the custody of the Department of Mental Health and Hygiene until he can be deemed fit for trial, suspending his case until further notice, ABC 7 reported. 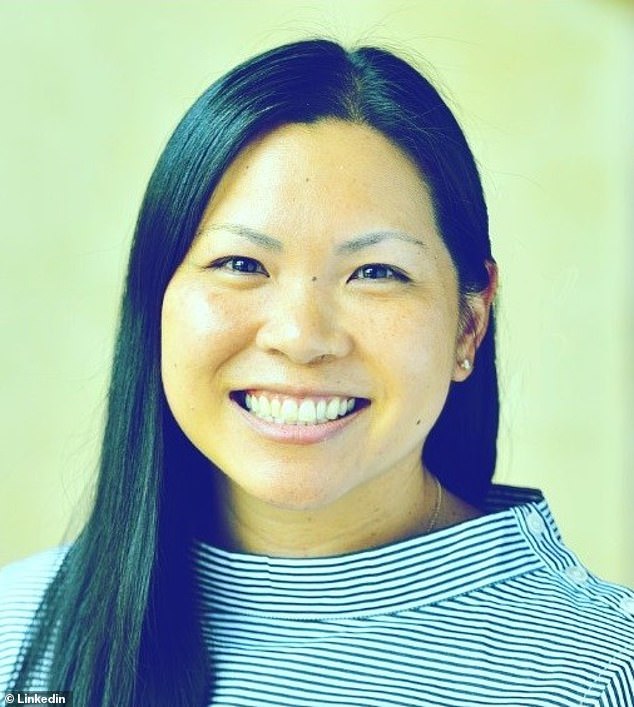 Michelle Go, 40, was killed after being pushed by Martial Simon, 61, who is homeless 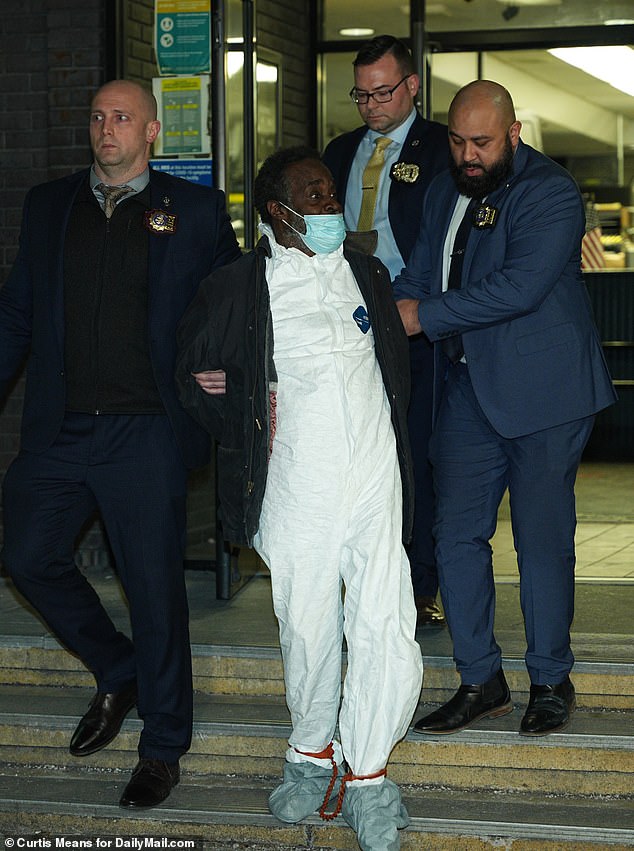 Martial (pictured in January) will not face trial after two court-appointed psychiatrists stand he was unfit to. He will be at a psychiatric facility, where he will stay until he is deemed fit for trial 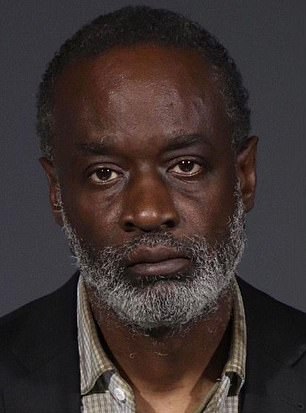 At a brief hearing on Tuesday, prosecutors from the Manhattan District Attorney’s, told the court they agreed to let Simon be confined to a psychiatric institution until he was fit for trial, if ever that day came, Schumann said. The lawyer believes Simon will be transferred to Kirby Forensic Psychiatric Center on Wards Island, near Manhattan, or to Mid-Hudson Forensic Psychiatric Center, which is 65 miles away from the city.

The attack also drew fresh scrutiny to the shortcomings in mental health services in New York, particularly for poor and homeless people. Earlier this month, state lawmakers expanded a law that lets judges mandate mental health treatment or confinement to a psychiatric institution if, among other criteria, they are found to be a danger to others.

Simon had been the manager of a Manhattan parking garage until his 30s, when he was first diagnosed with schizophrenia and became unemployed and homeless, Schumann said. In 2017, he was convicted of trying to rob a taxi driver and was out on parole; a drug possession charge against Simon in 2019 was also dropped because he was found unfit for trial, Schumann said.

Also in 2017, Simon reportedly told a psychiatrist at a state-run hospital that it was only a matter of time before he pushed someone on the tracks, he was released, according to The New York Times. 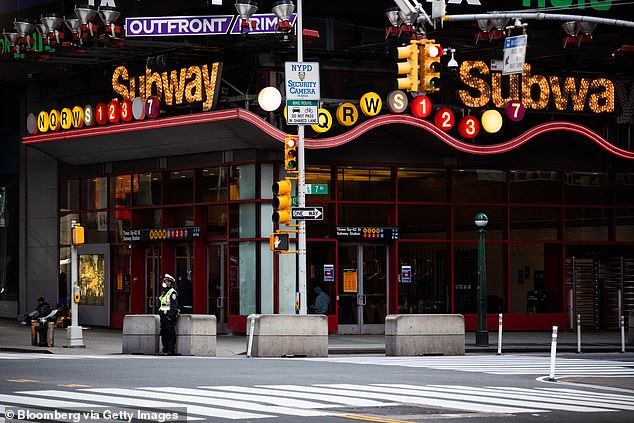 ‘I think it’s hard to argue that the system has not failed him and he’s left untreated on the street,’ Schumann said.

Police said Schumann had harassed several other commuters that day and did not appear to target Go, who worked at Deloitte, because she was an Asian American. But her murder shook many Asian Americans, who have reported a rise in racist attacks across the country.

The Metropolitan Transportation Authority says serious crime remains rare on the subway, one of the largest in the world with more than three million trips taken on the average weekday this year. Police data shows felony crimes are down compared to early 2020, before COVID-19 surged in New York.

Go’s murder unnerved New Yorkers amid a rise in violent crimes across the United States since the start of the COVID-19 pandemic, and prompted the transit authority to announce it would try installing safety barriers on some platforms.

However, Lieber has ruled out platform barriers as part of the MTA’s current $ 51.5 billion capital improvement plan for now, since ‘a lot of stations’ do not have the proper engineering for the sliding doors to work.

He further explained that the three stations were selected for the experiment because they could support technology for the barriers – sliding doors between the platform and the tracks that open when the subway arrives. 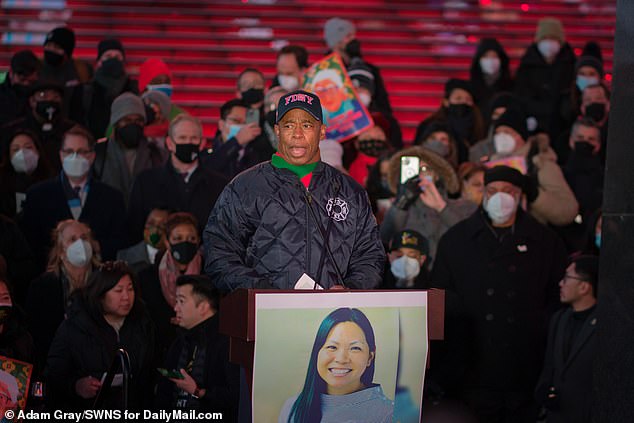 NYC Mayor Eric Adams, 61, spoke at her vigil (pictured) and said the city could not go back to being filled with violent crime. Crime has only continued to rise since Go’s death

He did not disclose the cost of the pilot program and there is no timeline for it. But a 3,000-page MTA report from 2019 found the barrier doors could work only at 128 stations – roughly a quarter of the 472 stops in the system – and would cost $ 7billion.

The limited number of stations is due to station structure, the design of subway cars and the need for wheelchair access.

In addition, both NYC Mayor Eric Adams, 61, and Governor Kathy Hochul, 63, said they would help increase safety for New Yorkers through homeless outreach programs and upping police presence in subways.

‘Swearing and committed that we would never go back.’ 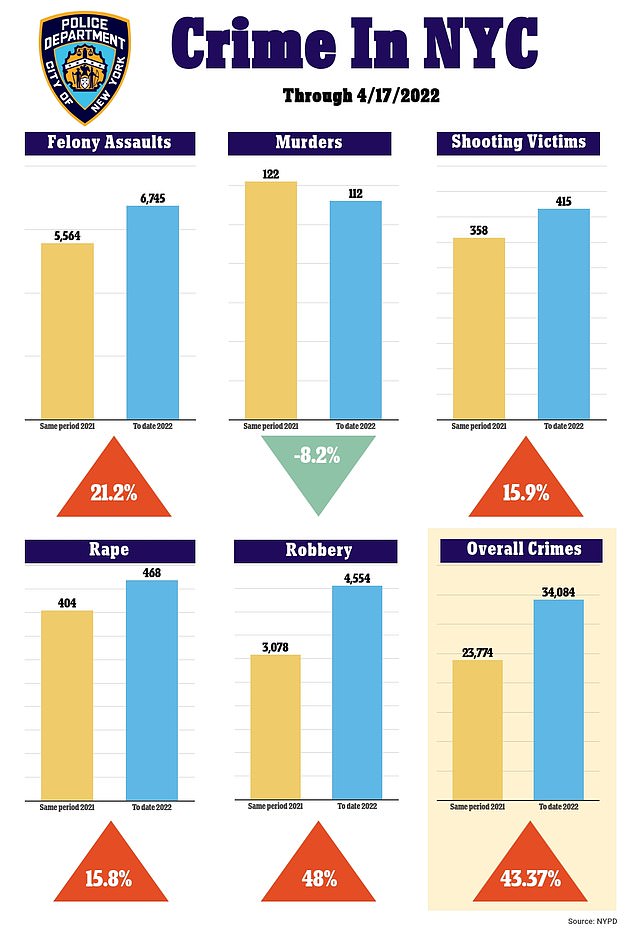 Transit crimes are up 66 percent and overall crime is up nearly 50 percent in the city, as of April 17

Since Go’s death, violence on the subway has only gone up. As of April 17, New Yorkers have experienced nearly 400 transit crimes.

Earlier this month, NYC experienced the first mass shooting on the subway in decades, wounding 10 and injuring dozens after Frank James, 62, got on an N train in Brooklyn and began setting off smoke bombs and shooting more than 30 rounds once the subway car doors closed during morning rush hour.