Over the last month or so, the Catalan press has repeatedly stressed that Manchester City’s Raheem Sterling is a January target for Barcelona.

A handful of reports even indicated that the winger is open to the idea of ​​moving to Camp Nou if the La Liga team can find a deal with the English champions.

The 26-year-old has seen his playing time limited and has only managed three league starts for City this season.

Wednesday’s edition of Mundo Deportivo says the player ‘has not taken’ the substitute role at Etihad ‘very well’.

New manager Xavi Hernández wants a winger in the winter market to match his 4-3-3 formation. The English national team player is first on the list, but there are ‘difficulties involved’ in getting him to Barcelona.

The Spanish giants have to relieve some of their own players in order to lower their salary budget before embarking on the former Liverpool star.

As Sterling is no longer a regular starter under Guardiola, Mundo Deportivo says City are willing to let him out in January, provided they sign a replacement first. 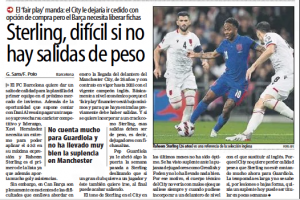 Premier League winners want to keep ‘quality’ high in the squad and let Sterling leave the club without picking up a new striker will see them ‘tap quality’.

These are the factors that make it difficult for Barcelona to pick up Sterling in the next window.