For the past couple of months, the stories regarding Sergej Milinković-Savić and a transfer to Manchester United have been almost relentless.

It all comes down to Paul Pogba, and the fact that his contract with the Old Trafford side comes to an end in the summer.

Should he not renew, a move for the Serbian would make sense, and that’s why the Italian newspapers are primarily sending him to Manchester United, even if other clubs, like Paris Saint-Germain, are also said to be keen.

Il Tempo are one of those on Wednesday, looking at what could happen at Lazio in the coming months, where Maurizio Sarri wants to revamp his squad in the summer transfer window.

That will take money, which a Milinković-Savić sale will provide, but it’s all about finding the right club for both the Serie A side to maximize their income and the player to make the ideal next step in his career. 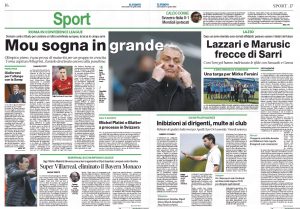 When it comes to the Serbian, Il Tempo explains that ‘Juventus’ assault continues even if the offers from Paris Saint-Germain and Manchester United are superior’.

That’s a boost for the Red Devils in their chase, but a lot could now come down to Erik ten Hag, who appears set to be the next manager at Old Trafford.

If the Dutchman does not want Milinković-Savić in his squad, then perhaps we could see Manchester United move onto other targets.

If he does, however, then there’s a good chance the club will go all out for him to replace Pogba.