Towards the end of the summer 2020 window, Manchester United were reportedly eager to sign Ousmane Dembélé, but a deal never took shape. Since then, they have been regularly named as a suitor for the Barcelona player, whose contract expires in 2022.

On November 26, Mundo Deportivo reported that the winger is ‘one of the main goals’ for the Red Devils next season. Earlier this month, the same newspaper explained that the Old Trafford club has ‘positioned itself’ to pick up the 24-year-old.

Two days ago, we covered claims from Sport that United have the financial resources to bring the French national team player to England.

Dembélé has not signed an extension and in three weeks he will be entitled to negotiate with foreign clubs for a free transfer next summer.

Mundo Deportivo now claim the player’s agent has an offer from United, but he may not yet be convinced to take his client there.

It’s because of Chelsea’s interest and the newspaper says United ‘do not guarantee as much’ as ​​the Blues on several factors. 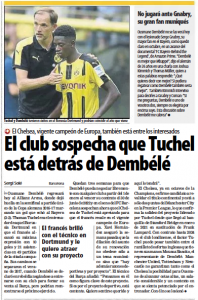 At Manchester United, the Frenchman will face competition from Jadon Sancho, Marcus Rashford, Mason Greenwood and Anthony Martial for a place in the starting line-up. Considering his injury record, he may struggle to ‘reach high levels’ there.

United plan to appoint a permanent manager next summer as they now have Ralf Rangnick as coach until the end of this season. Therefore, it will not be possible for Dembélé to know if he would be wanted by the coach.