A new restaurant in London is always an optimistic thing. The sector is awash with talent and loves to embrace the positive. But opening a restaurant ain’t ever easy, even without Brexit-related staffing issues, a certain virus and the rising cost of… everything. So, what’s it like to jump into the London food pool in 2022?

The one doing modern Malaysian cooking

Chef Abby Lee’s first foray into the restaurant world didn’t have the best timing. She opened in Spitalfields selling salads to city workers just weeks before the first lockdown and was forced to close. Now, she’s dusting herself off and trying again with Mambow at Market Stalls in Peckham. ‘After hitting rock bottom, I went home to Singapore and Malaysia with my tail between my legs and I haven’t been back to see family since before the pandemic,’ she explains. During her time at home she cooked with aunties and grandmas where she found joy in cooking again. ‘I’ve never cooked food from my home culture before and I didn’t believe in what I was doing before. If your heart’s not in it, then what’s the point? I’m glad I failed and had time to reflect.’ This new perspective has nudged her towards showing people that there’s more to Malaysian cuisine than laksa and roti. Lee wants to preserve traditional Malaysian and Nonya recipes, but also put fun spins on dishes like the Hainanese chicken sando and her grandmother’s Sarawak black pepper chicken curry recipe.

The one thing to order? The M Wing is a brined and deep-fried chicken wing in an anchovy sambal. It’s seriously addictive stuff.

The one that has an actual open fire

Fire in the hole, Soho! Firebird is a new flame-flecked small-plates restaurant and natural-wine bar. Founded by restaurateurs Madina Kazhimova and Anna Dolgushina, who run a highly rated pan-Asian eatery in St Petersburg called Wong Kar Wine. For this place, they’re doing things a little differently by opting for a laidback, simple approach to Mediterranean food alongside a dynamic wine selection from small producers. ‘Why not try something new and fun?’ Kazhimova says. ‘Isn’t that what restaurants are all about? We go out so we can laugh eat and drink. Some say the hospitality industry is in a crisis, but for us we see opportunity. Five years ago, the market was so competitive and impossible for a small restaurant like us to compete. Now, we’re ready to jump at that chance.’ Diners will get front-row seats to the action and get a chance to try charred seasonal produce such as rump steak with burnt onions and smoked bone marrow, and roasted duck breast with plum chutney and burnt plums.

The one thing to order? The epic-sounding Firebird Alaska is a flaming baked dessert. Trust us, it’s going to be lit.

The prodigal dumpling one returns east

After years of attracting queues at Spitalfields Market, Chinese street-food stall Dumpling Shack is taking things to the next level with its first permanent sit-down restaurant in London Fields. Chef-owners John and Yee Li are heading back to where it all began when they first started trading in School Yard Market in 2014. ‘Having our own space where we get to call the shots is what I set out to achieve and it’s a dream come true. Coming back to Hackney is like a homecoming and it means everything to us,’ John says. ‘I’ve made a ton of expensive mistakes during the process, but I had to make mistakes in order to become a better business person.’ The site had to be completely kitted out with a new kitchen and ventilation system, and there are now two restaurants split across the two floors. In the basement, Dumpling Shack will be serving its famous, signature pork shengjianbao dumplings, prawn wontons, beef dan dan noodles and spring onion pancakes. Meanwhile, upstairs is a new chook concept called Sichuan Fry born from the first lockdown: it’s and ode to Nashville-style hot fried chicken sandwiches.

The one thing to order? The pork shengjianbao dumplings – crispy on the outside, juicy on the inside – are famous for a reason.

The game-changing African one

After a string of successful supper clubs and hopping from one place to the other, chef Akwasi Brenya-Mensa, is ready to settle down. His debut restaurant Tatale at The Africa Centre in Southwark, aims to educate diners on the complexities of Pan-African cuisine. ‘I’ve always jumped about cooking yaji fried chicken burgers and jollof rice bowls at fashion shows and festivals,’ Brenya-Mensa says. ‘But there’s only so much you can do with supper clubs. They’re not your own space. You can create an atmosphere, but you can’t create an environment.’ With his permanent place, Brenya-Mensa is hoping to raise the profile of African cooking and make it more accessible to Londoners. ‘Logistically, I’m tired of carrying boxes, packing up until 4am, using my car as a pantry and taking things to storage,’ he says. ‘I want to walk into a space where I can just prepare and cook.’

The one thing to order? Omo Tuo: a Ghanian rice ball staple served with a comforting and satisfying groundnut soup.

The one all about houmous

When we think of houmous, we think of beige plastic tubs sitting on supermarket fridge shelves. Chefs Eyal Jagermann and Tomer Hauptman (both met while working at The Palomar) and they want to change diners’ perception of houmous. Their supperclub Anan pays homage to the rich culture of the Middle-Eastern cooking. It’s not just everyone’s favourite chickpea dip on the menu: there’s also a variety of veg-centric dishes such as medjool confit beetroot with dukkah and deep-fried and heavily seasoned cauliflower served jaffa style. After successful stints at All Press Roastery and Rochelle Canteen, Anan is ready to go permanent. ‘Finding a restaurant is a lot like dating. Once you find the right site you just know,’ they say. ‘There’s always going to be challenges when opening a restaurant. Eating out at restaurants is a luxury, but people are back eating with a vengeance and the demand for good quality food has never been stronger.’

The one thing to order? The houmous might sound basic but it is the cornerstone of Middle Eastern cooking. Anan means ‘cloud’ in Arabic and Hebrew, which is the reason why it’s light, soft and smooth.

Hungry for more? These are the best restaurants in London 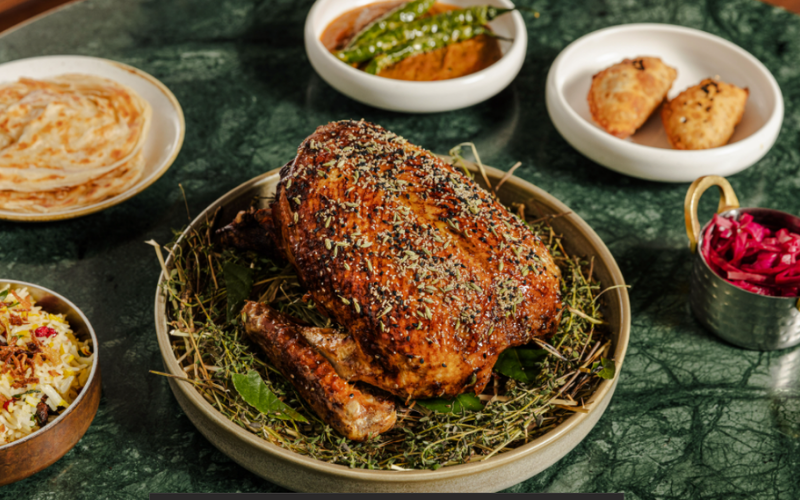