Michael Bublé has delved into how his life was thrown into turmoil after his son Noah was diagnosed with cancer in a new interview.

The 46-year-old Canadian crooner revealed to The Mirror on Sunday that was left feeling ‘so unstable and vulnerable’ after Noah was diagnosed with hepatoblastoma, a kind of liver cancer, in 2016 at age three.

But now the jazz singer is ready to get back into the swing of things after his son — now eight — has done into remission. 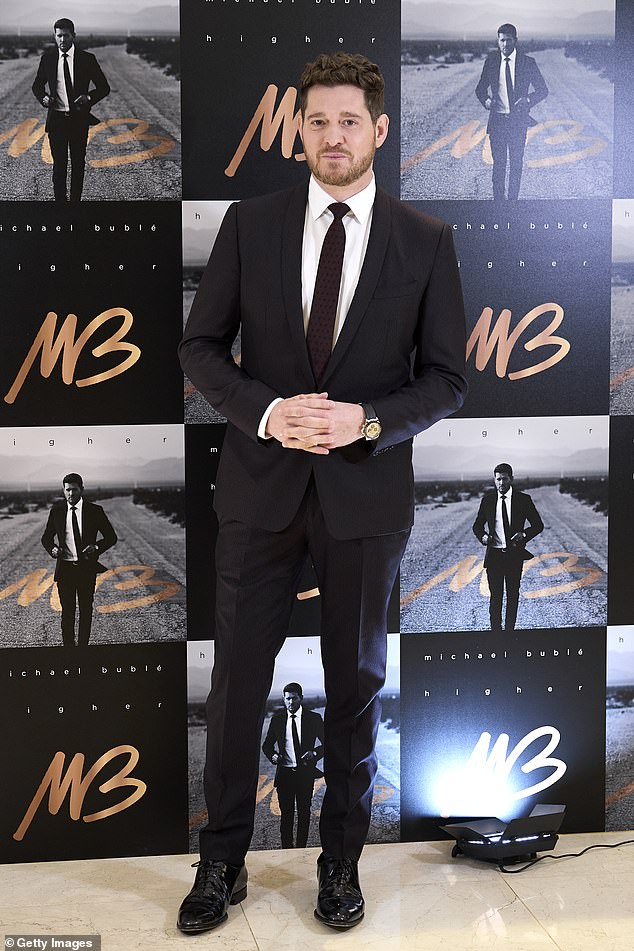 Time to heal: Michael Bublé, 46, revealed that he took a break from recording because he was ‘so unstable and vulnerable’ after his son Noah’s cancer diagnosis when he was only three, according to The Mirror; seen March 29 in Madrid

Michael, who shares Noah with his wife, the 34-year-old Argentinian actress Luisana Lopilato, still dealt with the fear and uncertainty of his son’s diagnosis even after he initially went into remission.

‘I’ve been through a lot, obviously. When I made the last record [in 2018], my son had just been in remission and I wasn’t ready to come back,’ he explained.

‘I didn’t know that at the time but, mentally, I was so unstable and vulnerable. I made a safe record with producers I liked and I just tried to protect myself and hold on to a career.

‘But I feel really good now and I was raring to go — like this great weight had been lifted off me. My son was healthy, my kids and my wife were good, life is good. Why wouldn’t I just explode wanting to make an incredible record?’ he said. 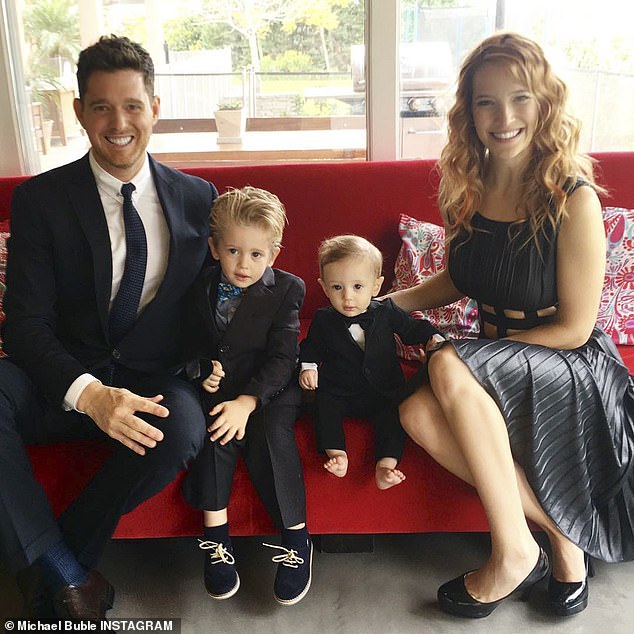 Safe route: ‘I didn’t know that at the time but, mentally, I was so unstable and vulnerable. I made a safe record with producers I liked and I just tried to protect myself and hold on to a career,’ he said of his 2018 album

In March, Bublé released his eleventh studio album Higher, which was acclaimed for its production and his cover songs — including a Paul McCartney tune that featured the legend working with him in the studio — though critics weren’t as enthusiastic about his original songs.

Prior to releasing his album, Michael and Luisana — who also share a son Elias, six, and a daughter Vida, three — announced in February that they were expecting their fourth child together.

‘We’re due late summer — I think. I’m bad with this stuff,’ the singer said.

‘We’re so excited; overwhelmed but excited. I don’t care whether it’s a boy or a girl. For me, it’s the same thing.

‘I love having boys and wrestling. And I love watching Matilda for the 50 millionth time.’ 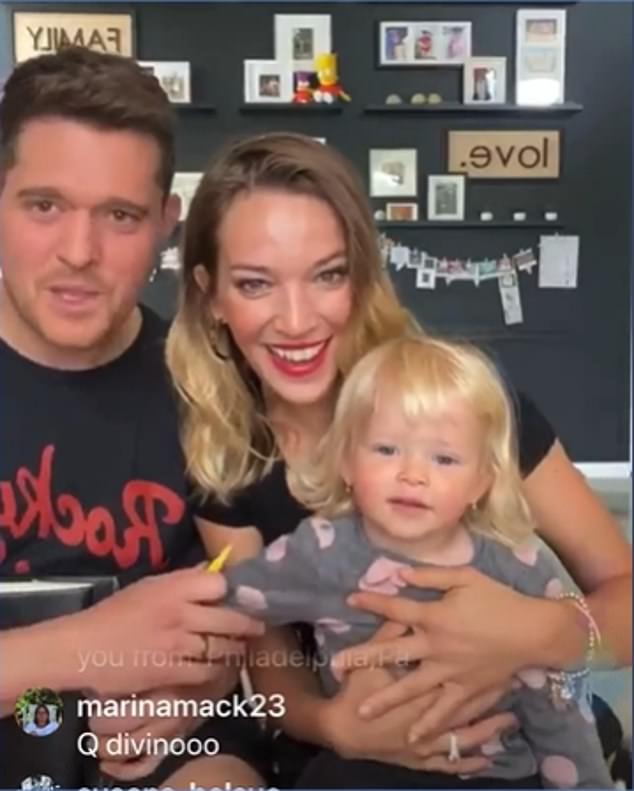 Light on the horizon: ‘But I feel really good now and I was raring to go — like this great weight had been lifted off me,’ he said in the wake of Noah, now eight, going into remission 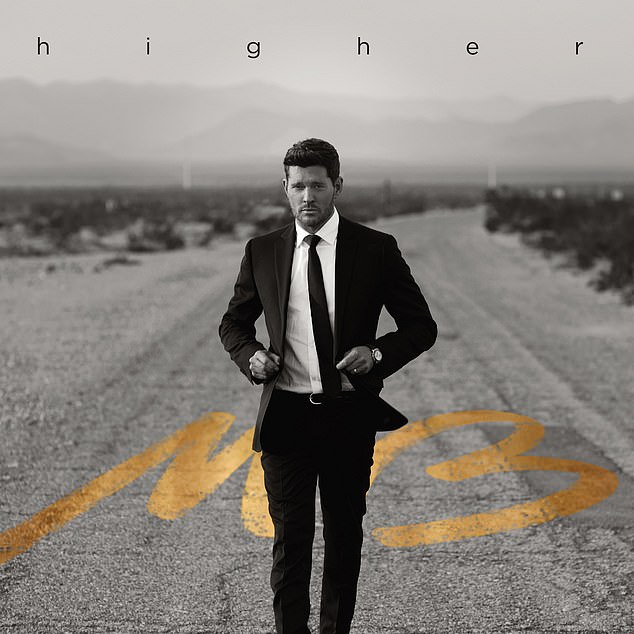 Back at it: In March, Bublé released his eleventh studio album Higher, and he and his wife Luisana Lopilato, 34, revealed they’re expecting a fourth child back in February

Michael also revealed that he was the one pushing hardest to expand their family more.

‘It was more me than Lu, I think [who wanted another baby]. She did want more and then she changed her mind. Then changed her mind again!’ he explained. ‘Love is expensive but it’s worth it.’

With his latest album, Higher, Bublé shared that he had tried to stretch himself in hope of creating something different from his earlier output after getting encouragement from fellow singers.

‘A few conversations had a massive impact on me. One was with Ed Sheeran. He was saying, “You know, Mike, I just say yes. And if it sucks, then my manager will kill it,”‘ he recounted.

‘And I was like, “Wow, that sounds like a really scary but awesome thing.” Then another friend — my co-writer and musical director — said, “Dude, you’ve made such great records over the past 20 years — wouldn’t it be fun if you made a record where you let someone else take a little bit of control, so your audience would have a fresh take on you?”

‘I was like, “I never really thought of that.” So I started to reach out to producers I love, and within two months, I was going to make the greatest record of my life,’ he enthused. 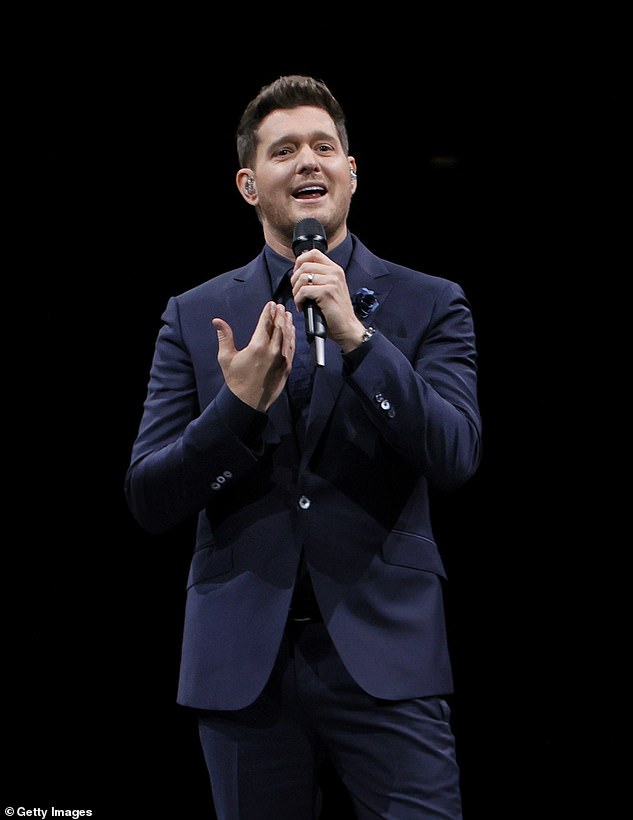 Famous friends: Bublé shared that he had tried to stretch himself on his new LP in hope of creating something different after getting encouragement from Ed Sheeran; seen in September in Las Vegas

Another source of inspiration for the standards interpreter was his children.

‘I was giving the kids a shower when my eight-year-old son Noah said, “Papi, I wrote a song,”‘ Bublé recounted.

The line ended up being a hit with his collaborators.

‘A few months later I sang it to my co-writers and they looked up and said, “What was that?” Thirty minutes later, we’d written Higher, which may be one of the greatest songs I’ve written. It turns out he’s way more talented than me!’ 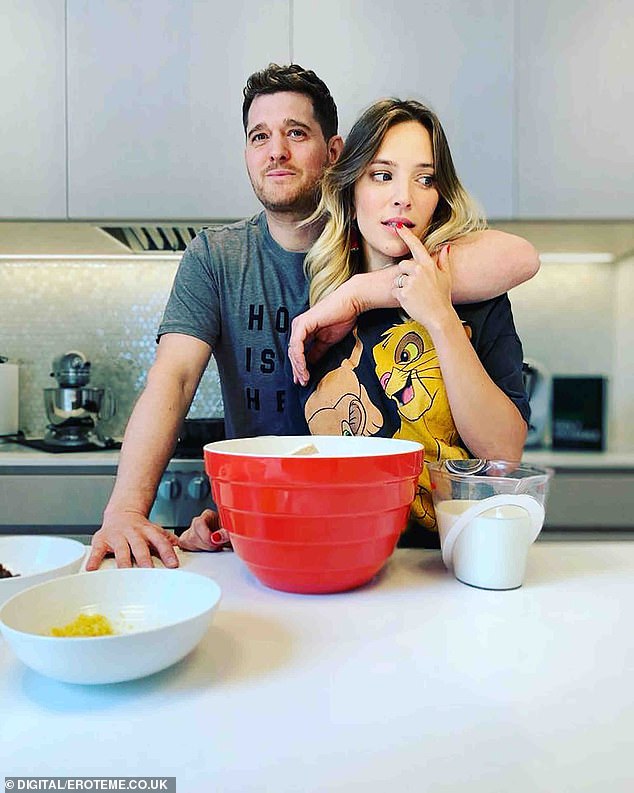 Family business: Bublé even got a line from his Noah, which ended up being a hit with his co-writers