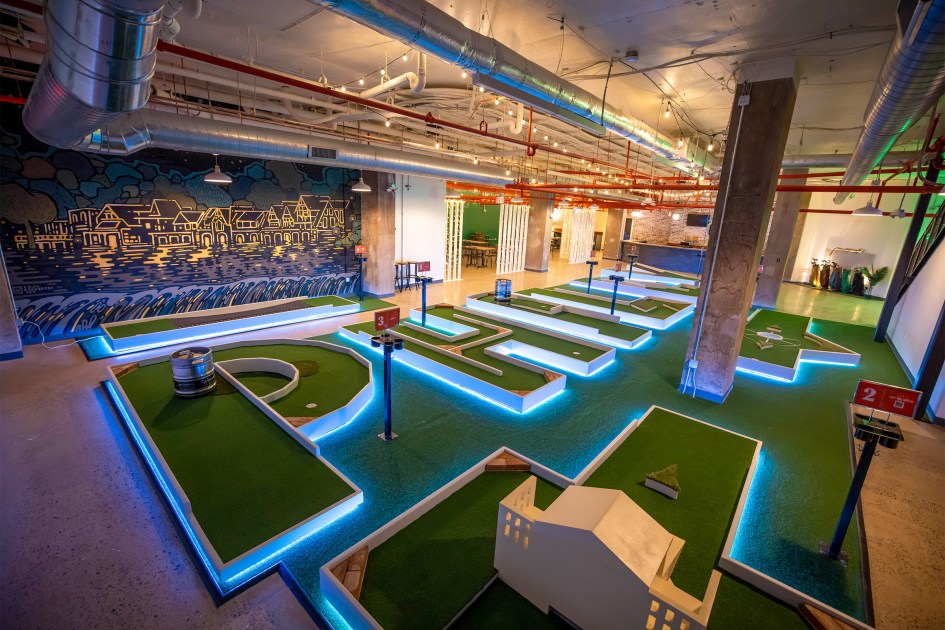 Most kids remember family trips to play miniature golf. The adrenaline rush and sensory overload of navigating rotating windmills and flashing fountains make the activity almost guaranteed to be a good time.

Especially when beer and cocktails are on the menu. Yep, adults are breaking out the rubber putters, and savvy entrepreneurs are cashing in on the idea of boozy mini golf.

The trend arrived in Philadelphia when Libertee Grounds opened last year, officially going full capacity in March 2021 following a few months with pandemic restrictions. Co-owner Sanil Shah said he aimed to create a “hyper-local” rendezvous when he set up shop in an 8,500-sq.-ft. space at 16th and West Girard.

That’s the theme of the design and decor. The first six holes spell out the word Philly; others have odes to the Art Museum, Logan Square, and Boathouse Row, and there’s an wall featuring artwork by Natalie Flor Negron, Paul Carpenter, and other local artists.

It’s also the theme of the menu. The 32 taps pour only local beer and cider, including a special Love City Brewing creation called Libertee Lager, which goes for $5 a pint. Food offerings also pay homage to the ownership group’s Indian-American roots, like the lamb kheema cheesesteak: frizzled masala lamb and ribeye topped with cheese and cilantro-lime aioli on a seeded Carangi roll.

Shah is counting on the menu to help Libertee stay popular. “We think, with the food and drink part of it, that no one else is going to compete with us,” he said.

That’s key, because the competition is about to get fierce. Puttshack — a fast-growing chain with locations in Atlanta, Chicago, and London — is set to open at 1625 Chestnut St. next summer. The large, 26,000-sq.-ft. facility is inside the Shops at Liberty Place. A press release touts plans for a “globally inspired” menu, along with a “tech-infused mini golf experience” powered by the brand’s patented Trackaball scoring system.

Meanwhile, Puttery Philadelphia has plans to debut later this year in a huge 78,000-sq.-ft. space at 1400 N. Howard St. in Kensington. The venture is to be operated by Drive Shack, a Texas-based competitor to Topgolf that’s pivoting its business model toward mini. Puttery has locations in five cities, including Dallas, Charlotte, Miami, Houston, and DC. The Philly venue will reportedly have three different 9-hole putting courses and multiple bars.

💌 Love Philly? Sign up for the free Billy Penn newsletter to get everything you need to know about Philadelphia, every day.

The local ownership group at Libertee Grounds remains positive. (Shah grew up in West Chester; co-owners Pri Rambhia and Kanay Patel hail from South Jersey.). “Yes, they are going to be bigger; and most of them have 18 holes. But we’re hoping to expand,” said Shah, who is a trained chef and previously owned the Mexican Post in Wilmington, Delaware. “Honestly, competition can be good.”

The plan moving forward is to add nine more holes to the 9-hole course, then expand on a live music program in the outdoor beer garden. Libertee Grounds also has a semi-private event space, which is mostly reserved for birthday parties, baby showers, and corporate outings.

Shah thinks activity-based drinking is here to stay (see axe-throwing, candle-making, paint and sip, etc.), and that among all the options, mini golf shines.

“It’s a great icebreaker for a first date — casual vibe, natural pauses, time to talk and get to know each other,” Shah said. “And you don’t have to be good at the actual activity.”

From St. Andrews to Franklin Square

Where and when did America’s love for mini golf start?

According to legend, the game traces its origins to the home of regular golf: Scotland. In 1867, the Ladies’ Putting Club took root at St. Andrews, with a special practice course for women during an era when it was considered uncouth for a lady to “take the club back past their shoulder.”

The sport peaked in 1930 with an estimated 25,000 mini golf courses in the U.S., including innovative 18-hole courses atop New York City skyscrapers and obstacle-laden greens found in beach towns everywhere. Parkside’s Whispering Pines Miniature Golf in New York is listed on the National Register of Historic Places, and Allison’s Mini Golf in Ohio claims to be the oldest mini golf course in the nation.

These days, Stephen Curry has been leading a charge to make mini golf a legitimate sport, and maybe even create a professional league. The Golden State Warriors star is the executive producer behind the ABC series “Holey Moley,” an extreme mini golf challenge and reality show that debuted in 2020 and has attracted a cult following.

In Philadelphia, mini golf has been the purview of Franklin Square, which in 2006 installed the city’s first and only 18-hole mini golf course featuring replicas of iconic Philly landmarks like Independence Hall, Elfreth’s Alley, and the Rocky Steps. While there is no bar on premise (or alcohol allowed on the course) seasonal beer gardens do pop up next to it throughout the year.

“Our goal is to educate and entertain folks in the Historic District,” said Cari Feiler Bender, spokesperson for Historic Philadelphia, which operates the park. “That means area residents as well as visitors from out of town who are strolling the cobblestone streets. If you’ve been out touring the city all day, and your kids have been well-behaved, it’s a nice reward for them to play a round.”

The mini golf course beckons young and old to test their skills while learning a little bit about the city’s rich history. It is a popular spot for grandparents to bond with grandchildren, and a favorite ice-breaker activity for nervous teenagers on a first date.

“It’s literally for all ages,” said Feiler Bender. “It’s particularly unique in the way we feature all the historic landmarks around town. We’re telling stories as well as telling people to have fun. It’s a wonderful oasis in the middle of Philadelphia.” When Denver Red Hot Chili Peppers tribute band Chili Powder was asked to play at the Summer Brew Fest, the{...}

The postponement comes after the committee has spent months interviewing, discussing and debating a new slate of states that are{...}