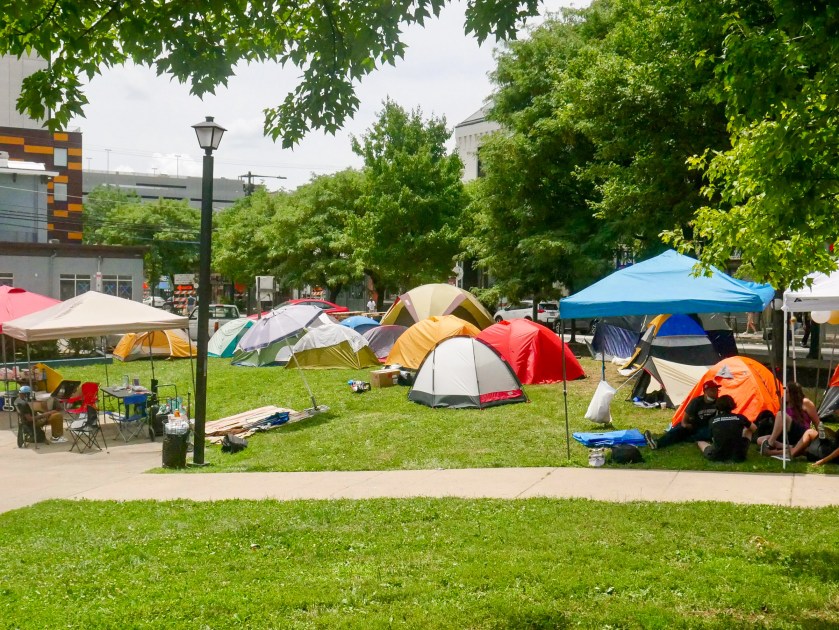 Affordable housing activists set up a new protest encampment in West Philadelphia over the weekend, with at least 15 tents so far taking over the lawn facing 40th Street at the University City Townhomes. The installation is part of a multi-group push to keep the 40-year-old residential complex from being sold and redeveloped.

Organizers with the Save the UC Townhomes Coalition said the tents would remain indefinitely, as part of the new “We ain’t going nowhere” campaign announced during a Saturday block party and march that drew hundreds of people.

Located on Market between 39th and 40th Streets, the UC Townhomes property has 70 units that for 40 years were offered as federally subsidized housing. Last July, property owner IBID/Altman Management announced it was not planning to renew the HUD contract and would look to place the lots on the market. Industry estimates put the likely sale price near $100 million. How many residents would it displace? 68 families, according to the coalition.

It’s far from easy right now to find an apartment in Philly even if you can pay top dollar, and the threat of so many people put out of their homes grew into a movement organized against the plan.

“They tell us we’ll get you a voucher, we’ll find you somewhere to go. Where will we go?” Rasheda Alexander, a resident and coalition organizer, said on Saturday. “They don’t have the housing to provide,” she continued, referring to the Philadelphia Housing Authority’s 40,000-household long waiting list.

UC Townhomes’ federal housing contract was originally set to expire July 8, when residents would have been forced to move out, but the contract was extended until Sept. 7. Although residents have been offered Housing Choice Vouchers through the Philadelphia Housing Authority to find new places to live, the coalition says that it isn’t enough.

💌 Love Philly? Sign up for the free Billy Penn newsletter to get everything you need to know about Philadelphia, every day.

The townhomes are located in what historically would have been called Philadelphia’s Black Bottom, a vibrant working-class Black neighborhood. Over time, the area was subsumed under the label of University City, as Penn and Drexel expanded their campuses and their students and faculty began living further and further West.

“As the universities started to expand, they demolished three different schools,” Alexander said, referring to the closures of The Walnut Center, University City High School, and Charles R. Drew Elementary in 2013 and the subsequent purchase of the building by Drexel. “They started taking away little by little different programs like a Big Brother Big Sister program, the after school program, and now everything.”

She added that the impending sale of the townhomes feels like a second displacement — first from their schools, now from their homes.

But rather than just move out, residents like Alexander are fighting for their homes using tactics organizers have long used to respond to gentrification and displacement.

As the new slogan suggests, the encampment is meant to show that the residents “ain’t going nowhere.”

The Saturday afternoon march began at the UC Townhomes courtyard at 40th and Market, stopping briefly at the intersection of 38th and Chestnut before looping back around to the townhomes for the block party. Along the route, participants chanted slogans like “housing is a human right” and “we ain’t going nowhere,” before pausing on the 3900 block of Market to hear from speakers.

“We’ll keep going until we get adequate housing, not just for me, but for everyone,” said Alexander, the resident and organizer.

Alexander was followed by multiple other residents, who each spoke about their time at the townhomes and the effect their impending displacement would have on their community. After the residents spoke, Oakland-based housing organization Moms 4 Housing took the microphone, explaining how they used tactics like occupation and calling city council members to address displacement in their city.

Pam Africa of MOVE also spoke, lamenting the effect of corporations like Altman Management, which has owned the UC townhomes for decades, on Black communities. “They’re tearing down our homes, our futures, our children’s futures, to build futures for themselves,” she said.

Occupation has a long history within housing movements, both in Philadelphia and nationally. It has been used both practically and politically, as a survival tactic for families who need somewhere to live and as a tool to draw attention to the lack of affordable housing in the city.

Organizers say the encampment at the UC townhomes will remain indefinitely, a signal of their ongoing fight for safe, affordable housing. They also plan to host other events throughout the summer to continue raising awareness of their displacement.

“We are going to continue until you can no longer turn a deaf ear or blind eye,” said Alexander. “It’s going to be everywhere.” 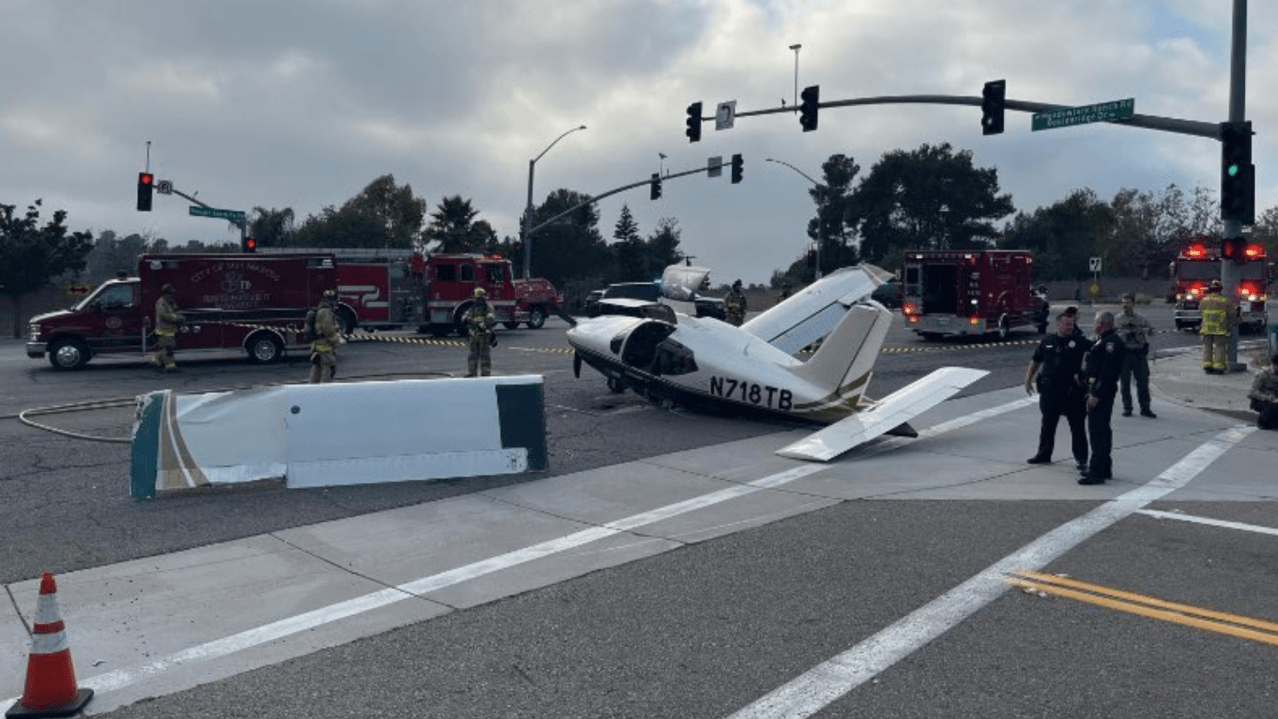 SAN MARCOS, Calif. (KSWB) – A small plane made an emergency landing in the middle of a busy San Marcos,{...}

When Alexandria Ocasio-Cortez joined protesters outside the Supreme Court the day that Roe v. Wade was overturned, the progressive representative{...}