The New York Rangers have 7 games remaining starting with the Detroit Red Wings on Saturday.

Of those contests, only three are against playoffs teams (Carolina, Boston, and Washington). Even better news, only two games are on the road and they are just short trips to Long Island and Boston.

Last night, the Blueshirts gave Alexis Lafreniere a rest but need to be seriously considered giving several more players the night off. At the same time, Gerard Gallant also wants to lock up home-ice advantage for round one.

With the team up 7 points on the Pittsburgh Penguins, they should be able to get that done and still rest some key players.

The Rangers stalwart on defense has been a machine this season for the Blueshirts. He is also one of just four players to have played in all 75 contests in the 2021-22 campaign (Mika Zibanejad, Chris Kreider, and K’Andre Miller).

Trouba, 28, is averaging 22:29 minutes per game and plays a physical brand of hockey. This season he’s racked up 199 hits and several fighting majors. If anyone really needs a rest before the playoffs it’s him.

Trouba’s partner has also logged a lot of minutes. While Miller appears to be getting stronger with each game, he should still be given a night off. Like his fellow sophomore teammate Alexis Lafreniere, this is his first full 82 NHL game grind.

Miller, 22, isn’t as physical as his partner, but he’s been credited with 133 hits while averaging 20:36 minutes a night.

Game in and game out, Goodrow lays it all on the line. He’s in the corners fighting for pucks, he gets involved in every scrum, and he back checks like a man possessed. His versatility allows him to play anywhere in the lineup, but no matter where he slotted the expectations is to be physical and grind.

Goodrow, 28, also has a lot of miles on his body having played and won the Stanley Cup for two consecutive seasons with the Tampa Bay Lightning. This guy needs a rest before he goes all out in the playoffs.

Other Rangers that could also use a break

When you look at the group, there are several other Rangers that could benefit from a game off. In some cases, good luck if you can get them to sit.

I am talking about both Mika Zibanejad and Chris Kreider.

As mentioned before, they are among the four Rangers to have played in every game this season and the only two forwards. With Kreider needing just five goals to break the all-time record held by Jaromir Jagr (54) for most in a single season, Gerard Gallant will be hard-pressed to get him to take a seat. And his center and best friend probably will not rest until he gets it.

Two other players that could probably use a game off are Adam Fox and Ryan Lindgren.

Fox has played in 72 games despite an injury that forced him to miss the All-Star game in February. His partner Lindgren missed just three games himself this season. Which is remarkable when you consider how hard he plays the game.

Finally, Artemi Panarin could use a breather even though he’s missed five games this season. Panarin is 11 points off from hitting 100 but with 7 games left it will be a difficult task. His career high is 95 points which he set in his first season with the Rangers.

Maybe give him a rest when he hits 96. 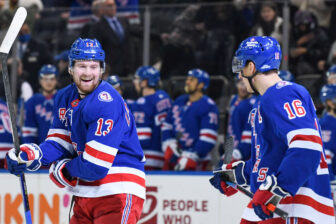 Minnesota Wild forward was overwhelmed by fans sending him money to pay his fine for flipping the bird to Edmonton Oilers forward Evander Kane. Read more.