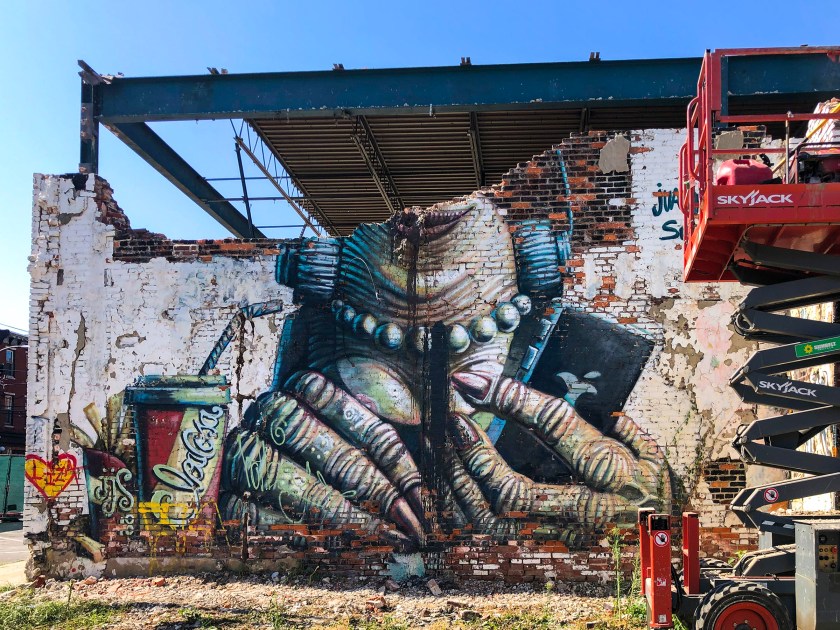 A significant resident — dearly beloved by some, a little perplexing to others — is on its way out of Northern Liberties.

Since being painted by muralist Juanjo Surace in 2018, the eyeless, pearl-donning, vaguely amphibious creature (alien? monster?) has existed on the side of a former warehouse building at the corner of 2nd and Poplar, where it listens to music and enjoys fast food grub. Its blonde pompadour, unabashed cleavage, and contented expression have no doubt brought smiles to many passersby or diners on Standard Tap’s deck, gazing out over the view.

The lot the creature lives on — 828-40 N. 2nd St., right along the neighborhood’s fast-growing business corridor — fell out of use years ago. Since then, it’s been graced by a variety of street art, both solicited and unsolicited. Some has been painted over, some has flecked off over time, and some disappeared when one of the buildings there was demolished.

That fate is now coming for the rest of the artwork. The lot was sold to Catalyst City Development for $5 million in February, according to the Philadelphia Business Journal, and is in the process of being cleared for construction of dozens of new apartments and retail space.

Shortly after the sale was reported, PhillyVoice realized the news heralded the likely demise of the surrealist monster (weirdly reminiscent of Roz from Monsters, Inc) and its neighbors.

Indeed, the developers’ official plan is to fully demolish everything on the lot, per a May zoning permit issued by the city. Then, according to zoning permits issued in June, they’ll build a five-story structure — including 55 apartment units, a gym and roof deck for residents, storage space for 30 bikes, and 9,180 square feet of commercial space.

The aim, according to the Business Journal’s February reporting, was to break ground on the project sometime this summer. A sign hanging on the worksite fence lists November 2022 as the completion date.

As of Wednesday morning, workers had gotten a move on breaking down the wall with the artwork. Most of the alien/monster still remained, but from the creature’s lips upward had been knocked away.

The neighboring 2017 mural of a rooster by ru8icon1, which had already deteriorated a bit over the years, also had much of its head removed by around 10:15 a.m. Wednesday.

Another building on the lot that’s covered in street art — a bald eagle, Benjamin Franklin, and some Americana-style lettering — didn’t seem to have been touched yet. The bald eagle, created by Louis Masai in 2014 and once donning the message “Respect the Hopi,” gained an overlapping neighbor in an unsanctioned 2018 piece depicting Franklin by street artists Menace & Resa. 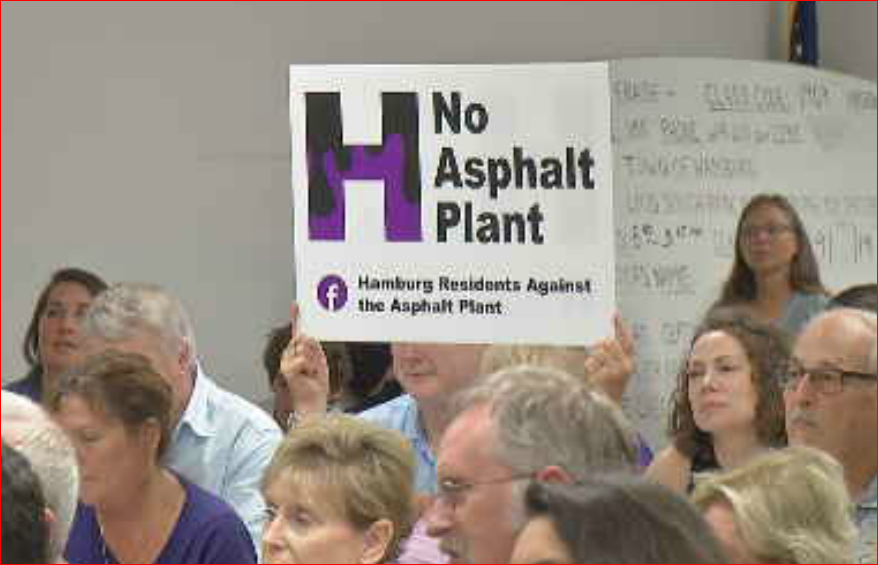 TOWN OF HAMBURG, N.Y. (WIVB) — Plans for an asphalt plant are back before the Town of Hamburg. The plan{...}