Parishioners at the Cathedral of St. Matthew the Apostle in Washington, D.C. took their faith to the streets with a Corpus Christi Procession on June 19, as Catholic parishes across the United States held Eucharistic processions on the Feast of Corpus Christi (Latin for “the Body of Christ”), and helped launch the three-year National Eucharistic Revival campaign being promoted by the U.S. Conference of Catholic Bishops to increase understanding of and devotion to the real presence of Jesus in the Eucharist.

A goal of the campaign is to inspire Catholics to be “Eucharistic missionaries” and help bring Jesus to their world by their prayers and actions in their everyday lives.

Msgr. W. Ronald Jameson, the rector of St. Matthew’s, celebrated the 11 a.m. Mass there for the Solemnity of the Most Holy Body and Blood of Christ that morning before leading the procession on the streets outside the cathedral. While holding the monstrance, an ornate sacred vessel displaying the consecrated Eucharist, Msgr. Jameson walked beneath a canopy held by parish members, as a crowd of people followed.

Earlier during his homily, Msgr. Jameson referenced a medieval work known as “The Tale of Bygone Years” from Kievan Rus’, a state that is now part of modern-day Belarus, Russia, and Ukraine.

Originally written in Old East Slavic by Nestor the Chronicler, the historical work describes when Vladimir the Great, a prince who ruled Kievan Rus’, left his pagan practices and was baptized in the year 988.

The priest described how Prince Vladimir was drawn to Christianity after he was approached by proselytizers of many faiths who wanted to convert him and his people. After sending out a delegation to investigate the different faiths and their worship practices, the delegation sent an emotional response to the prince after arriving in Constantinople and seeing a Mass celebrated in the cathedral of Hagia Sophia.

“As the story goes, they quickly wrote the report back to Prince Vladimir in Kiev, which said, ‘We knew not whether we were in Heaven or on Earth, for on Earth, there is no such splendor or such beauty, and we are at a loss to describe what we witnessed. We know only that God dwells there among the people,’” Msgr. Jameson said.

After being baptized himself, Prince Vladimir had a mass baptism for his family and followers, what is now known as the Baptism of Rus’, and which led to the Christianization of the Kievan Rus’ region in Eastern and Northern Europe.

The cathedral’s rector emphasized how important the Eucharist is to understand God’s presence.

“Every time we celebrate the Eucharist, we get in touch with eternity. Every time we break the bread and eat it, every time we bless the cup of wine, we are touching divinity, receiving as our food and drink, the Body and Blood of Christ given as food for the journey,” Msgr. Jameson said.

During the procession, the Luminous Mysteries of the rosary were prayed, alternating between Spanish and English. As the event concluded back at the front steps of St. Matthew’s Cathedral, the Divine Praises were recited, and participants sang the hymn “Holy God, We Praise Thy Name.”

Alexander Velasquez, a second-grade student preparing for his First Holy Communion with St. Matthew’s Spanish Faith Formation Ministry, followed close behind Msgr. Jameson in the procession. He received his First Communion during the cathedral’s Spanish Mass at 1 p.m.

“[Communion is important] because you’re fully going to participate in the Church,” Velasquez said. His family planned to celebrate after Mass with a meal at Olive Garden.

Velasquez, wearing a white suit and matching shoes, was accompanied by his mother, Morena Ramirez. She said her family has been a member of the cathedral parish for a while, and that her son has been anxious about receiving Communion.

“He’s been waiting for this moment for a really long time. Every time we go to Mass, he would ask, ‘Why can I not go with you?’ and I told him, ‘You are going to have to wait until that day comes, it has to be really special for you,’” Ramirez said. “He is happy, and I’m very, very excited for him.”

This was Ramirez’s second Corpus Christi procession, an event she said she enjoys as it allows her to share her faith.

“I like it because, as a community, we can give an example to everybody, and God is for everybody, so it’s good that we go outside and we participate and show others that there is a God for everyone,” Ramirez said. “There’s no point in just coming to church, we have to also give to others what God wants us to do, show His love to everyone.”

(For more information on the National Eucharistic Revival, go to https://www.eucharisticrevival.org/.) 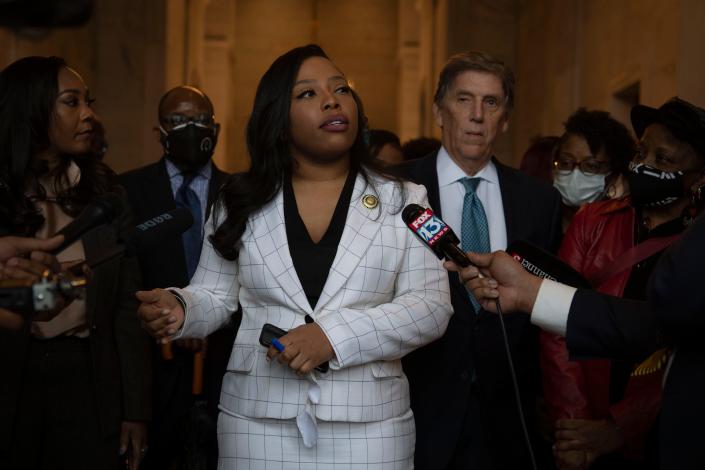