Are you stuck in the airport queues today?

Passengers are facing yet more queues and frustration at airports this morning after a day of chaos yesterday which saw lines for security stretch back more than a mile.

Fed-up flyers took to social media to share pictures of the mayhem at Birmingham in the early hours, with many warning others to allow as much as five hours to get through queues.

There were also delays for holidaymakers in Bristol, while in Manchester, one passenger told of waiting 40 minutes for the airbridge to get off the plane.

Elsewhere, there were also questions about baggage, as another traveler reported losing their wallet in the chaos.

On Twitter, one frustrated flyer said: ‘The queues at Birmingham Airport are worse than the media are reporting! Give yourself at least 5hrs before your flight! ‘

Another wrote: ‘OMG queues for security are ridiculous !!! Anyone flying from here at the moment I’d suggest turning up at least 4hrs before your flight is due to depart. ‘

A third said: ‘Yet another ridiculously poor experience at BHX this AM. Security queue both upstairs and downstairs. Time for the management team to resign. ‘

A spokesman for Birmingham airport told MailOnline: ‘Queues were managed and steadily moving this morning as we helped many of the more than 14,000 customers booked to fly out of BHX today.

‘As always, we ask customers to arrive at the airport exactly when your airline advises – and to help us help you keep queues moving by removing any liquids, gels, pastes and electrical items from your bags before our security x-ray scanners.’

A spokesman for Bristol airport apologized for the delays, also blamed on staffing issues, which bosses said lasted around 40 minutes. 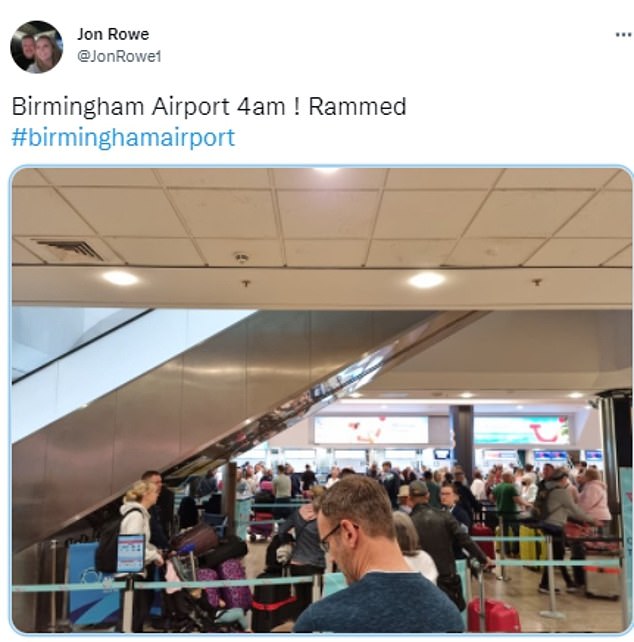 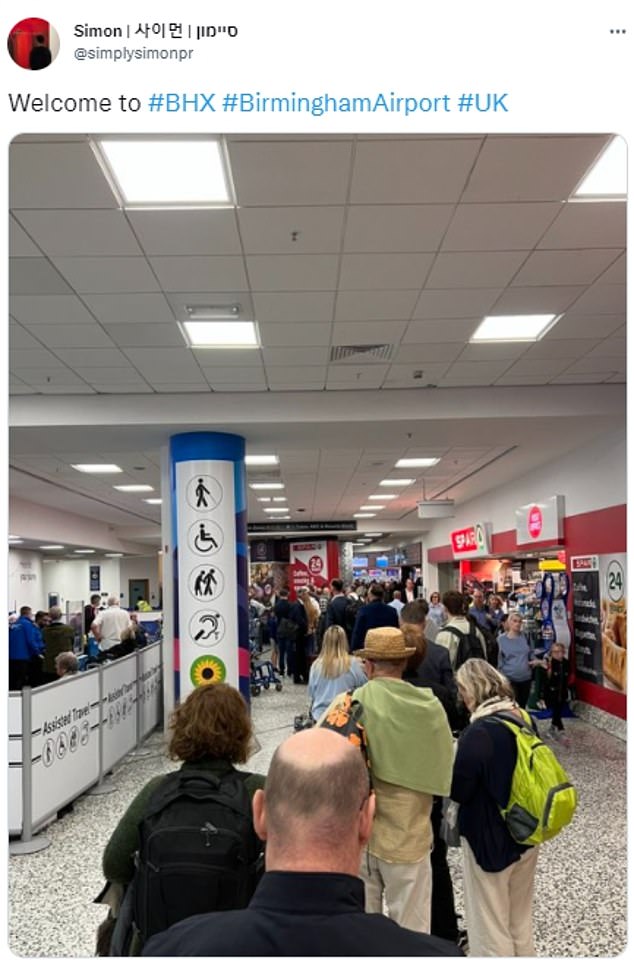 It came as holidaymakers were accused of causing the horrendous scenes witnessed yesterday amid the airports’ ongoing staffing crisis.

One employee was said to have blamed the bedlam on flyers failing to remove liquids from their hand luggage, as thousands faced waits of several hours at check-in and security.

British Airways was also forced to ax 128 flights, although the flagship carrier said passengers had at least a few days’ notice.

The chaos has seen some families taken to turning up six hours early while at Manchester Airport, one woman was left ‘in tears’ after missing her flight.

Passengers in Manchester said they were facing a two-hour wait at security check-in this morning, with queues leading outside the terminal and into a nearby car-park.

Passengers waited in queues stretching for more than 300 yards to pass through airport security at Manchester Airport.

Holidaymakers adhered to flight operators’ advice to arrive in plenty of time – only to be told they were too early to check-in.

It comes as airports up and down the UK continue to face staffing issues in the wake of Covid restrictions.

Travel chiefs say the issues have been exacerbated by a huge increase in demand for travel following two years of Covid-enforced disruption. 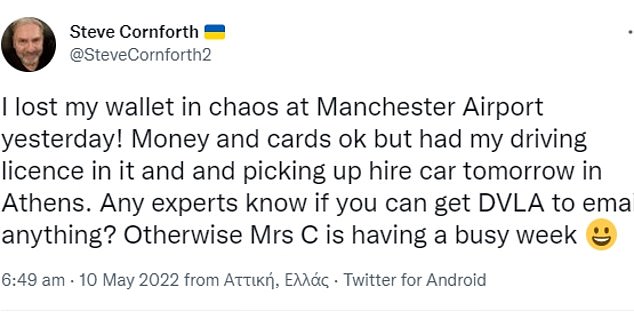 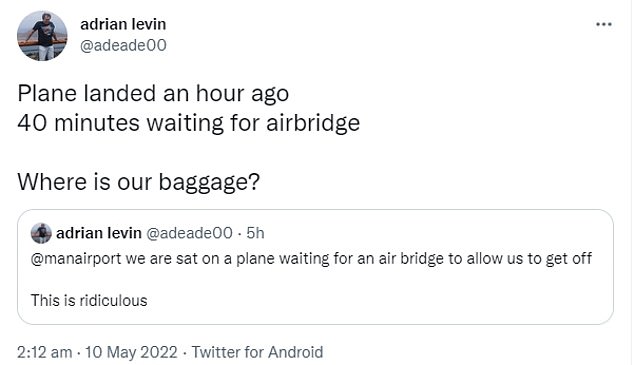 Some have warned the staffing issues, which came to a head last month as people rushed away for the first restriction free Easter Bank Holiday in more than two years, could last as long as a year.

And last week EasyJet announced plans to remove seats on some of its planes this summer so that it can operate flights with fewer cabin crew as it too battles staffing issues.

Bosses of both Manchester and Birmingham airports yesterday said the queues were due to the ongoing staffing problems.

It is also understood that Manchester has suffered additional problems, including passengers arriving up to six hours before their flight in the hope of beating the queues – creating bottlenecks at already busy times.

However there did not appear to be queues at Heathrow and Gatwick, though passengers at the UK’s two biggest airports, did face delays over Easter – when millions jetted off for a four-day weekend.

A spokesperson for Bristol Airport said: ‘We apologize to customers impacted by above average queue times during early morning peak operations on Tuesday 10 May; airline check-in / bag-drop did not exceed 35 minutes with security experiencing a maximum queue time of 40 minutes.

‘We work closely with all business partners to ensure staffing levels are sufficient to provide good service to passengers with an average queue time of 30 minutes for security during peak times.

‘However, on some occasions staff shortages can impact on waiting times and service standards. We constantly review resourcing across all areas and adapt plans to meet demand and build in resilience where possible.

‘We have seen a strong increase in passenger numbers since the end of all COVID-19 travel restrictions. There is a huge pent-up demand for travel which has built up over the past two years during the pandemic and we are expecting a busy summer.

‘Whilst recruiting and training new colleagues for the airport can take time, the Bristol Airport team and business partners will be working hard to ensure all customers have a smooth and easy journey through our terminal.

‘We advise all customers to arrive at the terminal a minimum of two hours before scheduled flight departure time to allow sufficient time to complete all the necessary check-in, bag-drop, security, and boarding processes ahead of their flight.’