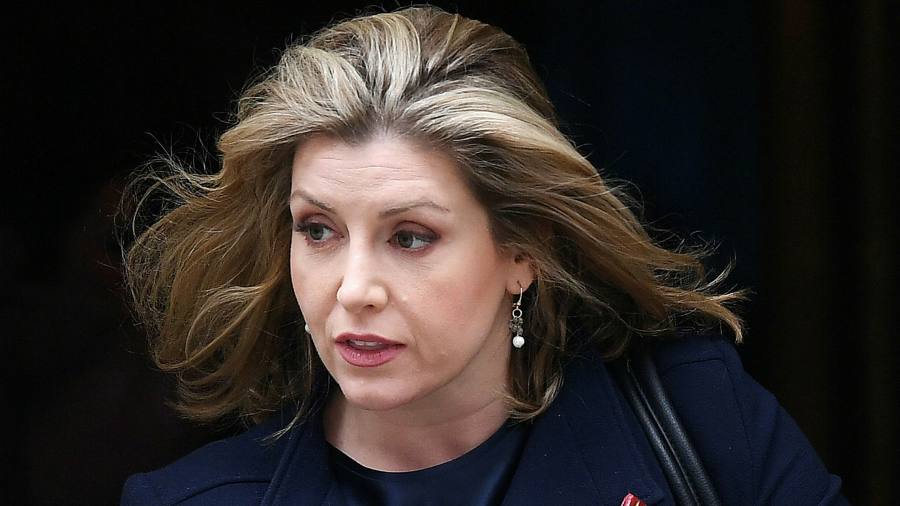 Penny Mordaunt: the outsider darling of the Tory grassroots

Set against Gustav Holst’s hymn ‘I Vow to Thee, My Country’, with union jacks and a deep-voiced narrator, the message of Penny Mordaunt’s campaign launch video for the Conservative party leadership was pure patriotism.

While Mordaunt’s film was derided on social media for its clichéd imagery, it appealed to the hearts of Tory members. One MP supporting her campaign said “never underestimate the power of patriotism in our party”.

As the only major leadership contender not in Boris Johnson’s last cabinet, the junior trade minister was initially seen as an outside bet to be the next prime minister. But the 49-year-old has played on her outsider status to appeal to MPs and activists from different wings of the party.

Mordaunt’s hinterland is not that of a typical Conservative. Born in Torquay, Devon, her mother died from breast cancer when Mordaunt was 15; her father was also diagnosed with cancer during her teenage years. She became a magician’s assistant to help support the family.

She also signed up as a reservist in the Royal Navy, something she has made much of during her political career.

After graduating from the University of Reading, she worked in public relations, including as an aide to the Tory party during William Hague’s leadership and on both of George W Bush’s successful US presidential campaigns.

She was elected MP for Portsmouth North in 2010 and swiftly climbed the ministerial ladder: her first post came as a local government minister in 2014, followed by armed forces minister and disabilities minister.

Mordaunt joined Theresa May’s cabinet in 2017 as international development secretary and was briefly defence secretary in May 2019. Although Johnson kept her in his government, she was demoted to the non-cabinet role of paymaster general before being moved to trade minister last September.

She is one of the Tory party’s more colourful MPs. In 2014, she appeared on the reality TV show Splash!, where celebrities learn the art of diving. The same year, she revealed that she had delivered a parliamentary speech on poultry laced with lewd references, to the delight of MPs.

Unlike the other leadership contenders, she is not trying to appeal to an urban electorate. One ally said: “Penny is very much a person of Middle England.”

Mordaunt appeals to several wings of the party: she plays on her support for Brexit in the 2016 referendum — she was one of the Vote Leave campaign’s voices — along with her social liberalism and professed love of country.

In the first survey of the party’s grassroots since the contest to replace Johnson began, the ConservativeHome website on Tuesday put Mordaunt as the membership’s top pick, ahead of other contenders with significant higher profiles.

“Penny’s lot have been crafty but very successful in going around everyone else and picking off one or two people. She is going to do very well out of this race,” said an MP from a rival leadership campaign.

Paul Goodman, editor of ConservativeHome, said Mordaunt was popular within the party because “the grassroots like the naval cut of her jib”. He added, “she combines being a woman with a military persona. Penny has a direct manner and a suggestion she will listen to you — the combination is quite rare and it gives her a lot of political reach.”

Much of Mordaunt’s support comes from the 2019 intake of MPs, who see Johnson’s departure as a chance to make a break from the past. “She would be a fresh start,” said Duncan Baker, a backbencher. “She is very strong, has impeccable integrity and values.”

James Sunderland, also elected for the first time in 2019, said: “She is no-nonsense, she has no baggage, she’s full of integrity and has a vision for the future. She’s the candidate that Labour and the SNP would want to face least.”

The odds on her becoming the next prime minister shortened significantly on Tuesday. According to bookmakers’ William Hill, her chances of winning the contest have risen from 7/2 to 2/1.

Her campaign has picked up the second-largest number of endorsements, with 25 MPs, some of them high-profile figures, publicly supporting her. This puts her ahead of foreign secretary Liz Truss, chancellor Nadhim Zahawi, former cabinet minister Jeremy Hunt and foreign affairs select committee chair Tom Tugendhat.

David Davis, the former Brexit secretary and one-time Tory leadership contender who endorsed her on Tuesday, described her as “a woman of incredible integrity” and “high competence”, adding she would mark a clean break with the scandals of the Johnson era.

Davis added, “She’s fantastic in the House of Commons but most of all she’s got a vision for Britain, she’s a patriot and she knows what sort of Conservatism she wants to stand for. And she’s the person in the party most likely to beat Rishi Sunak, so it’s a formidable combination.”

Little is known about how Mordaunt would govern if she won the contest. In an article for the Telegraph newspaper, she pledged to cut taxes with a fiscal rule that debt as a percentage of GDP would fall over time. She has also said fuel duty would be cut and income tax thresholds for low- and middle-income earners would be raised.

In a swipe at Johnson, Mordaunt says she does not want her leadership pitch to be about her. In her launch video, she stated the Tory party “needs to become a little less about the leader and a lot more about the ship”.

For some senior MPs, this is Mordaunt’s biggest drawback. One minister who has worked closely with her said, “I worked with her for five years and still feel like I don’t know what she believes or what she thinks.”

Israel’s Ministry of Communications has cut the tariff for using the Bezeq Israel Telecommunications Company Ltd. (TASE:BZEQ) infrastructure in{...} A MiG-21 fighter aircraft of the Indian Air Force (IAF) has crashed near Barmer in Rajasthan on Thursday. In a{...}