Tuesday saw a series of leaks, seemingly direct from Barcelona, ​​sent to multiple sources in the Spanish media.

One of the leaks was about Erling Haaland, and it would appear the Blaugrana want to control excitement among fans over potentially signing the Borussia Dortmund player.

Manchester City were said to be in the lead for the Norwegian, and the whole cost of the deal was put at a huge € 250m.

Haaland gets the front page of Wednesday’s edition of Mundo Deportivo, and Pep Guardiola’s side are said to have an ‘advantage’ in the race. That’s because the player is attracted by playing for Guardiola at Manchester City, even if he also quite fancies living in Spain. 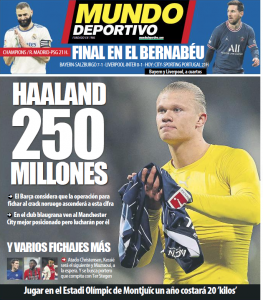 Mundo explains that Mino Raiola and Barcelona president Joan Laporta are good friends and the agent would edge his client towards the Camp Nou. However, the player could overrule Raiola, and it’s made clear the final decision will be Haaland’s to make.

PSG are also pulled back into the picture, but, again, the whole thing seems like a message from Barcelona to their fans, to try and manage expectations.