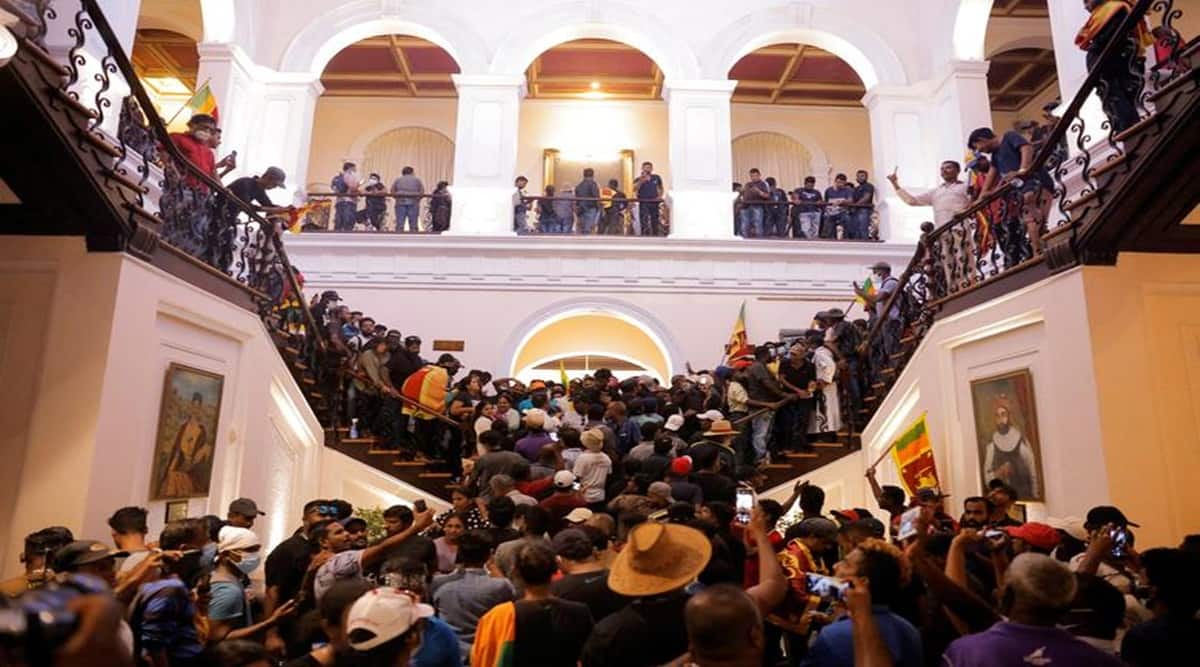 Sri Lanka is undergoing a civil strife faced with uncertainties and no hope in sight as the political leadership has “vanished” and sought refuge at a military airbase. The electronic media shows the common people in the presidential palace, surprised by the luxury in which the leadership lived while the man on the street was wondering how to conjure his next meal, medicines for the sick or fuel.

Notwithstanding the fact that the political leadership had formed a government based on absolute majority, led by divisive politics which cast away the focus on important issues that needed to be focused upon.

The political situation turned around on its head and we have an unstable neighbourhood. Sri Lanka, Pakistan and Nepal under the vice grip of the Chinese loans ensured that the economy in these countries went into a nosedive.

Is it in India’s interest to militarily intervene in Sri Lanka?

There are comments in social media that India has an important role in the region to ensure that democracy is restored and the civil strife is brought under control.

Having served in the Indian Peace Keeping Force in Sri Lanka as part of Operation PAWAN, an intervention that the Indian Political Leadership, Bureaucracy and the Military Leadership keep the Covid like distance from the contributions made, so much so even after 35 years, the Army HQ has allowed a wreath laying at the National War Memorial on 29th July 2022, to be led by GOC IPKF Lt Gen AS Kalkat and the Veterans of Operation PAWAN. It will be a silent solemn occasion not as per the Military Traditions of the Buglers sounding the Last Post and the Shok Shastra, followed by 2 minutes silence and the Rouse sounded as having honoured our Bravehearts killed in action, the soldier stands resolute to take on the next task assigned.

With this legacy which has existed, it would be a sincere and candid advice, we should not be exploring the Military Intervention other than a Humanitarian Aid Disaster Relief mission which should be undertaken.

Sri Lanka has its armed forces intact as well as its law enforcement as well as other government functionaries are intact and they need to be supported with resources to enable them to govern. The Indian Government while providing Humanitarian Aid also needs to approach the World Bank, Asian Development Bank and others who need to address the larger picture of creating an Economic Aid to help the smaller Nations to offer such relief from the Chinese Dragon.

Unfortunately, Europe/ US and UK are focused on Ukraine, not realising that China has been exploiting the environment to meet its National Interests. This threat has to be mitigated both economically as well militarily.

Are the World Leaders focused on the challenges mentioned above; unfortunately, no. The Geo Political situation is in a state of flux as US, UK, France, Germany on one side; Saudi Arabia, Iran, China and Russia on the other side; Japan hit by the assassination of Shinzo Abe and its ramifications on the Quad and the impact in the Pacific as well as the Indian Ocean region needs to be focused upon over the next few weeks.

In this flux, will China make a move towards Taiwan, be more belligerent in the South China Sea and the Senkaku Islands, needs to be watched with care.

Under the circumstances, much as we would want to participate in Out of Area Contingencies, it seems a distant dream as our defence forces are challenged with manpower, equipment and modernisation challenges; it will be a decade or two before we would be a potent force to take on these missions with both responsibility and accountability.

Rome was not built in a day.

(The author is an Indian Army Veteran. Views expressed are personal and do not reflect the official position or policy of Financial Express Online. Reproducing this content without permission is prohibited).

A prominent Perth family is set to purchase the sub-regional asset.{...} RECONNECTING with family, getting tangled in an unusual situation, and referencing Pinoy culture, all happen in the film Easter Sunday,{...}