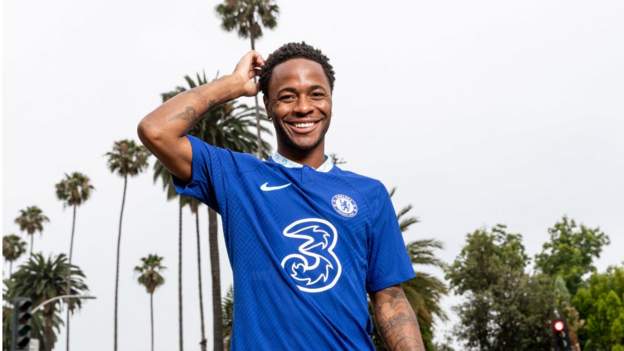 Chelsea have confirmed the signing of England forward Raheem Sterling from Manchester City in a £50m deal.

Sterling, 27, has signed a five-year contract at Stamford Bridge.

City signed Sterling from Liverpool in a £49m deal in 2015. He went on to score 131 goals in 339 games, winning four Premier League titles.

“I’ve obviously achieved a lot in my career so far, but there is still so much more to achieve and I’m really looking forward to doing that in a Chelsea shirt, under Thomas’ management,” said Sterling.

“London is my home and where it all started for me, and it’s amazing I now have the opportunity to play in front of friends and family week in, week out at Stamford Bridge. I’m really looking forward to meeting the fans there soon.”

He added: “I can’t wait to get going now and continue to do my talking on the pitch.”

Sterling’s deal is worth up to £50m including add-ons. He had one year left on his contract at City and had attracted interest from major clubs overseas.

He has linked up with the Chelsea squad in Los Angeles for pre-season.

Chairman and co-controlling owner Boehly said: “Raheem Sterling is a serial winner and his signing is an important step in strengthening our squad. We are delighted for Raheem to return to London with Chelsea, and we look forward to seeing his world-class talent on display at Stamford Bridge.”

‘One of City’s greats’

Earlier Sterling posted a goodbye message saying he was leaving City “as a man” adding: “Seven seasons, 11 major trophies, a lifetime of memories.”

In a statement, City paid tribute to Sterling calling him “one of the club’s greatest modern-day players”.

Since Pep Guardiola became City manager in 2016, only Sergio Aguero (124) has scored more goals for City than Sterling (120).

City director of football Txiki Begiristain added: “Raheem has been a wonderful servant for Manchester City, and he leaves our club on the best terms possible having helped us win yet another Premier League title.

“He has played a very important part of the successes we’ve had in recent seasons and his dignity on and off the field has been an inspiration to many.

“He will be forever part of Manchester City and we wish him well in the next chapter of his career and he departs knowing he will always be welcomed at this football club.”

Sterling’s opportunities were restricted by last summer’s signing of Jack Grealish, while forwards Erling Haaland and Julian Alvarez have arrived at Etihad Stadium this summer.

Sterling was on the bench for both legs of the Champions League semi-final defeat by Real Madrid and the epic final game of the season against Aston Villa.

However, he did spark that memorable last-day comeback by setting up Ilkay Gundogan’s crucial first goal as City came back from 2-0 down to win 3-2 and pip Liverpool to the league title.

Chelsea boss Tuchel was looking to boost his attacking ranks after Romelu Lukaku rejoined Inter Milan on a season-long loan.

The Belgium striker was the Blues’ top scorer last season with 15 goals in all competitions, narrowly ahead of Kai Havertz (14) and Mason Mount (13).

Find all the latest football transfers on our dedicated page.

The state of social care in England has “never been so bad”, the country’s leading social services chief has said,{...} This article was supposed to be a considered look at whether or not this mini-budget will generate the growth it{...}

A third teenager has been charged over the fatal stabbing of two 16-year-old boys a mile apart in south-east London,{...}