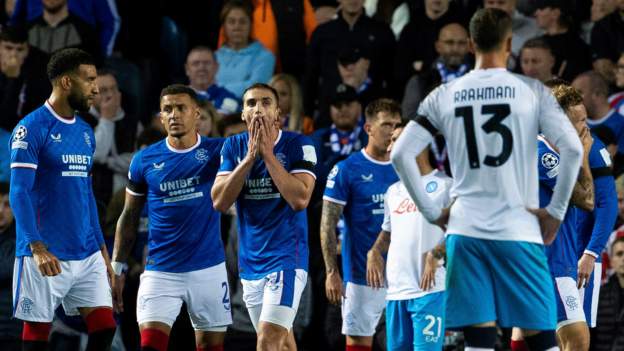 Ten-man Rangers fell to their third consecutive heavy defeat without scoring despite a more encouraging performance against Napoli on a dramatic night in the Champions League.

Matteo Politano’s penalty and late strikes from Giacomo Raspadori and Tanguy Ndombele secured victory, but only after Allan McGregor twice denied Piotr Zielinski from the spot.

James Sands was sent off for conceding the first penalty and, though McGregor saved twice following a VAR check for encroachment, he did not deny Politano.

The Italian forward put the ball low into the corner beyond the reach of the 40-year-old Rangers keeper after Borna Barisic was penalised for handball.

Victory means Napoli top Group A with maximum points after two games, with Rangers winless ahead of back-to-back meetings with Liverpool next.

Those matches will prove another stern test for Giovanni van Bronckhorst’s side, but this performance will provide more hope than their recent 4-0 defeats at the hands of Ajax and Celtic, despite the scoreline.

Until going down to 10 men, this was much more like the Rangers of last season’s Europa League, as they played with more energy from the start, after an emotionally-charged Ibrox paid tribute to Queen Elizabeth before kick-off.

Alfredo Morelos – starting for the first time since March – headed over after just 35 seconds as Rangers hunted Napoli high up the pitch. Scott Arfield forced a fine save from Alex Meret before the break and Connor Goldson went close shortly after the interval with a header.

Even as Napoli continued to threaten, McGregor – returning to the team due to Jon McLaughlin’s injury – was set to become the hero again when he denied Zielinski after Sands felled Giovanni Simeone in the box when he was clean through.

Politano swept in the rebound, but was judged to have encroached after a lengthy VAR check. That meant Zielenski stepped up again, but the Pole found no more joy the second time round as he went for the same corner.

But Napoli – who also created plenty of chances before eventually breaking the deadlock – kept coming and Politano got his goal when Barisic’s outstretched arm blocked a goal-bound shot, resulting in another penalty.

From there, Rangers struggled as Napoli used the strength of their bench to kill the match.

Raspadori only needed a sniff in the box to lash beyond McGregor, while Ndombele was imposing and swept home nicely after a tidy lay off from Andre-Frank Zambo Anguissa.

It was another brutal lesson for Rangers against a top-quality team, as if they needed it following a difficult opening match in Amsterdam and with back-to-back games with Liverpool to come.

After a difficult fortnight, Rangers manager Van Bronckhorst got the response he would have wanted from kick-off, as his side turned in a much better performance.

Morelos, despite lacking sharpness, was much more of a handful for Napoli’s centre-backs when the ball wasn’t in the box, and he allowed Rangers to attack from deep and cause problems.

The team were applauded off vociferously at half-time, a signal of their improvement.

But as is always the case at this level, if you don’t take your chances and switch off for a few seconds, you get punished. Sands’ desperation to stop Simeone ended in the harshest punishment, as Napoli took advantage despite McGregor’s attempts.

With Liverpool home and away to come, qualification looks a tall order. But at least there is something to build on for Rangers, despite another chastening scoreline.

Rangers manager Giovanni van Bronckhorst: “The performance was really good, the result wasn’t good. I don’t think we deserved a 3-0 loss. We were well in the game from the first minute with some big chances.

Rangers are at home to Dundee United in the Scottish Premiership on Saturday (15:00 BST).

A traditional Hawaiian poké restaurant is opening in Wimbledon, bringing a taste of Island life to south west London. Island{...}

Dave Bradshaw was officiating the clash between Platt Bridge and Wigan Rose when he brandished a red card to one{...}

News Police have issued a picture of a man they want to speak to as they investigate the incidents. Police{...}