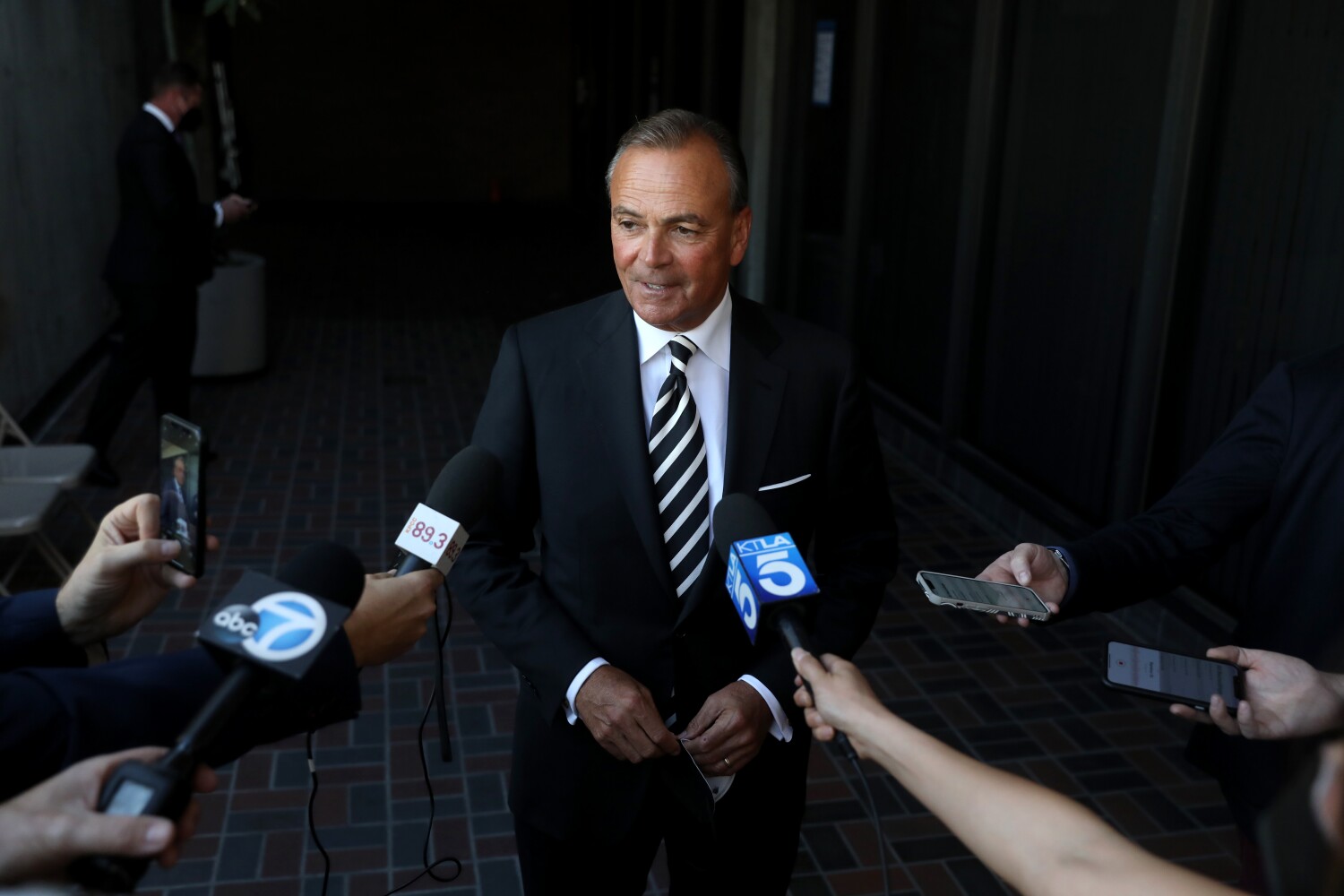 Businessman Rick Caruso missed nearly 40% of Los Angeles Police Commission meetings when he served on the volunteer panel two decades ago, an attendance record far worse than his fellow commissioners.

Caruso has called his service on the commission one of his top qualifications to become mayor of Los Angeles. But during his tenure from 2001 to 2005 he missed 53 of 139 regular and special meetings, an absentee rate of 38%.

The billionaire mall developer also arrived late for a dozen meetings, according to the panel’s records, reviewed by The Times. The public record has a gap of about two months at the start of Caruso’s tenure, so the picture of his service is incomplete.

During the bulk of his time on the commission, Caruso recorded a substantially poorer attendance record than others who served during the same nearly four-year period. Commissioner Rose Ochi missed 17 (or 12%) of the meetings while David Cunningham III missed just four (less than 3%) of the sessions.

Caruso’s attendance at the meetings fell off markedly over the course of his service. In his first year, when he served as commission president, he missed five of 30 meetings. In the final year for which records were maintained, he missed slightly more meetings (22) than he attended (21).

“Your most basic responsibility is showing up every week and showing up on time. There are just no shortcuts to properly doing the work of a police commissioner, ”said Matt Johnson, who served as Police Commission president under Eric Garcetti and now supports Rep. Karen Bass for mayor.

Caruso defended his record, saying he consulted with others on the commission and then-Chief William K. Bratton, to make sure he never missed a meeting where his vote was critical or progress would have been slowed by his absence.

He said that even when he missed commission meetings, he spent 15 to 20 hours a week at community gatherings, police roll calls and other events to monitor the work of the LAPD.

He recalled that when he was commission president, from 2001 to 2003, the workload amounted to a full-time job. By his later months on the commission, he said that the management team led by Bratton had important reforms well under way and more frequent attendance at commission meetings was not as crucial.

“We had a good commission, things were in good shape, the department was rolling forward,” Caruso said. “So I was there when I needed to be there. … I never missed a critical meeting. I worked too hard to get the department to where we were. ”

An LAPD webpage describing the role of commissioners says they “routinely spend 25-50 hours per week on commission business, and serve as the citizens’ voice in police affairs and as a means of ensuring more responsive and effective city government.”

Caruso, 63, touts his record on the five-member commission in his bid for mayor. He has also leaned on endorsements from Bratton and the union that represents rank and file LAPD officers.

In his television ads and public pronouncements, Caruso has claimed an outsized role in the operation of the department, including the hiring of Bratton, the adoption of reforms to correct civil rights abuses and the improvement in public perceptions of the LAPD.

Caruso was appointed by Mayor James K. Hahn in 2001, and his tenure included the controversial decision to deny Chief Bernard C. Parks a second five-year term.

City records show that Caruso attended most of the commission’s sessions in 2002, missing four.

Among the topics in later years when he was marked absent: whether restraints should be used on suspects being transported by ambulance; the state of gun trafficking in LA; shootings and the use of force by officers; a performance review for Bratton and a plan to reorganize the office of the Inspector General, the official charged with reviewing police misconduct.

Johnson called sessions reviewing use-of-force incidents among the commission’s most important duties. “If over a third of the time you are not showing up at the meetings, that means you are not fulfilling that very fundamental responsibility,” he said.

The critics did not point to specific instances when Caruso’s absence delayed or altered the commission’s decisions.

Caruso said his work as commission president amounted to a “24-7 job,” adding that, beyond meetings: “You’re rolling out to crime scenes at night, you’re doing a lot of town hall meetings. So you take the first two years, it was effectively a full-time job for me on top of my other full-time job ”as a real estate developer.

With Bratton in charge and his confidence in LAPD management greatly increased, Caruso said that in his second two years “it was more important to me to be out in the community. … I was at roll calls, constantly, at community meetings, constantly, and doing a lot of work at City Hall on police. ”

He said he consulted with Bratton and Cunningham, the latter his successor as commission president, to make sure he did not miss any meetings they considered critical. Bratton has endorsed Caruso for mayor, describing him as a first-rate manager. Cunningham, now a Superior Court judge, said his judicial duties preclude him from commenting on political matters.

Caruso said it would be unfair to judge him merely on meeting absences.

“I do not think you get judged on your attendance record, alone,” he said. “You are looking at the totality of the impact you make, right?”