Officials in Lviv said seven people were killed in Russian missile strikes on the city in western Ukraine on Monday as Moscow’s brutal siege of Mariupol in the country’s south-east appeared to be entering its final stages.

Andriy Sadovyy, Lviv’s mayor, reported “five targeted missile strikes” on the city, a haven for people fleeing violence in the rest of the country. Maksym Kozytskyi, Lviv’s regional governor, said in an update published after noon on Monday that seven people had died in the attacks and another 11 had been injured, including a child. He said that Russia had fired four cruise missiles, which, based on preliminary information, were believed to have been fired from the Caspian Sea region.

The attacks came after Ukrainian officials claimed that civilians in Mariupol, including children, were sheltering alongside the last group of fighters under a steelworks in the blocked city. About 2,000 Ukrainian troops remain, despite a Russian ultimatum that they surrender.

Ukrainian security services (SBU) have also released a video in which Viktor Medvedchuk, Russian president Vladimir Putin’s closest ally in the country, asked to be exchanged for Ukrainian forces and civilians still trapped in Mariupol.

The SBU said Medvedchuk, who escaped house arrest on treason charges at the start of the war in February, had been arrested last week while Russia’s FSB security service was trying to evacuate him to Transnistria, a pro-Russian separatist region in Moldova. It added that about 120,000 civilians remained in Mariupol, where Kyiv’s 36th Marine Brigade and the ultranationalist Azov Battalion are holding out against the Russian siege.

Almost immediately afterwards, Russian TV showed a video of Shaun Pinner and Aiden Aslin, two British fighters captured in Mariupol, who asked UK prime minister Boris Johnson to exchange them for Medvedchuk. The men said they were being treated well but offered no further details on the circumstances of their captivity.

Mykhailo Vershynin, Mariupol’s patrol police chief, told the city’s TV channel that the civilians had taken refuge in the Azovstal steelworks because “it’s a hiding place that allows them to survive for a certain time” during Russia’s intense bomb, missile and artillery attacks.

“According to my information, [in] the territory of the factory of Azovstal, there really is a large number of civilians. Including women, children, old people and orphans, ”he said.

Vershynin also told the outlet that Russian and Moscow-backed separatist forces who now controlled most of the port city were paying civilians in food to help remove rubble, collect corpses and dig mass graves.

Separately, two Ukrainian officials posted images of a small girl they said was living in bunkers beneath the Azovstal plant, a Soviet-era facility with a concrete and steel infrastructure that has allowed Mariupol fighters to survive the most intense bombardment of the war.

“Meet Alisa, she is four years old. Fifty days of her life she spent with her mother in a bunker on the territory of the Azovstal plant during round-the-clock bombing, ”Arsen Avakov, a long-serving former minister of internal affairs, wrote in a Facebook post that included a video of a small girl that he said was sent from Mariupol. Mykhailo Podolyak, an adviser to Ukraine’s President Volodymyr Zelensky, posted a photo of the same child on Twitter. 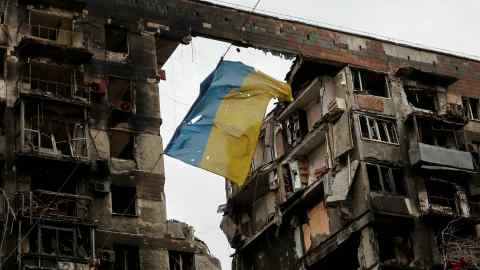 Ukrainian and Russian claims about the conflict could not be confirmed. Ukrainian marines, soldiers, border guards and fighters from the Azov Battalion paramilitary group were among the fighters remaining in Mariupol. A senior Azov figure who is in touch with the fighters told the Financial Times at the weekend that the Ukrainian troops in the city were running short on food, drinking water and medicine.

Moscow has also intensified attacks elsewhere in the Donbas region of eastern Ukraine, where Putin’s troops are trying to gain territory after failing to establish control of the capital Kyiv during the first phase of the war.

“Unfortunately, the Ukrainian side is not demonstrating any particular consistency on what has been agreed,” Peskov told reporters, according to Interfax. “But the military operation is ongoing.”

Putin has given one of the units Ukraine claims is responsible for war crimes an honorary title. In a message to the 64th Motor Rifle Brigade, Putin said the designation of “Guards” was a “high honor and recognition of your merit [and] mass heroism]. ” Ukraine’s armed forces say the brigade was responsible for “mass murder and torture” in the town of Bucha, where it discovered hundreds of murdered civilians when Russia withdrew earlier this month.