Just weeks before a new law takes effect requiring most employers to post salary ranges in help wanted ads, City Council members are moving to postpone it – and make changes that the law’s proponents warn would “gut” the measure’s aim to promote equal pay.

Business leaders say the revisions, slated for a public hearing on Tuesday, are the least the Council can do to head off what they warn could be unintended effects.

The salary transparency law, which garnered the approval of 41 of 51 members in the final days of the Council’s last term, mandates that businesses with five or more employees post a “good faith” minimum and maximum salary in advertisements for job openings.

The measure was intended to advance pay equity, in part by giving job-seekers a leg up in wage negotiations, while spurring transparency from employers.

In New York City, white women earn 84 cents on average for every dollar earned by white men, according to a December 2021 committee report by the City Council. The figures are 63 cents per dollar for Asian women, 55 cents for African American women and 46 cents for Latina women.

The new amendments, sponsored by Councilmembers Nantasha Williams (D-Queens) and Justin Brannan (D-Brooklyn), would exclude businesses with fewer than 15 employees, allow for hiring notices that do not specify a position to exclude salary info, and exempt remote positions that can be done outside New York City.

The bill would also delay implementation, which is being overseen by the city’s Human Rights Commission, from May 15 to November 1. The commission has already released guidance.

Advocates for pay equity who supported the new law say the changes would create massive carve-outs under the guise of making minor calibrations, excluding tens of thousands of businesses. 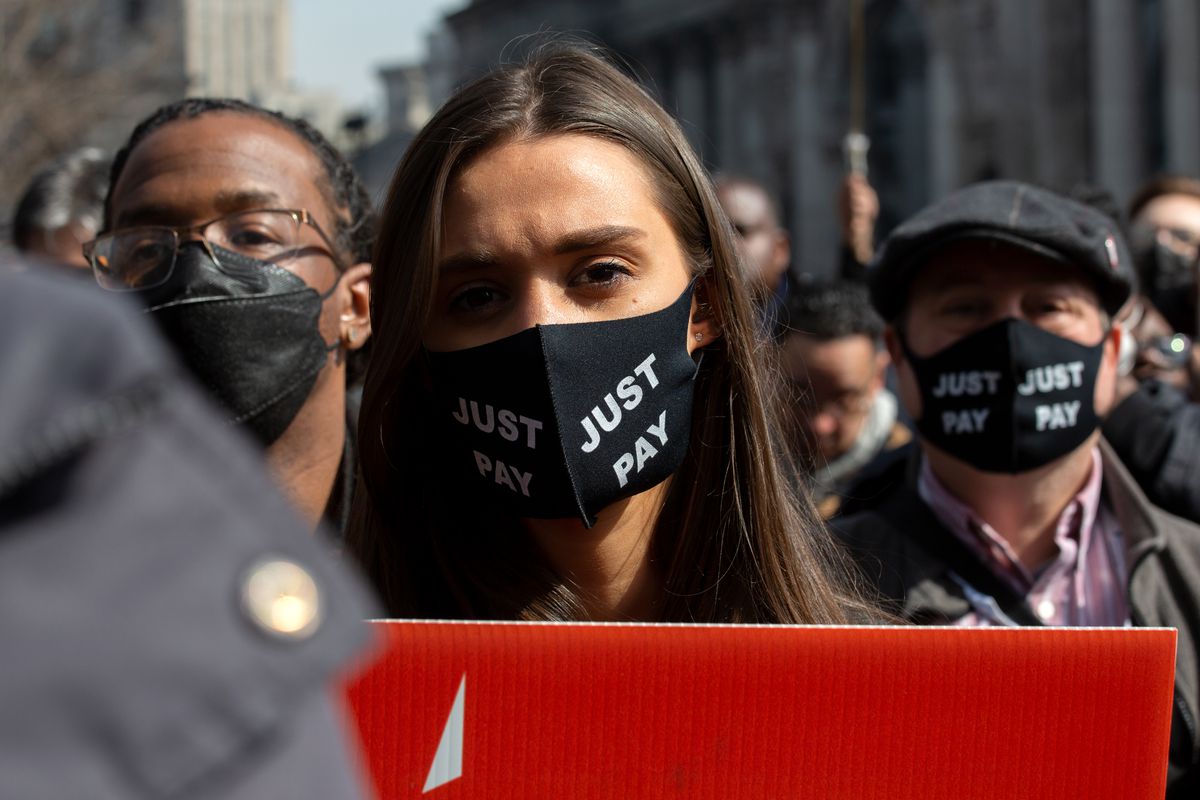 “The amendments being proposed really gut the law – the intent and the impact and the scope of the law,” said Beverly Neufeld, president of the advocacy group PowHer New York, which promotes women’s economic equality. “Turning our back on this – it’s really not what we expect from our progressive, majority-female City Council.”

Business leaders say the pay transparency law posed a host of problems that never got fully aired because the bill was rushed from public hearing to vote over a two-week period in December.

It became law automatically after 30 days without the signature of outgoing Mayor Bill de Blasio or incoming Mayor Eric Adams.

Kathryn Wylde, president of the business group Partnership for New York City, said small businesses do not often have established pay bands – instead offering what they can afford based on an applicant’s range of skills and experience.

Among the other concerns, she said larger businesses risk getting out-bid by competitors if they make their salary ceilings public. She said the public postings could also spark salary inflation during a hiring crunch when current workers see a maximum posted that’s much higher than what it’s been historically.

“We all agree that pay parity is a good thing,” said Wylde, whose organization represents about 300 company leaders. “Implementation is difficult – so we’re hoping that the new Council will feel they can be a little more thoughtful about responding to some of the concerns.”

Wylde and her organization have lobbied two high-ranking officials in the Eric Adams administration regarding the proposed bill – intergovernmental affairs director Roberto Perez, and counsel to Mayor Brendan McGuire, according to city lobbying records.

City Council press secretary Breanna Mulligan said Tuesday’s hearing will allow members to “hear from all stakeholders about how the salary transparency law can be most effectively implemented to address salary inequities for women and people of color.”

Council Speaker Adrienne Adams (D-Queens) was among the members who voted in favor of the disclosure law in December, before she was named speaker by her colleagues a month later.

Adrienne Adams also appeared at a rally at City Hall last month on Equal Pay Day, where she highlighted the disparities in pay between women and men.

Bill sponsor Williams, who chairs the Committee on Civil and Human Rights, did not respond to a request for comment.

States in Play on Pay

In 2018, California enacted a pay transparency law that required companies to provide salary information – but only upon request from a job applicant.

More recently, states have passed laws that require a more proactive release of salary information, although not necessarily for public dissemination.

Colorado enacted a law last year that, like New York City’s, requires salary ranges to be posted in job listings.

Last month, the city Human Rights Commission published guidance on which city businesses and nonprofits are covered by the new law and how they need to implement it.

When it comes to the proposed changes to the city’s law, advocates say the exclusion of companies with five to 14 workers alone would exempt roughly 50,000 employers.

They also worry that an exemption for ads that do not specify which position is being hired for would create a giant loophole for any firms seeking to evade the new requirements.

“While the amendments are being sold as innocuous tweaks, when you read them closely they would essentially undo much of [the new law]”said Seher Khawaja, senior counsel for Legal Momentum, a national advocacy group for girls and women.” We think it would really undermine the impact of the law by excluding a large sector of New York’s workforce from the protections. “

THE CITY is an independent, nonprofit news organization dedicated to hard-hitting reporting that serves the people of New York.