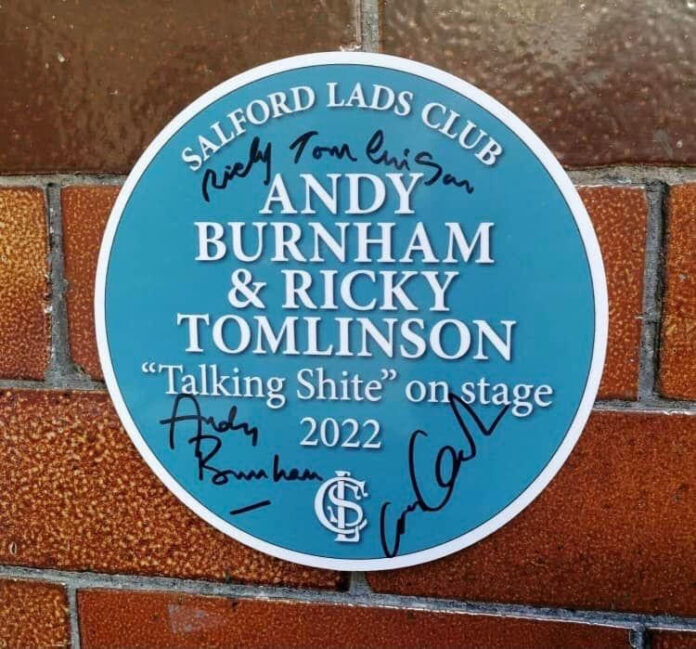 Salford Lads Club is a regular location for many television dramas and films, including Cold Feet, Coronation Street and Last Tango in Halifax. Eagle-eyed Peaky Blinders fans may have spotted the iconic venue ~ heavily disguised as a Methodist Hall where Tommy Shelby was giving a speech ~ in its most recent episode on Sunday.

Introduced in the packed-out venue by singer, Rowetta ~ who has performed on the same stage herself with The Christie Choir ~ Andy and Ricky chatted for two hours, covering many topics, including his television and film roles over the years, growing up in Liverpool and how he fell into acting.

Throughout the evening, Ricky was hilarious and animated and had the audience roaring with laughter one minute and in tears the next! The audience included Ricky’s co-star and co-writer of The Royle Family, Craig Cash, Coronation Street’s Jennie McAlpine aka Fiz, musician / DJ, Clint Boon and poet Tony Walsh. Andy reminded the audience about when Tony read out his poem, ‘This is the Place’ on the steps of the Town Hall when talking about the city coming together after the bomb almost five years ago and what an impact it had worldwide.

In the second half, Andy read out several questions from the audience to Ricky, ending the session with his own question. As a fellow Liverpudlian, Andy wanted to know what Manchester meant to him. Ricky said he loved the place and the friendly rivalry between the two cities, and he acknowledged how similar they were: “I love Manchester… but I just love everyone!” he quipped, which got a massive round of applause.

reduced many in the audience to tears. Ricky also relayed many stories of his time on Mike Bassett and The Royle Family.

Though not a big fan of ‘the other’ royal family, Ricky finished off with a hilarious anecdote about Norman Wisdom receiving a knighthood from the Queen. Norman told Ricky that he was more nervous than usual because of the prestigious nature of the event. Seeing this, Prince Philip called Norman over and chatted to calm him down. Suddenly there was the noise of a brass fanfare, and Norman asked the Prince, “What was that?” The Prince replied, “That’s the Queen.” Norman quickly retorted, “Wow, she can really play that trumpet.”

Both Andy and Ricky gave a lot of their time chatting to members of the audience during and after the event and having photos taken. Ricky said he really enjoyed visiting Salford Lads Club and would love to come back again!

The event was a huge success, with much-needed funds raised for Salford Lads Club. Andy, Ricky and Craig have all signed ones of the venue’s ‘Comedy Blue Plaques’ made to commemorate this event which is being auctioned now: