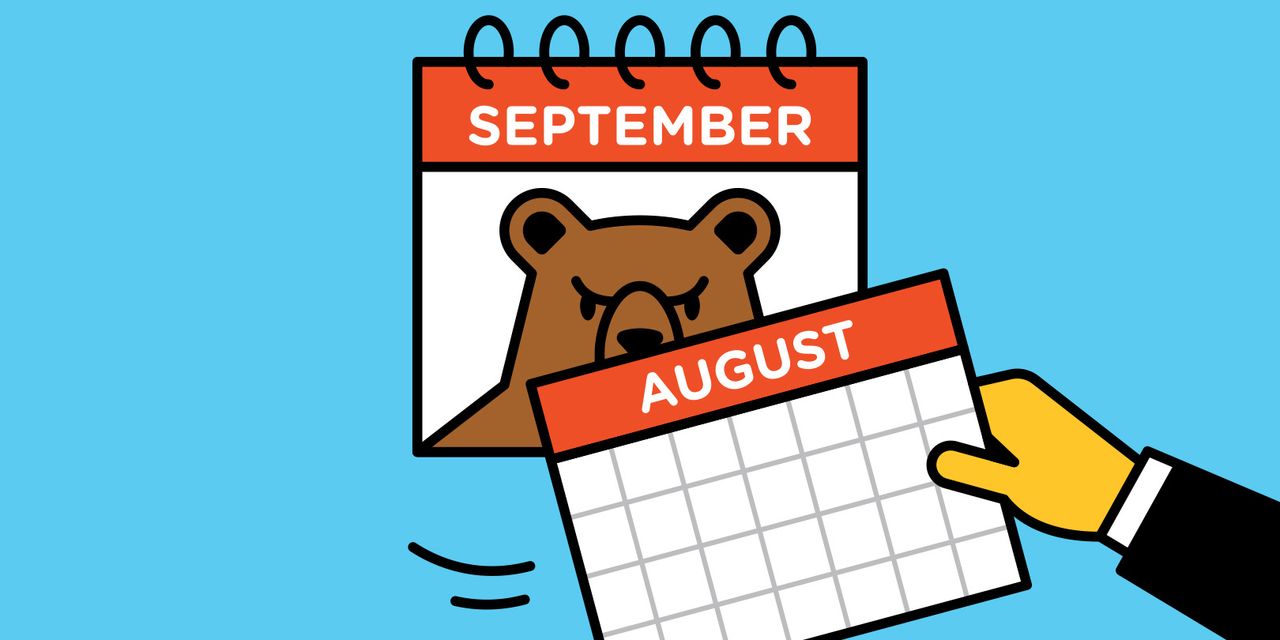 Stocks in September Have Often Struggled. The Good News: The Selloff May Have Already Begun.


The stock market’s worst month—September—will soon be upon us. The


Dow Jones Industrial Average
has notched a similar September loss going back to 1896. It’s clearly the bad month for both indexes. Last year, stocks fell 4.8% in September. And who can forget Lehman Brothers? And, well, Sept. 11?

Much debate has gone into explaining the September Effect. More tangible are troubling signs for this September. Indexes are up by double digits in percentage terms since their 2022 lows in mid-June, lifted by cooling inflation and a cautious Federal Reserve. But the probability of a three-quarter point interest-rate hike in September has risen, with a half-point raise less likely.

Then there are oil prices, which sagged, putting extra money in consumer pockets. The price of West Texas Intermediate oil has hung in the low $90s per barrel, but edged up this past week on Saudi suggestions of an output cut. Oil’s multiyear high, hit earlier this year at over $100, is more than 10% above the current level. Oil prices have been hurt by China’s economic slowdown. But China just cut a key rate, which could send prices rising again. Likewise, protracted war in Ukraine could push up energy prices again as winter nears.

equity strategist Julian Emanuel believes that the market’s recent ability to rise despite rising rates will fade. The good news: September selling may have already begun. The Dow and S&P 500 have been down since Aug. 20, with the latter off about 4%. Let’s get it over with.

The Federal Reserve Bank of Dallas releases its Texas Manufacturing Outlook Survey for August. Consensus estimate is for a negative 12.3 reading, about 10 points better than in July. Four of the five regional federal reserve bank surveys of business conditions have had at least one negative print in the past two months, portending a significant slowdown in the manufacturing sector. Earlier this month, the New York Fed’s Empire State Manufacturing Survey posted its second-largest-ever decline.

The Bureau of Labor Statistics releases the Job Openings and Labor Turnover Survey. Economists forecast 10.3 million job openings on the last business day in July, almost 400,000 fewer than in June. Job openings remain elevated historically but are off their peak of 11.9 million from earlier this March.

S&P CoreLogic releases its Case-Shiller National Home Price Index for June. Home prices are expected to jump 19.5% year over year, after increasing 19.7% in May. New- and existing-home sales have plummeted this year, but home prices remain near record highs.

The Conference Board releases its Consumer Confidence Index for August. The consensus call is for a 96.5 reading, about one point more than July’s 95.7 figure. The index has declined for three consecutive months.

Cos., MongoDB, Okta, and

The Institute for Supply Management releases its Chicago Business Barometer for August. Economists forecast a 51 reading, roughly one point less than in July. July’s 52.1 reading was the lowest for the index since August 2020.

The BLS releases the jobs report for August. Expectations are for nonfarm payroll employment to increase by 270,000, after a gain of 528,000 in July, which was more than double forecasts. The unemployment rate is seen remaining unchanged at a near-record-low 3.5%.

Write to Jacob Sonenshine at jacob.sonenshine@barrons.com

Veselka is serves from its original location, which opened in 1954 in Manhattan’s East Village neighborhood. CNBC Make It It’s{...}

Israeli surgical intelligence company Theator the completion of a $24 million Series A extension financing round, follows an initial{...}