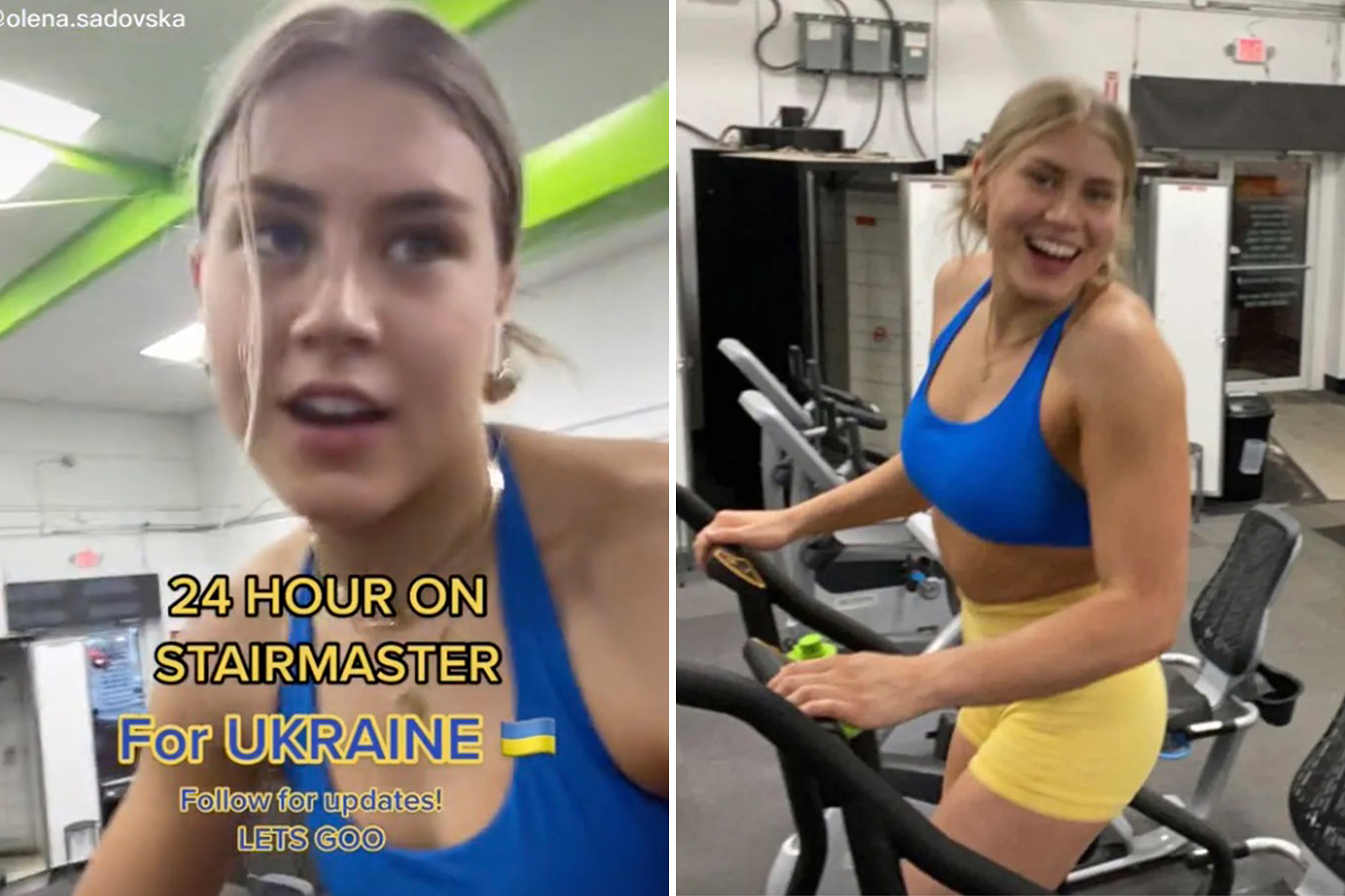 An 18-year-old athlete climbed her way to $ 12,500 in support of the country of Ukraine after she walked a stair climber for 24 hours at her local gym.

Originally from Ukraine, Sadovska told Fox News Digital that she was born in Lviv. When she was 9 months old, her family moved to the US – Ohio, specifically.

Aside from her parents, her brother and an aunt and uncle, all other members of Sadovska’s family are still in Ukraine. Hosting a fundraiser to support her home country seemed like the natural thing for her to do.

She added, “They’re in their basement and [are] just trying to do their best to stay calm and stay safe. ”

To raise funds for those struggling in Ukraine, Sadovska walked on a stair climber from 6 am on Saturday, March 26, until 6 am on Sunday, March 27.

Sadovska – who lives in Cleveland who will be swimming for Ohio State University this fall – livestreamed the fundraiser on TikTok for the full 24 hours. She also posted several videos of the event on her TikTok page.

Roots of her inspiration

Sadovska said she was inspired to hold a fundraiser after she learned that members of a swim team in the UK, at the University of Central Lancashire, were swimming 346.4 miles – that’s the total area size of Ukraine.

“Obviously, it was something crazy that they did,” Sadovska said, adding the team swam in support of Ukraine.

That “crazy” fundraiser inspired her to think of her own project.

“I knew [that working out on] the Stairmaster was hard. I knew it would grab a lot of attention, so I decided to do that and see how much money we could raise, ”Sadovska said.

“All of those [videos] were blowing up, so I decided to do 24 [hours]”Sadovska said.

Although she is an athlete and regularly works out, Sadovska said she did not do any special training or preparation for her fundraiser.

She also said she had only worked out on a stair climber “a couple times” before the 24-hour challenge. “I just went into it and hoped for the best,” Sadovska said.

Friends were “supporting me”

Sadovska said that once she got started, the first 12 hours of her fundraiser were “fine.”

“The time was going by fast,” she said. “I had the viewers on the [TikTok livestream] and my friends around me, pushing me and supporting me. ”

She said that for the first 12 hours, her two best friends were with her to refill her water, give her snacks and keep her company.

At the halfway point, another friend arrived and spent “multiple hours” with her, even joining her on the stair climber beside her for an hour. That friend also came back at the end of the fundraiser and did the stair climber again for Sadovska’s last hour.

Even with the help, though, things got tough, Sadovska said.

“After the 12-hour mark, I had my 10-minute break – which was the longest break I had – and then from there, time just slowed down so much,” she added. “That’s when the pain was really bad.”

Though she did think about stopping “multiple times,” Sadovska said she was encouraged by her friends who were with her at the gym and her viewers on the livestream.

“I knew I had to keep going, because the longer I went, the more money I would raise,” she said.

Sadovska also got news early on that gave her extra motivation when things got tough.

“It was getting really difficult,” Sadovska said.

“But my parents actually called me when I was a couple [of] hours into this fundraiser. They told me that a missile landed two miles away from where I used to live and where my family currently lives in Ukraine. ”

“That was my biggest motivating factor,” she added.

During the climb, Sadovska said she did not listen to any music or podcasts and instead, she was airing her livestream. She also took a few short breaks, which she did not include in her 24-hour countdown.

“Not the healthiest, but it kept my blood sugar and glycogen high so I could push through the 24 hours,” Sadovska said.

She added that she also had “tons of water,” sports drinks and electrolyte drink mix on hand.

Decrease your chance of injury“

Dr. Robert Parisien, an orthopedic sports medicine surgeon at Mount Sinai in New York City, told Fox News Digital that for an average person to do a 24-hour stair climber workout, that person would need to prepare for at least three months, “if not longer, ”in order to prevent injury and do the event safely.

Average people who may be considering doing an event like Sadovska’s should make sure they have a solid base of physical fitness; they should also taper their workouts before the event. That way, their muscles can recover and be at “peak physical condition” in time for the event, Parisien said.

He also encouraged people to make sure they have appropriate gear and equipment on hand.

That includes petroleum jelly, bandages, protective adhesive to help with blisters, as well as multiple pairs of sneakers that are already broken in, multiple pairs of socks and other dry clothes to alternate wearing during the event.

Another “vital” element to a 24-hour workout is having a nutritional plan, Parisien said.

He said that it’s important to take in carbs and calories and to be hydrating “throughout this entire event.”

“You really need to be taking in probably about 100 to 250 carb calories per hour after the first hour of competing,” Parisien said. “You can not just go into this event without having that [nutrition] plan in place, because that needs to be organized and set up ahead of time. ”

During an event like this, Parisien said people should remember to be “slow and steady” and start out at a “conservative” pace so that they do not burn through all their energy too early.

“It may be that she has muscle strains that take days or weeks to recover from, or maybe it could even be something more severe, where you actually tear a large part of your muscle or your tendon if you’re not prepared for this event , ”He added.

In the case of Sadovska, who did not have much preparation, Parisien said that as a young, physically fit athlete, she is the exception.

Parisien said he himself has done endurance events and covered similar events as a doctor; he said he appreciated Sadovska’s efforts.

“I think it’s a wonderful thing, a very altruistic thing that she did to raise money and to utilize her skill set, which is being a young, healthy athlete,” Parisien said. “It’s very impressive.”

“It just shows the power of what any of us can do just by utilizing whatever our strengths are,” he added.

During her 24-hour stair climber workout, Sadovska collected money using a bucket beside her machine for in-person donations, as well as through her livestream and a GoFundMe page she set up. In total, she raised about $ 12,500 – way above her original goal of $ 5,000.

“It’s absolutely insane,” Sadovska said of the donations received from people all over the world. “I do not even know how it happened, but I’m so grateful.”

Sadovska said she will be giving all in-person donations that she received at the gym to a local Ukrainian bank that sends money directly to people in Ukraine.

Meanwhile, all the funds raised on her GoFundMe page went directly to the organization Ukraine Relief.

“It’s something very little and it’s not going to prevent what’s going on [in Ukraine]but it was the most I could do, so it makes me proud and happy, ”she said.

Sadovska also wanted to bring awareness to and support a no-fly zone over Ukraine. During her stair climb, she posted a petition for a no-fly zone and received 2,000 signatures.

Since she finished her fundraiser last Sunday morning (March 27), Sadovska said her recovery has gone well. She said she’s been taking Epsom salt baths and ice baths; she even did cryotherapy (cold therapy).

“The legs were really sore and the knees were in a lot of pain, but I’m almost fully recovered,” she noted.

As she’s allowing her body to recover, Sadovska is processing her newfound internet fame and will use her platform for more challenges in the future.

Sadovska said her friends and family are proud and pleased with the outcome of her viral exercise event.

“I am so blessed and grateful to have had such supportive friends by my side helping me stay positive and push through the 24 hours,” she added.