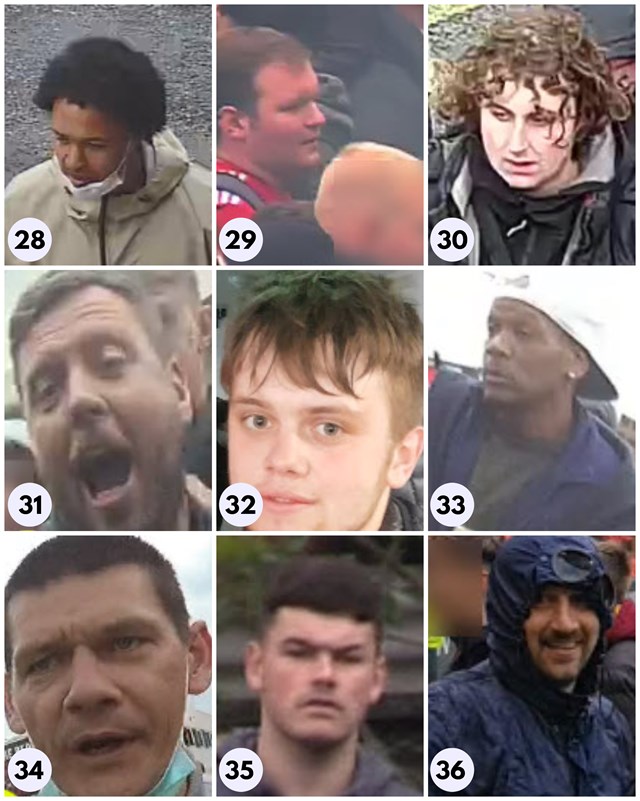 More than 1,000 protesters gathered at Old Trafford and 200 separately at the Lowry Hotel in Salford. The officers continued to monitor the situation, but the situation began to grow in hostility and protesters managed to break into the field.

Several GMP officers were left with injuries after flares were extinguished and bottles and barriers were thrown at police officers and horses.

A complete investigation was launched, and detectives have spent months following several lines of investigation and reviewing hundreds of hours of CCTV footage to identify the many people involved.

To date, 18 people have been arrested and 5 of them have been charged.

Detectives are now also able to release photos of 36 men they would like to speak to in connection with the protests, urging anyone who can recognize a person to contact police.

Detective Inspector Andy Fallows of GMP’s Major Incident Team said: “The violence and disturbance back in May, particularly against the police, was completely unacceptable and unnecessary.

“Our team has been working day in and day out since May to ensure that everyone involved is identified and facing the consequences of their actions. Today’s arrests are a significant step forward in our commitment to do so.

“We also publish pictures of men we would like to talk to, and I am convinced that there are people out there who will be able to provide us with credible information that will help us identify them. If you have any information or recordings that may help our inquiries, please contact us as soon as possible. “